The dance button is this generation's hug button.

The entirety of the Bit.Trip series, a six-game series developed by Gaijin Games, was a highlight of the WiiWare service. However, one game stood above the rest: Bit.Trip Runner. This 2010 release, a constantly scrolling rhythm-based platformer, was a delight, and while it had some issues, it was one of my favorite WiiWare games. Bit.Trip Presents Runner2: Future Legend of Rhythm Alien, debuting on the Wii U eShop, fixes the issues of the original, and improves on it in nearly every way. 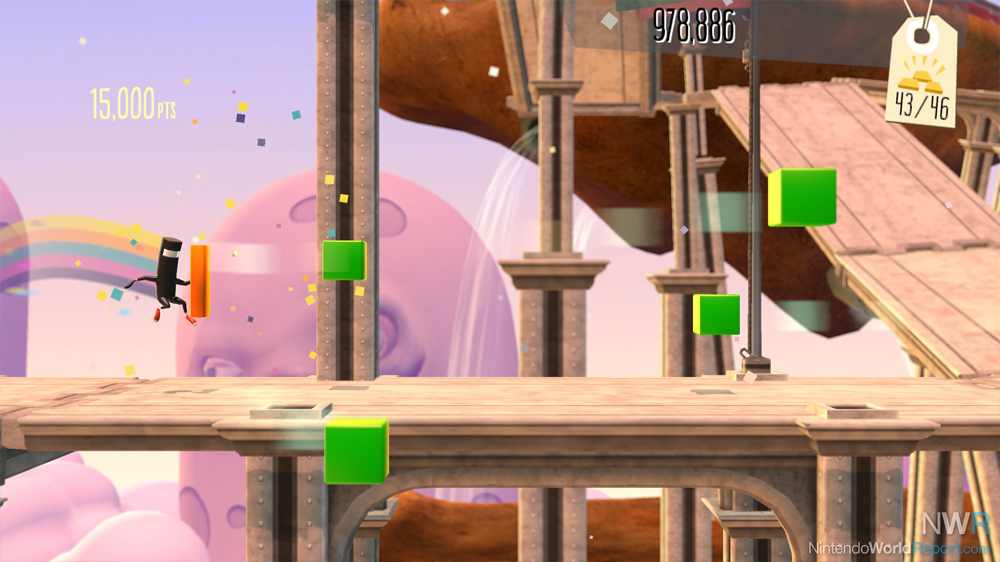 Runner2’s new graphical style is the biggest change. Now a sharp-looking HD production with vivid, whimsical animation, it improves on the retro aesthetic of the original. Don’t worry: the change is justified in the paper-thin story, and none of the charm is absent. It’s still decidedly goofy, with the trippy visuals only emboldened by the improved fidelity.

The gameplay, at its core, is unchanged. The mechanics from the original (jumping, sliding, kicking, and blocking) are all present, as are a cadre of new moves and obstacles. You grind on rails in some levels, and run over boost pads in others. Across its 100 levels, spread across five worlds, the game also throws in new additions to the formula at a rapid clip. Thanks to those innovations and to superb level design, Runner2 rarely gets dull. It also helps that nearly every level features branching paths that lead to alternate costumes or bonus, retro-themed levels. 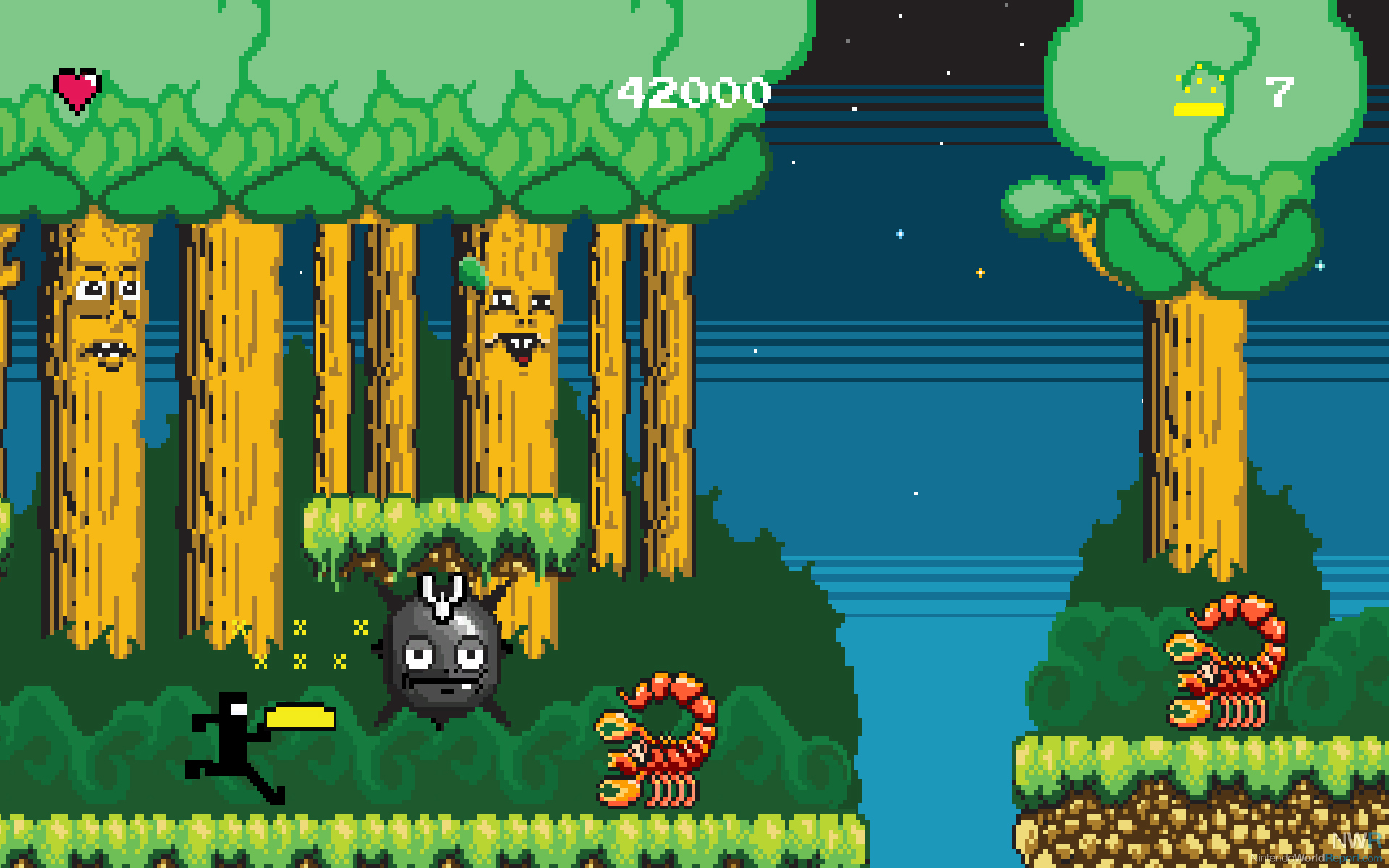 The beauty of Runner2 compared to its predecessor is its improved balance in difficulty. Every level has an optional checkpoint midway through (you get bonus points for skipping it), and the difficulty curve is much gentler. Three settings also help scale the challenge, giving Runner2 a somewhat customizable degree of difficulty. Certain parts are still challenging, such as the aforementioned retro stages, but even those pale in comparison to the brutality of the bonus Atari-esque stages in the original. Frequent checkpoints make the bosses friendlier this time around as well, making for a less frustrating experience overall.

The sound effects and music, as in the original game, work together wonderfully, building as you progress through each level. The music is catchy, and harmonizes with the gameplay in a way that’ll make you want to play level after level. The evolution of the game’s music from the first to the second game reminds me of how the music and world aesthetic evolved from Tron to Tron: Legacy, except in this case, it’s a lot more cartoony. An array of characters populate the experience as well. You start with Commander Video and CommandgirlVideo, but each world gives you the chance to unlock more characters, such as Unkle Dill (a walking pickle) and Reverse Merman, a super-disturbing abomination with a fish upper body and baby legs. 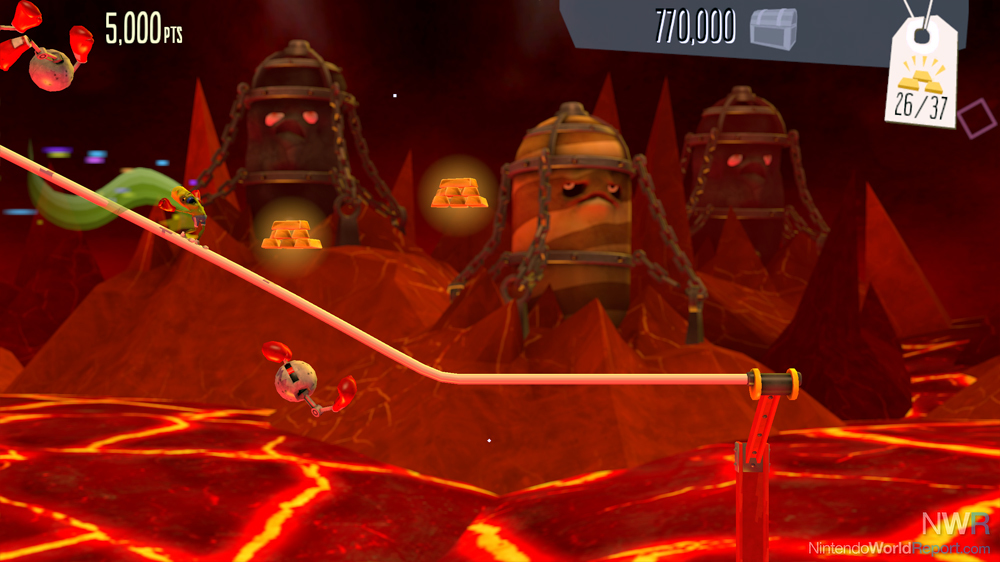 With online leaderboards that update constantly, the high score chase is ever present. Fortunately, the mechanics of the game are conducive to fine-tuning your score, whether you time “dance” moves between obstacles or avoid every checkpoint you see. The Wii U version is more or less the same experience you’ll find on other platforms, but features GamePad-only play, which, in my experience, worked with no discernable lag.

Runner2 is the type of sequel you dream happens. It takes the concepts and gameplay of the original and advances them in every way. Gaijin Games didn’t just make a great game—it made one of the best side-scrolling platformers in recent memory. We’ve had some great games on the Wii U eShop so far, but now we have the young platform’s first masterpiece.

wow, now i get all the exitement for this game in your twitter. the game looks amazing i will buy it!

So, Gaijin Games put out a list of the advantages and disadvantages of all the versions of this game. Based on what I've seen, unless you have a really nice PC, the Wii U is the best version of the game (especially with off-tv play).

In World 4, and I have a few complaints. Anything I'm not complaining about, I love just as much as Neal in his review.


1) The difficulty is stagnant as all hell, even on the "rather hard" difficulty. As of where I am now, the difficulty isn't nearly as hard as midway through World 2 in the original, and I'm skipping over every checkpoint too. And this is coming from someone who isn't even very good at these games. I hope it picks up in 5, but I really dislike that you have to specifically pick the harder level paths to get something even resembling bit.trip difficulty.


2) I don't like the checkpoints at all. I'm glad they exist, but I dislike that they don't even let me disable them in the options menu. Kind of a dick move that they would include checkpoints as an easier alternative but force you to avoid them if you don't want them (especially since accidentally passing through one requires a menu restart if you didn't actually want it). I also really hate the forced boss checkpoints. Requiring a menu restart every time you die after a checkpoint if you want actual difficulty isn't a minor inconvenience -- it's an actual flaw. Heck, even including them in the first place for bosses is a really pansy move.


3) Like half of the new moves are just rehashes/combinations of old ones or are simply tossed in and useless for level design.

It's downloading now (seriously Nintendo, get your act together re: your servers) and I'm so excited!  The original was in my top 5 games for last generation (download or retail!).

Thank you for reminding me this came out today! Looking forward to playing it even more after reading about it.

With a 10/10 review, anyone with a Wii U should be picking this up.

I am a little worried about some comments I've read that say it's too easy, but I won't know for myself until I've played it. I was a huge fan of Beat, Core, Flux and of course Runner (the other two I was less enamoured with) so I was really into the challenge of this series. Unlike a lot of people I didn't find replaying levels to be frustrating, and the high difficulty was a crucial component of those games for me. I just hope Runner 2 does not do a way with that stiff challenge completely.

I'm looking forward to trying this out for myself.

Awesome! I can't wait to play this.

No, but they all have unique animations, which are real awesome and funny to see. Also, they have a ton of different costumes.

I have heard, however, that the differences between the characters in terms of their look and animation does factor into the gameplay at a very base level. Apparently some chracters, persumably because of their shape and colour, are more difficult to make out against the backgrounds than others, and similarly some characters have animations that aren't as succinct as Commander Video's, which seems to be throwing off those people who focus on the graphics.

Rhythm Heaven does the same thing and Gaijin Games did this all the time in the Bit.Trip series, using graphics to distract and muddle the player.

It was happening to me too. I checked the Miiverse and was lucky to learn that Gaijin sent the patch to Nintendo. Now I'm just waiting for some confirmation, so I can continue playing the game without the concern of locking my system.