Naut to be missed.

As the English language evolves, so too must our dictionaries. They build upon themselves and grow to suit the needs of each generation. Borrowing heavily from such dictionaries, the Scribblenauts series is not dissimilar. It too must adapt to the expectations and trends of gaming. Over three years and just as many handheld entries, the series has morphed into the form we see today, Scribblenauts Unlimited. The question is: has it evolved well?

The premise of Scribblenauts has always been to solve problems using the in-game objects you create by writing specific words. An early example: a dirty pig needs washing. As Max, players bring up a magic book that can summon most everything written within. Type out “sponge,” and poof, it appears. Players earn Starites as they go, accruing enough of which opens more worlds to explore. In a nutshell, this is how Scribblenauts plays out, although Unlimited adds some new wrinkles. 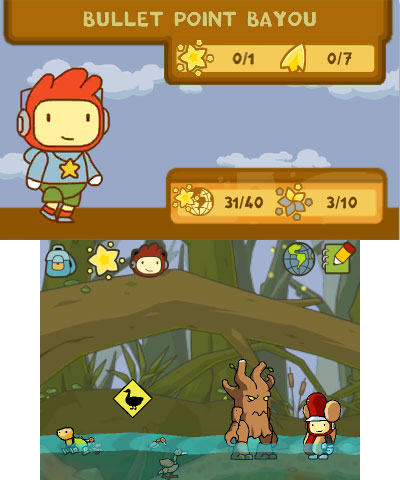 Despite its appearance, Scribblenauts Unlimited is a very different game from its predecessors. The game has definitely lived up to its title, in that it has given up on many of the series’ former rewards and punishments. You aren't punished for creating repeated objects, or for exceeding an objective's "par" (a system found in previous entries that encouraged using as few objects as possible). Lost in this transition is any sort of praise for trying new solutions and objects, though I don't see this as a negative. The points and Ollars (the in-game currency) earned in previous games were just insubstantial prizes, and added little value. Unlimited instead rewards players with the next great obstacle and challenge, and with bonuses like new playable characters earned by just playing the game normally. The game sees no point in virtual high scores, and instead offers more of itself to players for a job well done. 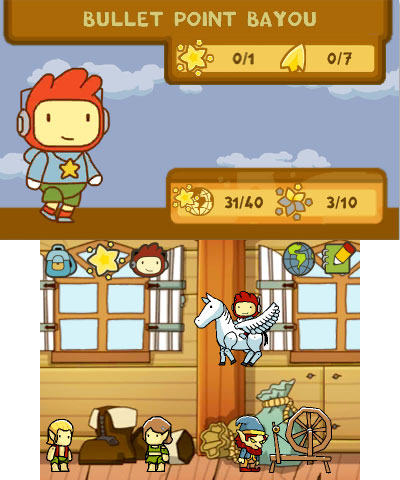 Unlimited also removes barriers from level progression. While the game's entirety isn't unlocked from the get-go, it offers far larger chunks than previous entries did. Also new to Unlimited is an area best compared to an open world that players are thrown into, which contains many missions. Its inclusion prevents the needless back and forth of level selection screens that plagued prior entries. You are able to just mill about, stumbling upon Starite missions as you tap the area’s citizens and objects. Some of these missions require you to think of just a single object to succeed. These smaller objectives earn you a Starite fragment, several of which add up to one whole, while missions that reward with a full Starite require multiple steps. An early mission tasks you with dowsing the flames of a burning house, seeking help for the pyromaniac that caused it, then providing the tools for this cured individual to rebuild it.

The objectives are always interesting, but it’s the solutions that compel. You can conjure any variety of objects to solve a problem, leading to multiple solutions. Adjectives, introduced in Super Scribblenauts, return in a refined form. By tapping an object or person, you can tack on an adjective to its name. While you can create gold bricks for a woman down on her luck, for example, simply adding "rich" to her description yields similar results. Many modern games claim to offer similar variety, but none compare to Scribblenauts Unlimited. Plus, there’s something to be said for a game that allows the freedom to solve problems without resorting to violence. A gun isn’t necessary when a jet pack will suffice. 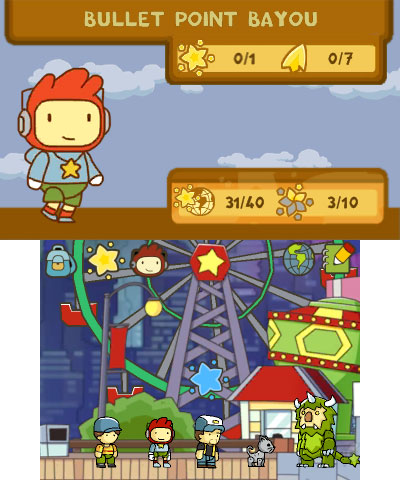 The 3DS hardware certainly puts some spring into Scribblenauts’ step, allowing the game to look better than any of its predecessors. It is unfortunate, however, that the game takes place only on the system’s bottom screen. Sure, the touch screen is optimal for placing the items you create, but tracing along the touch screen and watching the event occur on the top may also have worked. It's just unfortunate the game loses the real estate and stereoscopic 3D the top screen affords.

While Unlimited's focus may have moved toward usability, it's still a great game. It doesn’t bring wild and crazy innovation, but progress the series nonetheless. By streamlining its process, Unlimited gives players even better ways to lose themselves in a playground of their own creation.

Would I be missing out getting this on 3DS rather than Wii U? I'm having a hard time deciding which version I want...

Yes, you would. You don't get the editor or the online, I believe.

Also wii u version has Nintendo characters you can spawn ans play with . I really think 3ds version is totally bare bones in comparison , but its not worth $60 .

And the PC version is cheaper and superior to both.

And the PC version is cheaper and superior to both.

Hmmm, i wonder if Wii U version supports USB keyboard.

What, TJ? Have you played either game? Because I have. The only thing the PC version can't do is Off-TV play, which since I have a laptop, it techinically can. Plus, because it's not bogged down by Nintendo, it has pop culture icons that for some stupid reason the Wii U version doesn't have.

What, TJ? Have you played either game? Because I have. The only thing the PC version can't do is Off-TV play, which since I have a laptop, it techinically can. Plus, because it's not bogged down by Nintendo, it has pop culture icons that for some stupid reason the Wii U version doesn't have.

I've played both the Wii U and PC versions, and aside from the Nintendo cameos and multiplayer, they're identical as far as I can tell. Plus, it's signifcanly cheaper and gives you access to the Steam Workshop. Since I only own the PC version, that's the one I'm far more familiar with. I'm not sure about Oblivion's claim of extra pop culture icons as I don't have the Wii U version to compare it to, but I CAN confirm the PC version is definitely NOT inferior by any stretch of the imagination.

I love this game. You can be so creative and still answer most puzzles. My wife and I will sit there some nights, see a puzzle with an obvious answer, but instead try to think of the most absurd answer possible that should still work. And Scribblenauts Unlimited's answer system is built so well you can be creative.

Can you use the same 10 answers for a lot of problems? Maybe, but you can have a ton of fun if you use your imagination. Do that when you're playing the game, you'll enjoy it even more. 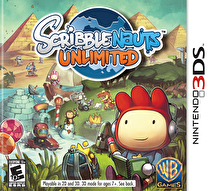