Not so slamacow after all.

Adventure Time: Hey Ice King! Why’d you steal our garbage?! is a serviceable product. It delivers a world fans of its source material will find faithful and enjoyable; that much is inarguable. Where it falters is its gameplay, an experience lacking anything as engaging. The game contains nothing that makes it exceptional, and instead coasts on familiar mechanics from long ago.

Leading up to its release, developer WayForward talked of Zelda II: The Adventure of Link’s influence on the game. A lot was made of the game’s map and mechanics, and how similar they were to those of Zelda II’s. Such talk always lights the fires of nostalgia, which Adventure Time certainly flames. In time, though, its Zelda II inspiration plays more like an act of convenience than homage. The game’s simplicity may have had a place in 1987, but we’ve since come a long way. In the shadow of its influences, the game has little of its own to say. 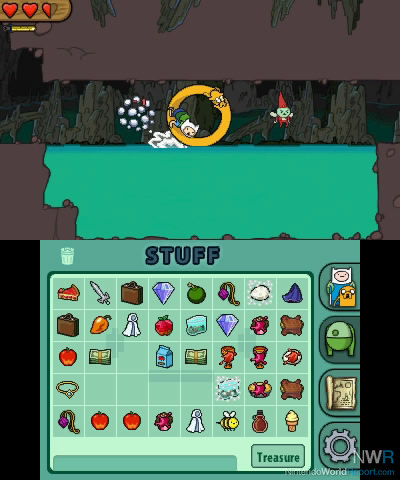 Adventure Time casts you as Finn (the human), with Jake (the dog) along for the ride in his backpack. The game’s overworld is the Land of Ooo, divided into five themed environments: Candy Kingdom, Grass Lands, Red Rock Pass, Ice Kingdom, and the Fire Kingdom. You traverse these surroundings from a bird’s-eye view, moving Finn and Jake to their destinations across an exaggerated map. As you scuttle about, black spirits appear. If you make contact with them, the game shifts to a side view and its combat system.

Fighting against Adventure Time's minions, whether in these random encounters or in the game's handful of dungeons, is a dull affair. Despite its adoration for Zelda II, Adventure Time doesn’t lift that game's experience system, which may have given some life to its dull combat. As Finn, players can wield a sword and cut through anything in the way. Jake provides some special attack assistance, but in most cases is never necessary. A lack of necessity is the combat’s biggest detractor; it becomes faster and easier to simply jump past adversaries. The one benefit from engagement is the items these baddies drop. Problem is, the management of your 40 item slots is completely up to you. You run out of room quickly, meaning there's no need to gather any more items. Any item management must also be done on the fly. You have no ability to pause and use items; you must quickly double tap the tiny squares in the inventory to use them. In the heat of a boss fight, this is less than ideal.

The game's bosses are the only enemies that block your progress and require engagement, and in most cases provide some much appreciated variance in their attacks (the majority of the game's scrubs stand in place or quickly pace back and forth, waiting for you to smite them). Unfortunately, the dungeons these bosses dwell within do not put forth the same effort. 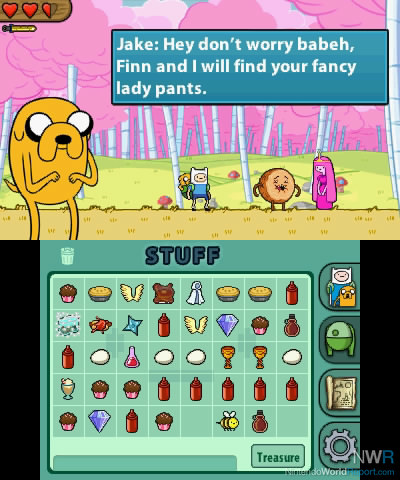 Level design in Adventure Time will leave you wanting, with simple navigation and not much in the way of puzzles. Much like the combat, there are no surprises, and not much going on to differentiate the dungeons from the game's other areas.

In spite of its name, there's also not a lot of adventure. The world's inhabitants see you as an errand boy, a perfect vessel they can abuse to solve their various problems. Those problems, of course, are always eased with some faraway item. Across the world map, indistinguishable staircases and cave entrances litter the land, each bringing you to a side-scrolling section, the ending of which leads to an item or your destination. As you progress in the game, it becomes difficult to discern which incredibly similar staircase leads to which dead end that you now have the means to bypass. The further you progress, the further back you have to travel. And when each environment feels so similar, it’s hard to make heads or tails of just where you should go next.

In presentation alone, Adventure Time earns high marks. The artists at WayForward have outdone themselves, drawing and animating a perfect recreation of the Adventure Time characters and environments. The music is top-notch as well, kicking off the game nicely with a remixed and extended cut of the show's theme song. The writing captures the spirit of the show, with dialogue befitting each character.

It's disappointing that while Adventure Time: Hey Ice King! Why'd you steal our garbage?! does its license justice, the mechanical side of things doesn’t translate as well. The game refuses to make a name for itself, instead relying on nostalgia to cover its mistakes.

Sadly, this review doesn't surprise. WayForward often make beautiful games that appeal to fans of the source material... but they rarely make games that are great when judged on gameplay alone.  I love WayForward and might buy this anyway because the writing sounds entertaining, but it's a shame that gameplay always seems to play second fiddle to presentation in their releases.


Edit: Fixed spelling and made minor clarifications. Tried not to change anything significant enough that the agreement comment below would be affected.

What @ejamer said.
(Except the "might buy this anyway" part.)

No mention of the second "higher difficulty" mode?  :Q  I wasn't overwhelmed by the game, but Wayforward, as usual, gave fans a quality licensed title... which is pretty friggin rare, wouldn't ya say?

No mention of the second "higher difficulty" mode?  :Q  I wasn't overwhelmed by the game, but Wayforward, as usual, gave fans a quality licensed title... which is pretty friggin rare, wouldn't ya say?

I didn't have any issues with the game's difficulty, and making things harder certainly doesnt fix what I feel is wrong with the game.

Their licensed work is often middling, it's their ground up creations that I enjoy the most. An average game is still average, no matter how well of serves its fans.

i tried out the demo and I thought it was exactly what this score represents. The graphics and sound are wonderful ( too bad its not fully voice acted) but the gameplay is not that interesting and frustrating. I died in the demo and when I retired the game made me restart the entire demo. I was instantly turned off, the demo didn't lead me and combat like mentioned in review is very basic and not to fun.

Sorry Adventure Time fans this game is a miss. This game has level design, combat and platforming so poor It reminded me that platformers could be bad games also. There are many flash games I have played of higher quality at random. It is a shame because I was looking forward to playing a game in the zelda II formula.

Not that I don't understand your criticism but this review is an outlier.  The rest have been positive.  The game isn't fantastic but it is basically just an easy Zelda 2 with great use of the property.  I personally had a blast with it.  I played through both difficulties & got everything.  I guess it depends on what you want out of it?

Not that I don't understand your criticism but this review is an outlier.  The rest have been positive.

Its missing 1ups which is positive.  Also 5.5 more than just "meh." 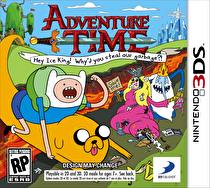