It's the ones you love who hurt you the most.

Part of the Guild 01 compilation published by Level 5 in Japan, Crimson Shroud was developed by the illustrious Yasumi Matsuno, of Final Fantasy Tactics and Ogre Battle fame. It is now being offered on the North American eShop as a bite-sized, standalone role-playing game. 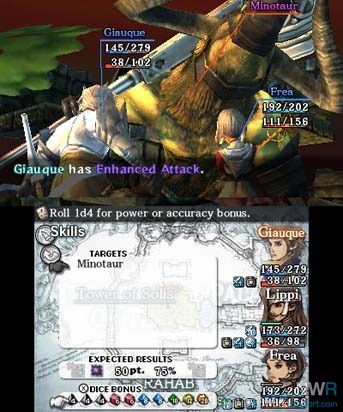 Going into it, all I knew about Crimson Shroud was its pedigree and the fact that its battles are dice-based. Having never really played either a Matsuno game or a tabletop RPG before, I naturally thought I was the best person to review it. Thankfully, despite having systems upon systems upon systems, the game really isn't as complex as the string of tutorials at the beginning would have you believe. I was overwhelmed at first but, after some practice and going over the in-game tips, the battles become second nature.

The dice actually do not come into play with every move. You choose your attacks, skills, or magic based on their potency or effect, just like you would any RPG. In some cases, such as attempts to debuff an enemy (slow him down, lower his attack or defense, etc.), rolling the dice is mandatory and determines if the spell succeeds or fails. In other cases, you gain a bonus die for chaining up attacks into a combo, and can then use your bonus dice collection to increase your odds of hitting the enemy and the damage your attack will cause. Every little bit helps, but in truth, using buffs to increase your accuracy or power will be a much more effective way to increase your chances. 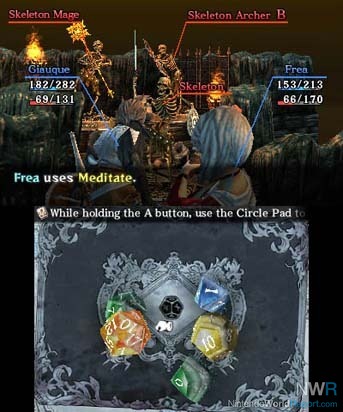 Battles in the game are not random. Instead, they occur each and every time you stop in specific rooms on the map, and so they can (in most cases) be bypassed after the first time you've fought them. Your characters don't gain levels, and their statistics don't change the more you battle. Instead, nearly every battle end with you choosing one new skill for each of the three characters in your party, and there is also a lot of loot to choose from. Each piece of loot has "burden points" attached to it, and depending on how well you did in battle, you can burden yourself with more of them. Some of the loot will be consumables such as health potions, while some will be gear, and that gear is what modifies your stats and gives your characters their spells.

Given that the same enemies inhabit the same rooms each and every time you land in them, you generally don't have to repeat battles beyond the first time you explore a room unless you want to, with one notable, tragic exception. In the second chapter, there is a darkened room that you cannot get past without a key item. This key item can only be obtained by killing monsters in a specific room, the Geyserm Waterway. This key item is a random loot drop... I spent at least two hours (out of ten hours total of playtime) going around in circles, fighting enemies again and again, reading the manual, checking the menus to see if I had missed something, some command, some spell I could use to light up that room. I had no way of knowing I had to keep fighting the skeletons of the Geyserm Waterway more than the five times I had already, until I took to twitter and got some guidance from a luckier reviewer and, with someone else in my predicament, figured out that the enemies had to be killed in a specific order (archers, then mages), for the item to ever show up.

This major design flaw is all the more infuriating because I actually enjoy the game. I love how concise it is. I love the feeling of playing an RPG through to the end in a mere few hours. I love the strategic feel of the battles and the genuine satisfaction of learning each enemy's weaknesses, allowing me to dispatch them in a couple of minutes instead of half an hour. I love the whole tabletop RPG gimmick, which doesn't stop at dice-rolling but gives you figurines as your characters, complete with their feet stuck on a base. I love little touches like the "tilt" mechanic, which seems to occur if you shake the dice too hard: one die escapes to the top screen, bonks a figurine on the head, and can be used later. I even got into the story, which is standard fantasy fare (a band of mercenaries, a Crimson McGuffin, the magic haves-and-have-nots, an ancient evil), but is well told despite a few typos. 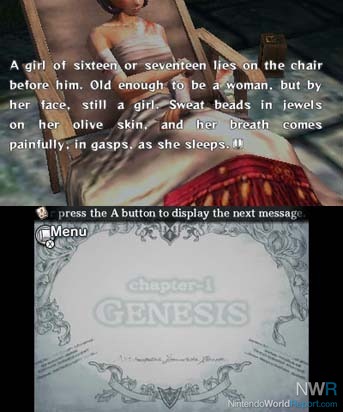 I resent the game for having to even think twice about giving it a high score. It should have been a slam-dunk for me, if not for a major, easily-avoided flaw. When all is said and done, however, once I got past that one frustrating point, I was just eager to keep playing and see what was next. Furthermore, you have been properly warned. FAQs will be written for the game. Players will not have to live my frustration. And I've already started a second run through the game. If that is not worthy of my highest recommendation, what is?

I am looking forward to this. I used to play some table top years ago and it would be nice to roll the (virtual) bones again. This review has settled it for me to buy, but I was curious about multiple play throughs. Can you play with the characters you used before with all their skills, loot and points, etc?

The eShop is full of quality niche titles. I'm lovin it and can't wait to get this game.

I am looking forward to this. I used to play some table top years ago and it would be nice to roll the (virtual) bones again. This review has settled it for me to buy, but I was curious about multiple play throughs. Can you play with the characters you used before with all their skills, loot and points, etc?

Yes, there is a "New Game Plus" option with harder enemies. The game is pretty short and, since I like it a lot, I jumped right into that.

It's a shame though that such an obvious oversight had the potential to sour people's opinion of the game.

This is the game I was most excited about in the Guild 01 collection. I'm very glad the digital age has given us the chance to play a game that would not have been localized otherwise.

Nice review Guillaume, it's raised my interest in Crimson Shroud quite a bit. I do like the sound of the table top theme. I'm playing Tactics Ogre for the PSP right now which is my first Matsuno game. I'm only on the second chapter and am finding it a bit too frustrating  and too 'system heavy' so far. So I'll see how I get on with the rest of that first.

It does sound good Guillaume, and thanks for pointing out that flaw in finding that item. That's a shame, because otherwise the games sounds very enjoyable!

Great review! Can't wait to check this out!

I checked this game out on the basis of this review, and I was thankful for the heads-up on the trouble in the Geyserm Waterway section.  Even with the advice provided in the review, it took a long while before I got the correct item drop.  It was a completely unnecessary and frustrating section of the game, but I agree that it's a great game, otherwise.

I figured out the waterway but now I'm stuck with a boss in the game...very frustrating.

This game is really awesome but also unfortunately obtuse at times.

2012, for me at least, was filled with obtuse game design. Between Fez, La Mulana and Sticker Star, I've about had my fill. I do plan on picking Crimson Shroud up at some point, but now is not the time.

I figured out the waterway but now I'm stuck with a boss in the game...very frustrating.

...aaaaaand I'm also stuck again.  This game would really benefit from even the most rudimentary of hint systems.

I've been playing for 9 hours and 30 minutes and most of that if not 5 surely 6 hours of that has been spent trying to get the drop from the Gerseym Waterway. I'm conflicted because I like the gameplay a lot, but I don't know if I can keep playing the same battle over and over again.


Edit: So of course after posting this I got the drop within an hour of playing. I'm finally glad I can move on with the game. If anyone is still on the fence about this game and specifically this issue I would still encourage them to buy the game because it's that good.

Great game so far. Just got passed the BS part. Luckily, I got the drop my very first try (once i looked up what to do online). But I can imagine some poor people out there getting screwed over and not getting the drop.

Not to mention, you are offered the option to skip that battle with a roll of the dice.

Absolutely enraging design flaw. I was so conflicted when it came time to give it a score!