Text is the most prominent factor in this sequel to Nine Hours, Nine Persons, Nine Doors (999); there's no shortage of it, and the text is captivatingly illuminated by other pieces of the game's presentation and methodical style. Through convincingly human dialogues, monologues, and asides, Zero Escape: Virtue’s Last Reward makes a strong case for an experience that values internalization and light participation above recognizable control and decision making. Text, and the characters and myriad situations it shapes and plays with, is the method used here to achieve this unique relationship. Virtue's Last Reward builds around writing that is confident at length, and very good. 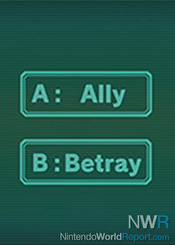 Like 999, Virtue's Last Reward concerns the mysterious kidnapping and gathering of nine individuals to play the Nonary Game, a devious machination operated by unseen forces, hinged on trust but laced with the temptation for betrayal and deadly consequences. As a twenty-something student named Sigma, you become acquainted with the other eight participants in the intricate and menacing game, and the coincidences of this particular group's identities break down. Through extensive scripted conversations, both one-on-one and in larger groups, the characters’ relationships, behaviors, and motivations come to light, and these details take the menacing situation into even darker places. The quality of the writing, and the meaningful personification and character dynamics it allows, create a well-paced tension throughout each story avenue. A few minutes' talk can swing the momentum of a story beat into unexpected territory, and Virtue's Last Reward is skilled at plunging its vague allusions and the overall confusion of the situation into horrifying clarity with impeccable timing.

To suit the manipulative nature of its situation, Virtue's Last Reward punctuates the flow of the text-driven story with an equally devious brand of puzzle rooms. Though they take place in distinct sectors of the game's enigmatic setting, make decent use of the system's stereoscopic 3D and touch screen, and can contribute to the series' overarching fiction, these "escape" segments often come off as distractions. The puzzles simulate the complexity and dread reflected in the narrative proper, but they also interrupt the game's superior realization of these qualities through text and story. Even with all manner of contrived situations and precise, empirical solutions, the puzzle rooms fall short in delivering the caliber of close, consequential involvement that makes the other sections succeed.

Industrial in its tone and setting, the game positions itself as unavoidably grim. That is not wholly inaccurate. Terrible tragedies and wrenching revelations come with any decision. But these occurrences, even as they twist the knife and the heading of the story, are another chance to further explore the plot. Choice, though required by the rules of the game and the narrative, is not the prime tool of Virtue's Last Reward. The resulting path for any decision is splayed out in detail, and VLR encourages experimentation in each divergence. The game may even decide for you, if the present timeline is linear. In this way, instances of choice become less an arbitrary, throwaway game mechanic, and more a fitting representation of the narrative threads that Virtue's Last Reward ties together so well.

Under the guise of a video game, Virtue's Last Reward unfolds an intricate story in which your participation is consistently worthwhile. In spite of the interruptions caused by its less engaging puzzle segments, this game stands out as an exceptional narrative experience unlike anything else on 3DS.

I'm 30 hours in and it's a great game. However, I feel all 3DS reviews of this game should mention the freezes/glitches whether you experience it or not. There is enough documented out there that it's an issue. I've experienced 2 in my play through so far and I've been careful not to save in the puzzle rooms because the freezes in those areas can corrupt your entire save file. There is also only one save file you can use. Everyone should know this.

If a reviewer doesn't experience a glitch, why should they mention what they have heard others say? The point of a review is to give their opinion of the game and their experience with it, not the opinions and experiences of others. Especially if it is not confirmed to be anything more than isolated.

If a reviewer doesn't experience a glitch, why should they mention what they have heard others say? The point of a review is to give their opinion of the game and their experience with it, not the opinions and experiences of others. Especially if it is not confirmed to be anything more than isolated.

When the glitch in question is a save-ending glitch that is apparently very reproduce-able, I think a bit of a public service announcement in a review warning potential buyers about it is very warranted. You can mention that you didn't run into it, but considering you could lose as much as 35 hours of play time to that glitch I definitely think it's worth mentioning.

There are enough topics of the glitches on the GameFaqs forums to indicate these are not isolated. I take it you haven't played this game. If the reviewer didn't experience any, great for them although it makes me wonder how much of the game they played. Like I said, I'm taking precautions not to save in known problem areas (the PEC room is a big one) and I've still had the game freeze twice on me. Luckily, I still had my save after resetting. Anyone interested should know this going in.

I try to avoid the GameFAQs forums because more often than not they are full of trolls. The last time I was active on one was the Animal Crossing: City Folk one so I could find people to trade with.

I played through every part of the game (ending at just shy of 30 hours), occasionally saved in puzzle rooms, and never experienced a glitch or freeze of any kind.

I had the freeze bug once. Lost an hour and a half. It does exist, but I had enough advance warning to know not to do something that might trigger the worst effects (read: save before every puzzle room).

I don't have a 3DS yet so I haven't gotten this game yet but it's at the top of my list once I get one.  999 was without a doubt my favorite game on the DS.  I agree that the review should at least mention the glitch, too many people on forums across the internet have reported the issue to consider it a few rare occurrences.