I ain't afraid of no rolley-coaster. I've been here all my life.

I'm a theme park nut. There's your regular type that likes to go on all the rides, and then there's me. I know all the intricacies and the entire history of EPCOT Center. I am also the kind of person the original Roller Coaster Tycoon sucked in, and had glued to the screen for hours at a time. When I found out a version was being released for the 3DS, I got pretty excited. In retrospect, I should have seen the writing on the wall. n-Space confirmed it was finished in February. It was supposed to be out in March. But it sat around until October with no explanation as to why. In the movie business, that's what they do with bad films.

If you're not familiar with the series, it's SimCity with a theme park. Build your park, give it a bunch of sweet rides, design custom roller coasters, and rake in the virtual cash. For the less creative, there's also a campaign mode that gives you challenges to complete within wholly or partially created parks. 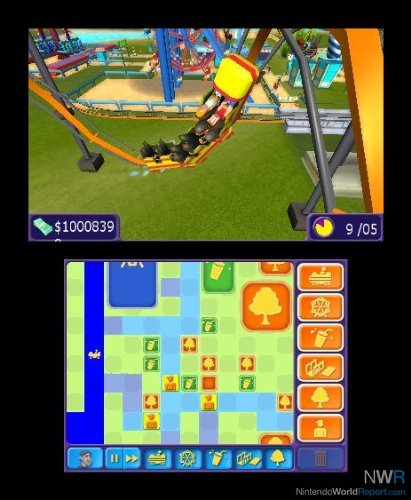 The core aspects of the series are still there, but one major missing feature is the ability to set prices for things like admission, rides, drinks, and even bathrooms. Pricing is automatic, which removes a big aspect of the game's strategy. Essentially, the economics have been reduced to managing your budget and hitting the occasional profit goal. But with no way to get in there and muck around with the books, and no real threat of losing money, these goals are shallow and are far too easy to complete.

I was quite excited for the touch screen controls, since they are one of the best ways to play simulation games. Unfortunately, RCT's implementation is sloppy. The game lets you draw routes for your paths, but it has a bad habit of missing turns as well as the start and end tiles of the pavement. The 3D camera is similarly frustrating. You can't zoom out nearly far enough, and at the maximum zoom setting (which lets you see a sixth of the park at most) the game cannot keep up with the graphical requirements and starts making entire attractions disappear to keep running. I spent about 10 minutes trying to place a merry-go-round in a location that looked perfectly suitable. For a while I thought the corner of my touch screen had died because when I pressed the build button, nothing happened. I started messing with the camera to see if I was missing something. When I zoomed in just one tiny step, a drink stand popped in from nowhere, right where I was trying to put my ride. Mystery solved. 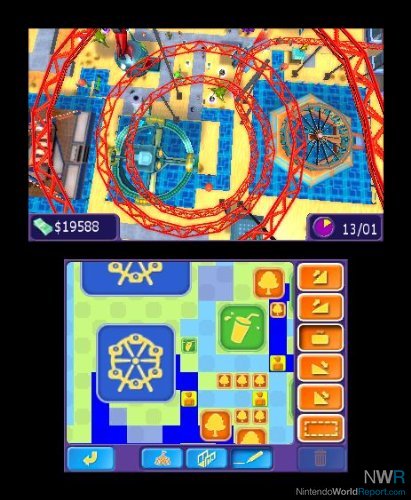 The campaign mode won't do anything to satisfy serious fans of the genre, as it is essentially a very comprehensive tutorial. It does, however, serve as a good introduction to the sandbox mode, which is exactly as advertised. You start with an empty slab of terrain and build your ultimate theme park. The parks look nice enough, and the 3D camera helps with planning (that is, when it isn't zoomed out too far). It's genuinely neat to see your self-made roller coasters in 3D, and watching from the train's camera is a fun gimmick as well. But even that wears off soon with all the game's flaws piled on top.

One especially glaring issue is the game’s lack of a way to save your progress mid-challenge in the campaign mode—you must complete the entire challenge in one go. Even more confusing is that the save function is present in the sandbox mode. All of this is especially infuriating when you know the game was delayed for half a year—time that apparently wasn’t used to fix its myriad of problems. 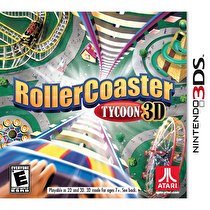