Do not dismiss 2 Fast 4 Gnomz based on the title alone: under its insufferable exterior, Gnomz hides some truly clever mechanics.

Much like WiiWare fan-favorite Bit.Trip Runner, Gnomz is an auto-scrolling runner in which your character always dashes to the right, but it also has a set of designed, finite levels unlike many infinite runner games.

Initially, you can only jump over incoming obstacles, but new abilities unlock as you start each new world of 10 level. Eventually, you press up to hover, down to ram through obstacles, forward to run even faster than normal, and back to rewind time (but only when you reach a clock in a level). 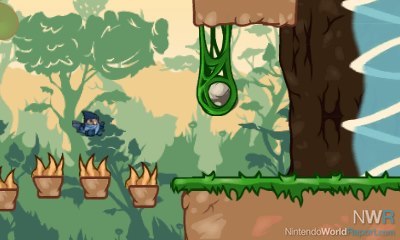 Only once you unlock the first three abilities, the game becomes truly fun. Each changes the arc of your jumps in different ways, giving you a lot more freedom of movement and allowing for improvisation. The time-rewinding mechanic, though used only in the last world, injects an element of exploration I thought incompatible with the genre. Impressive!

Gnomz often crosses the line between challenging and frustrating. Unlike in Runner, Gnomz has no rhythm to its platforming, which makes memorizing levels difficult. The game’s scrolling speed makes memorization your only hope to finish levels, let alone perfect them. Various obstacles also don't stand out enough from the backgrounds, which may cause you to die unfairly until you remember where they are. Don't even think of turning on the 3D for this game.

You earn stars at the end of each level, and the game grades you on the number of socks you have collected, the number of times you have died, and, once the running ability is unlocked, the time it took to finish the level. Earn enough stars, and you unlock the aptly named Nightmare levels.

The game falters a bit with this grading system. In normal play, you restart automatically and instantly from the last checkpoint. But when going for a no-death run, you have to press start and choose to restart, a three-step operation that, combined with a delayed response, makes the whole process irritating. 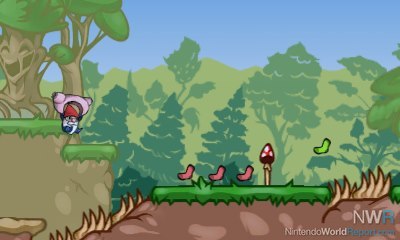 It took me some time to warm up to 2 Fast 4 Gnomz, but when I revisited past levels with all the character's abilities, it clicked: mastering how each affects your character while in the air is key. You get more freedom than usual in the way you tackle each jump. This does not, however, excuse the unfairness of obstacles that are impossible to see.

The game takes a little time to get going, and some of the irritations never quite go away, but once you have a full arsenal of moves and an idea of where problematic obstacles are, 2 Fast 4 Gnomz can be a fun and challenging (and occasionally frustrating) experience.

Do you have something against Gnomes?  You should watch Gnomeo and Juliet.

I played a little ways into this and so far I'm really liking this. My only complaint is the lack of a quick restart button, which Gui touched on in the review. It's not like there aren't any free buttons they could have used.