Professor Layton and the Miracle Mask

A fine puzzle for a gentleman.

Gorgeous art style, interesting characters, and a tightly wound story are important qualities of the Professor Layton games, and the series may not have nearly the following it does without the romanticized, period-piece charm that supports its gameplay. However, these qualities are also a means to an end, and that end is puzzles. All roads of plot in Layton’s 3DS debut, Professor Layton and the Miracle Mask, lead back to these myriad brain exercises, and without a deep supply of interesting and complex puzzle experiences, the games would have no support for the narrative lengths to which they reach.

This important puzzling slice of a Layton game is a known quantity. It's enough to say that the puzzles in the latest are wily, always interesting, and well paced, which is about as much as they could hope to be in the brief instances you mess with each. No puzzle (with the exception of those saved for the finale) needs to burn the world down, in difficulty or in payoff. It's better that puzzle experiences be consistently interesting, challenging, and rewarding on a small scale. As with its predecessors, Miracle Mask seems to adhere to this policy, using dozens upon dozens of these devious activities to support its other, mostly interesting ventures. 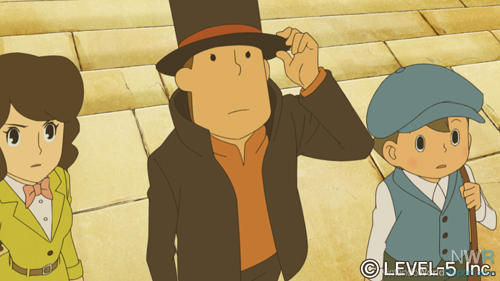 Miracle Mask's story concerns the disruptive and increasingly ominous magical acts of a character known the Masked Gentleman in the desert city of Monte d'Or - a situation an old high school acquaintance calls Layton in to clear up. More familiar faces show up over the course of the investigation, many from this particular period in Layton's past. In addition to the dark elegance and various activities of the present day situation, the game devotes several flashback chapters to more clearly defining the repercussions of dramatic events involving Layton and his closest friends, while also roping in some interesting puzzle variants.

While these chapters begin with Layton and co. solving puzzles of standard stock in school and village environments, story turns conspire to draw Layton and his best friend, Randall, into the ruins of an ancient civilization. Here, the game shifts into a different, temporary play style: instead of wrestling with puzzles in a static environment, you gain physical control over Layton. With this direct interaction, the game has you maneuvering the character through and interacting with 3D puzzles, which involve careful management of your own space and that of other objects. This change of pace succeeds as a tactic to match the tone of the situation, i.e., the flashback's emphasis on the teamwork and deep relationship between the young, conservative Layton and the enthusiastic Randall. These well-paced chapters provide a strong backstory that runs in parallel with the present day events, and add definition to the identities and motivations of the characters involved. 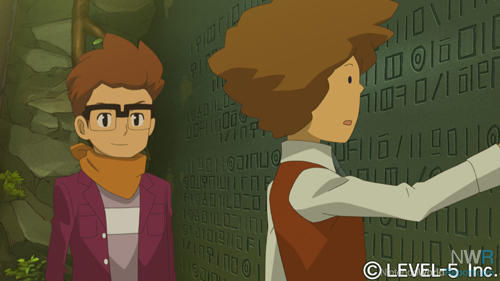 Miracle Mask takes aggressive advantage of the series’ first outing on the 3DS. While elements of the inviting 2D animation aesthetic remain in the game's numerous locales, Miracle Mask bolsters the structure and personality of Monte d'Or and its residents through the system's capabilities. Character models look superb in both polygonal and stereoscopic 3D as they converse and sort out situations among themselves on the top screen with natural expressiveness and gesticulation. While Miracle Mask includes the series' trademark animated cut scenes, it also often defers to presenting short, nicely framed cinematic moments using the polygonal characters.

Moving through Monte d'Or along the different points of the 2D overhead map creates a microscope-like effect as you delve deeper into the city's structure, peeling back layers and probing the unique areas within. Using the touch screen to look around each distinctive area for puzzles, hint coins, and other items on the top screen imparts a feeling of actually looking, in that, from your position as a person on the street, you can't take in everything from a fixed perspective. The game lets you move your gaze all about, which often exposes the different angles and layers of the inspected section in a neat way.

Miracle Mask throws in several unconnected extra modes, sections of which unlock as you progress the story or find them in the wild. Some, like the mini-game that has you guiding a small robot around 3D puzzles or the shop mini-game in which you strategically stock related items to manipulate each customer's interest, have interesting hooks that reward in the short term. The others, a Nintendogs-like rabbit training activity and a poorly controlling horse-racing event, feel less complete, and lack the sense of purpose and challenge that make the others worth messing with.

If you equate a new Layton release to the promise of fresh puzzles, Miracle Mask should fulfill that desire handily, with a year's worth of downloadable daily puzzles coming on top of those already available. However, the game also takes notable advantage of its new handheld home, using a number of narrative and aesthetic devices to weave its refined style of gameplay and emotional, spiraling story into a tight experience that rewards on all accounts.

What's the file size for the eshop version?  ... If you know.

I haven't played a Layton game since the first one, which I never finished, but I've been thinking about giving the series another try, and I'm also a big proponent of buying retail games on the eShop, so this also appeals to me in that way. My question is, would I be completely lost if I jumped back in here? I understand that I'd be better off going back and playing all of them, but I don't really have the interest to do that.

What's the file size for the eshop version?  ... If you know.

Our review copy is retail. It should be launching in Europe tomorrow, so keep an eye out for reports from there.

Insanolord:  I don't think you'd be lost.  Each of the Layton games is fairly self-contained.  There are recurring characters at times, but they aren't really integral to the story or theme of the game.

There are usually a handful of references to earlier games in the series, and this particular game is a sequel to the 4th game as well as the second one chronologically. Still, you shouldn't be completely lost, but I'd encourage you to play through the others in the series too if you enjoy this one - preferably in order.

I have every game in the Professor Layton series. I have played every game completed every game, and if it wasnt 100% at the completion would redo the game. This is the ONLY game that I will spend time playing. And I am upset that it is only being released on Nintento 3D. I will not buy an entire new gaming system for one game. Some of us do not feel the purchase of an entire new system is worth it for one game, I also do not feel that the N3D is as great as people try to make it out to be.

@Kim, you're just being silly. It's a 3DS exclusive just like the others were DS exclusive. You might as well have complained about having to buy a DS for those Layton games.

There will be more Layton games for the 3DS in the future such as Layton 6 (Ruins of an Advanced Civilization or something like that) and Layton vs Ace Attorney, as well as many many other games worth playing. If you don't want to buy the system, you won't be able to play any of those games and there's no sense complaining about it because it's your choice. 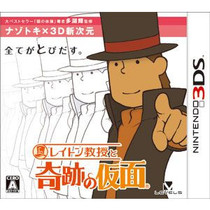