In the same puzzle, Mario and Sonic were answers. That's called synergy.

Crosswords Plus, the 3DS follow-up to 2008’s Crosswords DS, offers nearly everything the original did in a similar package. You have a variety of crosswords puzzles, ranging from the Easy difficulty to the Very Hard difficulty, as well as several additional word games that make Crosswords Plus a cohesive experience with good gameplay variety. Yes, you’re always doing things with words, but the other modes, such as Anagrams and Word Search, provide welcome distractions from the fun, crossword puzzle-heavy affair. 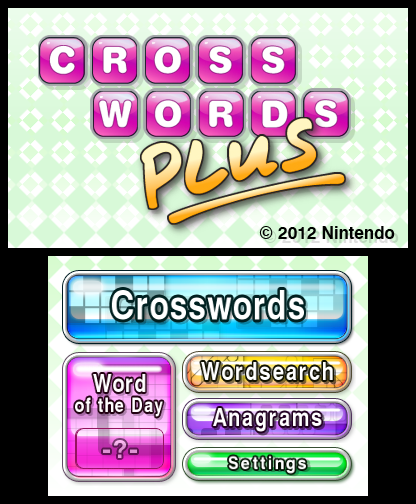 Crosswords Plus adds a few new modes as well. Word of the Day lets players learn some silly trivia while completing Word Paths that link words together by one or more letters. The game uses StreetPass and SpotPass to unlock bonus puzzles, which it downloads daily and shares at random with anyone you StreetPass. It’s a silly way to lock content, but it succeeds in furthering the way Nintendo seems to want this game played: a little bit every day.

As far as I can tell, you unlock content just by playing. I played the game for a few hours and unlocked Hard difficulty; on my second day, I unlocked Word Search. This is a Brain Age-like carrot at the end of the stick, and makes Crosswords Plus a great game to have on your 3DS. You can go in, clear a few puzzles, and see what new things await you.

Having to deal with easier difficulties at the start may frustrate experienced players, but the difficulty curve is not what I expected. The size of puzzles stays roughly the same in each difficulty. The difficulty comes from the increasing cleverness of the hints, not so much the size of the grid. Even as a mildly experienced crossword player, I enjoyed most of the Easy difficulty puzzles I played. 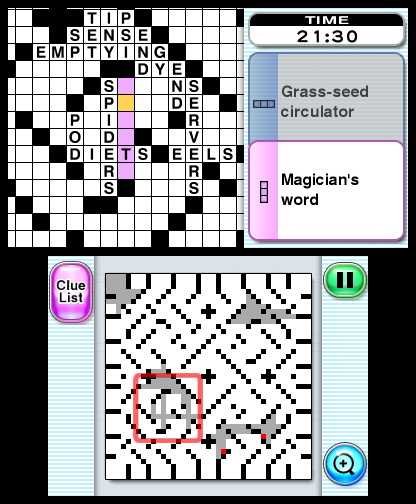 Easy puzzles also give players an opportunity to learn the sometimes-annoying letter recognition system. I cursed the game at first, as it couldn’t read my O’s, E’s, or K’s. I realized my handwriting is pretty atrocious, and noticed tricks that helped me write letters with better accuracy. Making my O’s by drawing a circle that looped around another quarter of the letter and always drawing lowercase E’s eased my frustration and made the experience better. By the time I worked my way into the harder difficulties, I wasn’t having any issue with letter recognition, leaving the challenge to the puzzle elements and not the game’s input method.

Crosswords Plus hides a ton of content, totaling at least several dozen hours. It is a well-made game with a decent amount of variety and a nice feedback loop. If Layton games don’t offer enough word puzzles for your liking, then maybe you should cross some words, solve some word searches, and lay out some anagrams on your 3DS.

It's a shame this one is just like the first one.  I'll stick with actual crosswords :/  Forcing me to play through easy, and tiny crosswords is no fun.

I'm interested in the game, and think it's an excellent candidate for digital download... but can't keep from balking over the price. Sure, there may be enough content to justify the price tag - but the content just doesn't appeal to me enough to invest that money when I could get a "real" game instead. As a very casual fan of word games, $30 is simply more than I'm willing to pay for crosswords, even with some nice in-game extras and a "free" download of Donkey Kong.

Here's hoping for a (significant) sale at some point.

Clue - To price excessively; To set too high a price on. 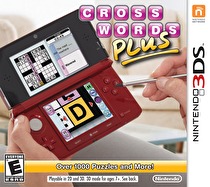