These birds are very angry. I am surprisingly not.

Have you ever heard of Angry Birds? If you answered no, I’m not sure where you have been for the past few years. Angry Birds has become the quintessential iOS/Android game because of its quick and fun gameplay. The series has had many iterations over the years and while they are not that different from each other, people keep coming back for more. Angry Birds Trilogy takes three of these iterations (Angry Birds, Angry Birds Seasons, and Angry Birds Rio) and combines them into one 3DS package.

You can freely select between any of the games, all of which are essentially the same. The only major difference is the objects included in the playfield, which don’t really have an effect on gameplay. I would have preferred to see a different style Angry Birds game, like the more recent Angry Birds Space, in the place of one game and two reskins. Repetitive ideas aside, what is included on the card is in great bounty. Each game features hundreds of individual levels that can be digested in small or large intervals. As a handheld game, the pick-up-and-play nature of Angry Birds Trilogy is very appealing. The game can also be played on the go for free on other mobile devices, as long as you are cool with ads.

The gameplay of Angry Birds Trilogy doesn’t offer much variety to those looking for an in-depth experience, though. Using either the touch screen or Circle Pad (touch screen controls are vastly preferred) you pull back a slingshot and launch an “Angry Bird” at a tower of blocks in order to destroy the enemy pigs (or to free caged birds in Angry Birds Rio). There are multiple styles of birds that affect the strategy you use when you take down structures to get to the baddies within. However, most of the time I found myself not caring about strategy and just flinging the birds and adjusting my play style to achieve success on the fly, ultimately reducing the game’s depth even further.

The game does feature some other content to appease those hungry for either high scores or achievements. High scores in a game such as Angry Birds feel shallow, because of the lack of interaction you do with the game. In each level you generally make two or three gestures and the rest is left up to the in-game physics. Achievements, like high scores, are not a great way to add replay value to a game like this, but for those that like them, achieve away.

In addition to these minor features, Angry Birds Trilogy offers unlockable levels and Mighty Eagle challenges. Completing specific tasks award you with a golden egg, unlocking additional content. However, unlike achievements, you are unable to view what task unlocks this award. As for the Mighty Eagle, it becomes available after you complete a level. Upon replaying that level, you can use the Mighty Eagle in an attempt to destroy everything on the screen. Every few levels I found myself trying to completely annihilate a level, but to achieve 100% destruction was quite difficult. A StreetPass function is also available that allows you to “migrate” a bird to another 3DS and transfer a short bird song you record. I didn't get to StreetPass with anyone, but I do currently have a bird out migrating.

The 3D effect on the game is serviceable, and not anything to highly praise. With the camera generally zoomed out to fit both the slingshot and the structure in frame, much of the picture is hard to view, even on the 3DS XL. It also doesn’t help that the slingshot is controlled on the lower screen so looking back and forth is rather distracting.

Angry Birds Trilogy is only a decent port of a game that has become a well known commodity. While this version of Angry Birds is virtually unchanged from its free iOS/Android equivalents, if you are a huge fan of Angry Birds, a 3DS rendition may be just what you want. The game is packed with content, and will leave you with plenty to do for many hours.

LOL! This should of been an eShop title. I know Angry Birds is popular and all, but I think people like it because of how cheap the game is (price wise, not content wise). With a fanbase that is used to paying no more then 4 bucks for each game in the series, 30-40 bucks seems like a huge asking price to have it on a system they probably don't have. If they do have a 3DS, they most likey have a smart phone with Angry Birds on it already, which they hardly ever play to begin with (that is my case anyways). However, if this where say a $10 eShop game, I think more people would be willing to fork over the cash for it, espically since these games have already been on iOS and some browers for quite some time now.

I mean, it's already bad enough the ports are just ok and the 3D isn't done very well, but even if they where super good with awesome 3D and had an amazing street pass feature or something that made it worth getting, I feel the asking price is still to much.


I can't imagine it doing well at that price.


If it does... well then people will buy anything.

A sucker is born every minute, and I'm guessing this game still won't sell.

Rovio is trying the bigger markets now. Seeing if Angry Bird itself is big enough to succeed in console space. Smart move. If this is successful im sure they will focus on handhelds more. (of course mobile always being first) Let us all watch and see what angry bird 3ds can do.

These games are a dollars' worth of fun. They are not thirty dollars' worth. I went through Angry Birds once. I have no interest in going back.

I bet this game sells gangbusters.
Not that it should.
But I bet it does.
At least the 3DS is *only* 30 bucks and portable. Who would buy the 360/PS3 versions for 10 bucks more and stuck on the couch? 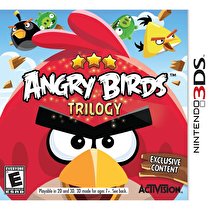