A hard game for a soft generation.

Officially announced for release in 2009 and later dropped by its North American publisher before finally securing a release nearly three years later, it’s a wonder La-Mulana ever made it to the West in the first place. However, the difficulty the game experienced in its localization is parallel to the difficulty I had playing it. To put it simply, La-Mulana is hard. 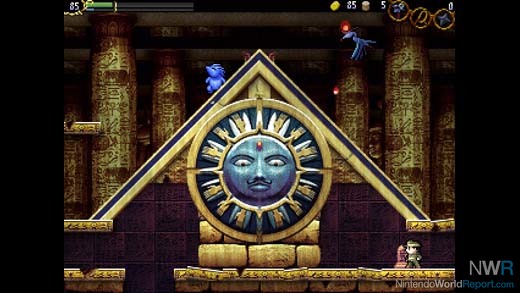 A remake of a popular retro-inspired PC title, in La-Mulana you play as Lemeza Kosugi, an archaeologist and descendant of ninjas. The game’s story is similarly bizarre, opening with a folk ballad describing the birth and destruction of mankind. Nevertheless, the story appears mostly in the form of stone tablets scattered throughout the world, and acts as little more than a backdrop for what’s really important: the gameplay.

La-Mulana plays similarly to Castlevania, in that main character is equipped with a whip and gains sub-weapons along his journey. Like the Castlevania titles that followed Symphony of the Night, the game also takes places largely in one area, which you gain greater access to as you find items and complete puzzles.

Setting the game apart is its punishing difficulty. It’s easily one of the most difficult games to come out on the market in quite some time. To give an example: I spent three hours playing the game one evening, only to collect an area map. Most of my time was spent dying and returning to the last save point. The difficulty isn’t always the product of quality game design, either. Oftentimes, enemy placement and movement patterns simply feel cheap, and the lack of healing items mean you have to be especially careful. Not to mention that grinding for money is a huge part of collecting better items early on in the game. This wouldn’t be a huge problem if it wasn’t for the fact that you lose all progress since your last save when you die. 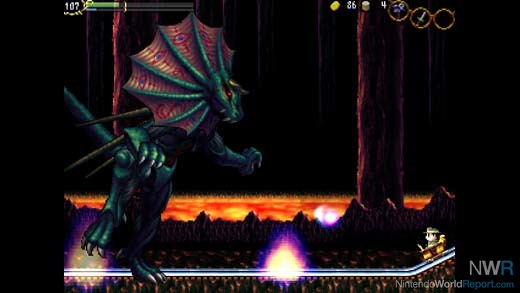 However, with the excessive difficulty aside, La-Mulana is anything but a bad game. The game shines when it comes to its boss battles, enemy and item variety, aesthetic, and music. But experiencing all the game has to offer requires determination. La-Mulana is not a game for those without lots of time and patience.

That was an incredibly short review.

Kind of confirms what I feared: It's cool, but it's just too damn hard.

I -LOVE- this game. it is CRAZY good. it was crazy good in it's original form where the only place to save was in Elder Xelpud's tent on the surface. Yes, Nigoro did design this game with a sort of Comical sadism developed form years and years and years of playing games like Knightmare 2: The Maze of Galleous and the MSX version of Castlevania.

Yes, this is a tough one to review because as Johnny Metts said on Radio Free Nintendo this past sunday that you kinda gotta get a grasp on some of the basic things this game wants yolu to do before you really dig into the meat of the game's 18 areas, filled with all sorts of just... crazy puzzles that show a very sharp attention to detail in the way unto which they are created.

I REALLY do highly recommend  this one, but I also HIGHLY recommend if you're going to take on this game that you locate the La Mulana Wiki to start telling you some of the real ins and outs of this one. First playthroughs generally tend to run around the 15 hour marker and then there's just... a LOT of replay value in that there's a TON of flexibility on how you can tackle La Mulana, which isn't something you often see in Metroidvania.

I just beat my fourth boss (Ellmac). After what was probably my 20th attempt I came to the conclusion that I wasn't going to be able to beat him without another few Sacred Orbs to boost my health. It wasn't pretty, but it got the job done.

Compared to the other three bosses I had faced, the Ellmac battle felt like it was less dependent upon skill. The others felt more tactical. They were hard, but there was quite clearly a method or pattern to decipher. Once you knew what you were doing it was simply a case of executing upon it. The Ellmac battle, however, felt more like a question of my health lasting longer than his. Not very satisfying. I've loved all the other boss battles though. They've been refreshingly simple but unforgiving.

Another biiiig help with elmac is to come in with a full stock of Shuriken and just figure out the rythm to his attacks. another item that helps is the... ugh, I still don't know how you do the spoiler text thing that you do, Pixelated Pixel. ;_; otherwise I'd gladly share my strategy with you!

Another thing that this remake does that's interesting is that if the bosses are indeed giving you too much guff, there is a Pistol you can buy at the very beginning of the game that is stupidly powerful. one bullet is about the equivalent of hitting something with about 15 shuriken or 7 hits of the leather whip. the thing about the gun is though that the ammo is stupidly expensive. 400 coins for 1 magazine in the beginning! X_X;;

How to do spoiler text:
Text Here


Just remove the extra spaces inside the square brackets.


here is an example

the thing about the gun is though that the ammo is stupidly expensive. 400 coins for 1 magazine in the beginning! X_X;;


That was what put me off ever going near the pistol. As it is I'm having to grind for coins in order to purchase more important things (software and laptop upgrades), so I don't like the idea of spending that much money, and by extension time grinding, on ammunition. It's good to know that I have a plan B though in case I need it.

Silver Shield in the Graveyard of the Giants is what I was referring to in the last post to help with Ellmac. also, if you've gotten the Isis Pendant , there's a pretty awesome way to cap out your money in about 2 minutes. Also, when you do buy the pistol for the first time, it comes with a magazine in it a,lready, so that's a bit of a saving grace.

I actually did a speed run of this version of La Mulana this morning, got my 100% speed run down to about 6 hours now. which is really a testament to how beefy the game is even if you do know what you're doing and know the solutions to puzzles before you could possibly know them fairly. they really do jam in hints to all the puzzles, even if they're small things like a mural depicting an Ankh on a wall and a skeleton who mentions that he died by tripping and falling off an invsible bridge that he's laying under. ... yeah, immediatley after you buy the hand scanner, Xelpud does inform you that some of the skeletons have messages if you use the Hand Scanner on them!

Silver Shield in the Graveyard of the Giants is what I was referring to in the last post to help with Ellmac. also, if you've gotten the Isis Pendant , there's a pretty awesome way to cap out your money in about 2 minutes.


I haven't yet worked out how to open the doors with large eyes on them (don't tell me) so I don't believe I can yet access the graveyard of giants. From what I understand the silver shield halves the amount of damage you take, which sounds incredibly useful. I'll have to look into it.

I do have the Isis Pendent and I've brought it to the relevant person. Soon after I  saw a patch of light and for a few minutes a fairy followed me about, but it didn't seem to do anything .

They really do jam in hints to all the puzzles, even if they're small things like a mural depicting an Ankh on a wall and a skeleton who mentions that he died by tripping and falling off an invsible bridge that he's laying under. ... yeah, immediatley after you buy the hand scanner, Xelpud does inform you that some of the skeletons have messages if you use the Hand Scanner on them!


I saw that message about him falling to his death but I didn't see any mention of an invisible bridge , lol. Personally, I think having something like that upfront, right at the beginning of the game, is likely to turn many people off. When I finally gave in and watched a video guide of it being done I was about ready to turn the game off and never play it again. I'm glad I didn't, but it was still a real dirty trick.

At the moment though I'm making progress, so I'm enjoying it (until I hit another brick wall at which point I'll probably hate it again).

EDIT - To glance at the above you'd think I was discussing government secrets rather than a video game.

Silver Shield actually blocks projectiles. there IS a different item that works for halving damage.

Faeries come in 4 different varieties, and thier spawn points have a 3 minute cool-off after you have summoned one.

Pink Faeries gradually heal you as you go around, which as you can imagine is incredibly handy if you don't want to interrupt exploration with a hot springs trip

Blue Faeries are Weapon Faeries, and will use the sub weapon you have equipped without using ammo. as useful as this sounds, these are probably the worst because you will be punished for any objects they hit that trigger the eye of divine retribution.

Green Faeries are Luck Faeries, which make enemies and destructable objects just GUSH coins. there's a room in chamber of extinction with boxes that respawn every time you go off screen and are right by the edge of the screen, and then the game will suddenly become La Moolahna!

Yellow Faeries is used to open up super secrets... This can actually lead you to finding some of the most powerful programs in the game or even allows for a rather large sequence break where you can get to an area that's VERY late in the game FAR earlier.

Why am I telling you about the animations they use to spawn? well, quite simply, if you toucha  fairy spot and then go off screenb efore the fairy actually appears, it wont' spawn the fairy and it'll instantly recharge the fairy spot. this will let you abuse the RNG instead of having to wait until much later in teh game where you get the software that allows for controlled Fairy spawning.


As for trying to venture fourth into the Backside areas , you actually have a few options available to you to get back there if you'd like me to detail some of them for you if you really do get stumped, I'd be glad to do that.

Great stuff. That info is very useful. If I have any further problems Ill be sure to pick your brain. Thanks man.