The best of all possible realities.

Just what shape Fractured Soul would've taken had the game not experienced the number of setbacks it did on its way from the DS to the 3DS, and from retail to the eShop, is hard to determine. Given its ultimate platform and price point, it might be too easy to misclassify the screen-jumping platformer's present state as a compromise of Endgame's initial vision for the game. Regardless of any original intentions, though, this final incarnation of Fractured Soul unites smart ideas and a sharp execution around its very specific mechanic. 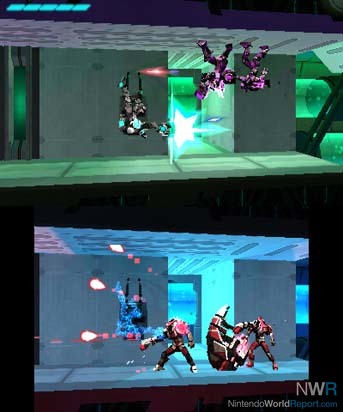 Fractured Soul's concept, condensed: By hitting a button, you swap your character between two different realities (represented on the top and bottom screens) that, while similar in their broad architecture, present different platforming layouts. Early on, you move through rudimentary designs, using the switching ability to circumvent barriers, dodge enemy fire and placement, and navigate jumping puzzles (the pieces of which are scattered between the realities). At this point, the realities mirror each other closely not just in shape, but also in physical properties, and the low-consequence play results in a learned inclination to move your eyes in tandem with the shifting of your character from screen to screen.

The predominant strategy in Fractured Soul doesn't concern precise platforming (the character, while relatively mobile and equipped with a double jump ability, lacks some of the accuracy of other games in the genre), but instead this capacity to effectively bounce back and forth between screens. Instead of relying on the character's jump ability to avoid enemy fire, you quickly slam back and forth between realities, allowing attacks to pass through your position and getting in shots when you once again share the same plane. 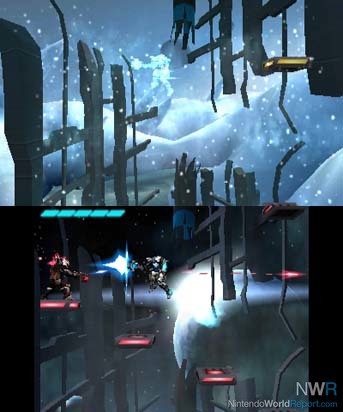 While this tactic works a good percentage of the time, dodging combat altogether seems the ideal way to play. Doing so by way of the switching ability is not only often faster (the game tracks your time for each stage), it also leads to fewer hits. Given the shallow pool of life you have at any given time, this method feels far more parallel Fractured Soul's gameplay conceits. Emphasizing smart play with the switching technique over a rote jump-and-shoot design isn't always the game's solution, though. Often, the sole way to proceed involves dispatching enemies with your own paltry shots. Using the character's ability to shoot in service of solving puzzles (which is often the case) is fine; using shooting to clear a hallway or shaft of enemies feels obtuse, and highly disruptive to one of Fractured Soul's best qualities: its pace.

Instead of the Mega Man-esque platforming-and-shooting experience it leans on to poor effect, Fractured Soul seems better suited to a Mirror's Edge gameplay philosophy: smart, active avoidance with an interesting system, without the run-and-gun gameplay grafted on. Dealing with enemies by switching around and outsmarting them is far more satisfying than relying on the character's ineffective bursts, but Fractured Soul increasingly relies on such mechanics as you progress, which lead to unavoidable (and seemingly uneven) firefights and frustrations in later stages, and act as a deterrent to the game's consistently engrossing platforming. When you're just standing (or moving around slightly) and shooting something—even if you do well and don't lose life—it's never as fun as the game's physical problem solving; you're not applying any of its interesting or learned skills. 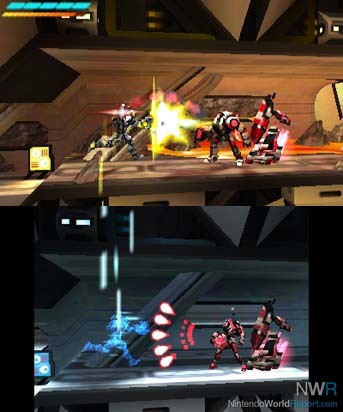 Fractured Soul is at its best when it doesn't try to be Mega Man, and just shows confidence in the plasticity of in its lead mechanic. Successful and seamless use of the switching ability is possible, and highly rewarding, but requires a certain mindfulness of the position of your corporeal (and vulnerable) self, the obstacles present and coming up on each screen, and the timing necessary to slip by in the reality. At a point, the game introduces harsher differences between the realities. The top one may be underwater (and thus have different jumping physics), have violent winds that blow you around during jumps, or feature columns of air that keep you aloft. The variations emphasize different kinds of awareness in the game, such as shifts in motion, time spent in each reality, and the existence of platforms in each area. With these tricky alterations, Fractured Soul tasks you with balancing an even more complex workload, keeping two sets of rules on hand to make it through its rigorous and often tightly structured puzzles. Failure happens frequently (often with a helpful checkpoint), but success comes with a deep satisfaction from the physical memorization and application of something so difficult but so cool.

Apart from a fairly lengthy collection of main stages, Fractured Soul features several bonus scenarios (unlocked by attaining better rankings in the main stages). It also breaks up sequences of platforming with a handful of side-scrolling shooter stages. Decent, if inconsequential, these short segments are a safely superfluous distraction from the main gameplay, though they employ the switching mechanic to suitable effect.

Fractured Soul is a superb and fairly extensive collection of clever, interesting, and devious platforming ideas; most of it is good, much of it is fantastic. Some of it sullied by disruptive limitations and antithetical gameplay choices, though this slice is minimal compared to the abundance of well-structured—and decidedly fun—moments Fractured Soul delivers.

Whoo-whee, that was a $25 dollar review, yessiree.
just look at that concluding sentence:
"Some of it sullied by disruptive limitations and antithetical gameplay choices, though this slice is minimal compared to the abundance of well-structured—and decidedly fun—moments Fractured Soul delivers."
A hum-dinger, I tells ya.
Thanks. 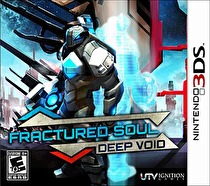