Sora and Riku are back with new and familiar faces.

As a huge fan of the Kingdom Hearts series, Kingdom Hearts 3D: Dream Drop Distance was my most anticipated game on the 3DS. Fortunately, the title doesn’t fall short of my high expectations. Despite some minor shortcomings, I believe everybody will find something to love about the newest entry in the series.

Those who have played a Kingdom Hearts game before are likely well aware of the complex story told throughout the series, a trend Dream Drop Distance continues. Kingdom Hearts 3D drops you into the world with little information as to the present circumstance, using flashbacks to illustrate the premise of the game. While I found this an interesting idea, I disliked the fact that I still couldn’t tell what was really going on until a few hours in. Kingdom Hearts 3D also includes journals that retell the stories of the previous games, a nice addition for those (like me) who have not played any of the games in quite some time or aren’t up to speed on any past events. 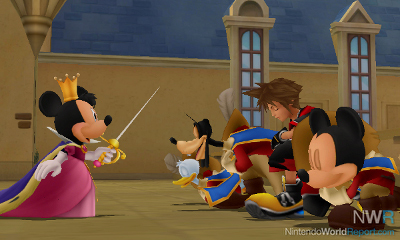 Kingdom Hearts 3D’s gameplay is split between its two main protagonists, Sora and Riku. When you play as one of the heroes, the other is temporarily kept on the sidelines. The game forces you to switch back and forth between the characters based on a timer that continuously ticks down. While an interesting mechanic, it’s sometimes a pain to deal with when you are in the middle of a battle. The two characters also have separate stories. Both journey through the same worlds, though they traverse different locations and meet different characters. I appreciated the multiple scenarios in each world, but I did feel the story for each character was a bit underwhelming. Upon entering each world, you’re immediately faced with the problem and tasked with finding a solution, a method of storytelling each location seemed to rinse and repeat. These story issues are the game’s most glaring faults. The Disney worlds to which I traveled, though, while fewer in number than Kingdom Hearts II, were original and loveable places to visit, and rendered beautifully by the 3DS. 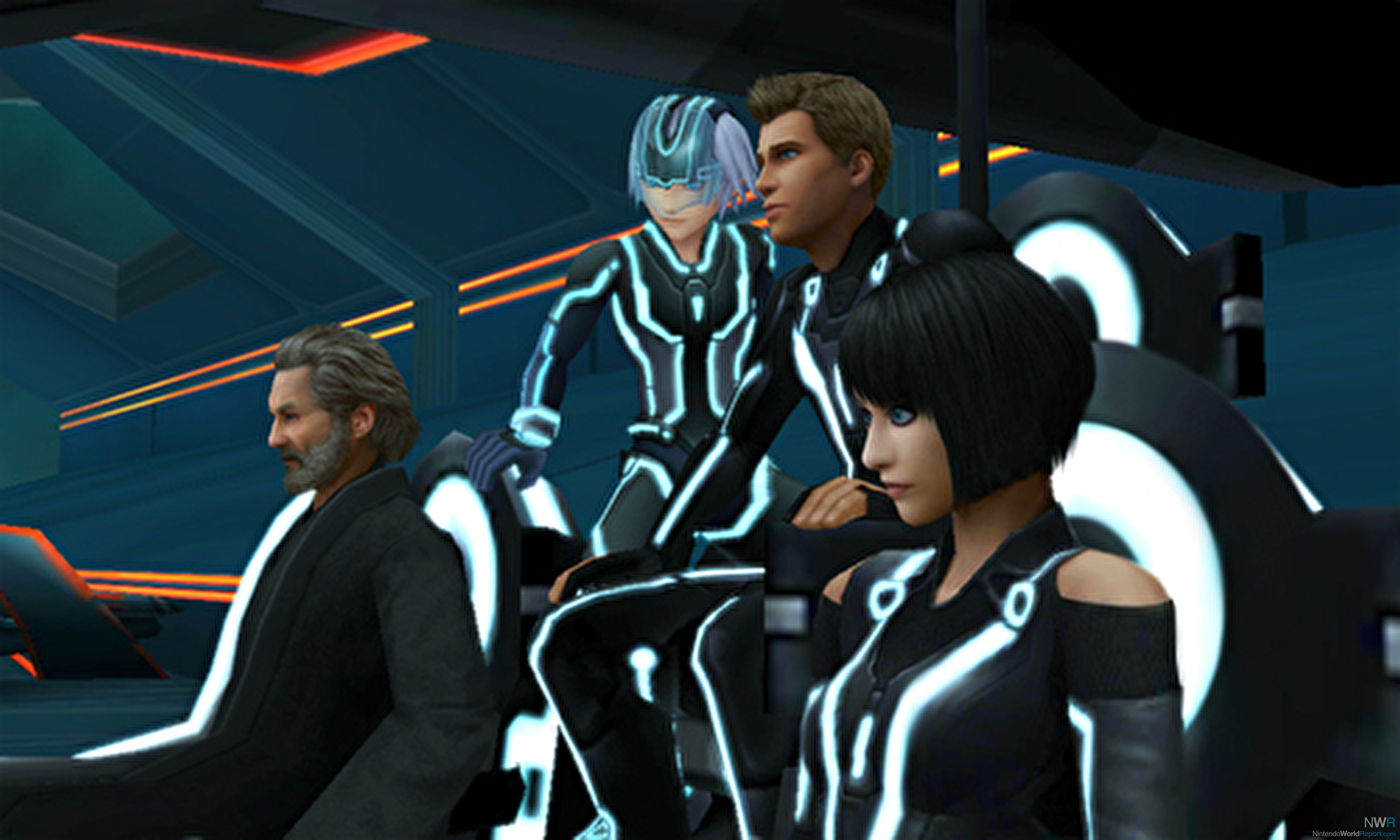 While traversing these worlds, the one thing you will find yourself doing most often is fighting. Sora and Riku battle the same way, utilizing three different strategies. You can mash the attack button for standard attacks, use special deck commands (which feature magic and special combat moves), or use “Flowmotion”. Flowmotion essentially allows you to dash around through the air at high speeds, then transfer the movement into powerful spinning attacks or ground-based blows. While Flowmotion is fun to use, it seems overpowered at times, especially early in the game. Since deck commands offer a great deal of variety, you are not forced to use Flowmotion in battle, but is a fun alternative to traditional combat. 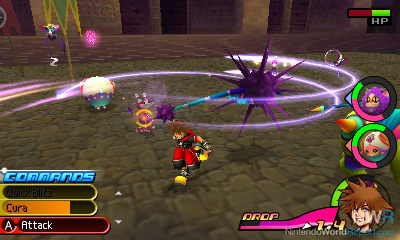 Donald and Goofy are absent from your party this time around, instead replaced by creatures known as Dream Eaters. You can create a variety of Dream Eaters using items you collect from battle, and they level up just like your main character. After a meter is charged, you can use a Dream Eater to help you attack, or borrow its power to power yourself up, depending on your choice of Sora or Riku, respectively. The variety of the Dream Eaters’ unlockable abilities makes discovering the different combinations of their powers a rewarding pursuit.

Kingdom Hearts 3D: Dream Drop Distance is both a great entry in the Kingdom Hearts series and a great 3DS game. The story flaws may distract some, but the remainder of the game is worthwhile. Kingdom Hearts 3D advances the series in both story and innovation, and I can’t wait to see what’s next for Sora and Riku.

A Kingdom Hearts game with a convoluted narrative?  Say it isn't so!  ;)

I'm still a bit wary of this game due to how lackluster that demo was, but I'm still picking up the game tomorrow.  I was a big fan of Birth By Sleep, and this seems to be more or less a continuation of that game, bringing the Ventus/Terra/Aqua storyline/battle system together with the Sora/Riku/Kairi storyline.

Out of curiosity, how does Dream Drop Distance handle the issue of Judge Claude Frollo's voice actor (Tony Jay) no longer being with us?  Did they end up just pulling dialogue from Hunchback of Notre Dame, or did they cast a new voice actor to immitate his performance?

Frollo is voice acted. Hunchback of Notre Dame is my least remembered Disney movie, so I can't really tell how good of an imitation the new voice is compared to the movie.

Kingdom Hearts almost always find a sound-a-like if they can't get the original voice actor. They did that with Lion King, Pirate of the Caribbean, and other movies.

They're gonna need to replace Unca Scrooge soon, too. Wilbur from "Mister Ed" is pushing like 150 or something.

So what is it about this game that makes it so great? Is it the combat? I mean, a 9 is a very high score but based on the text of the review I'm not completely sure what it is about DDD that's so appealing.

From what I could glean from this and other reviews the story is convoluted and hard to follow, the way problem solving is utilised to push the story forward becomes repetitive and the forced 'switching between characters' mechanic sounds frustrating.

Is it that the 'Flow Motion' combat mechanics are incredible and that the graphics are pretty? Is that the draw here? Having never played a Kingdom Hearts game I was intrigued after playing the demo, but during that demo I was unable to get a feel for what the game was 'about'. The 'Flow Motion' stuff seemed neat but I never got a sense of it's usefulness.

I hate when people say that KH is hard to follow. It really isn't.

From what I could glean from this and other reviews the story is convoluted and hard to follow, the way problem solving is utilised to push the story forward becomes repetitive and the forced 'switching between characters' mechanic sounds frustrating.

The plots shown in the individual worlds aren't that much part of the main story of the game in any Kingdom Hearts. The switching isn't as frustrating as it may seem, since it is possible to get an item that delays the Drop. You can basically get through parts of the game with one character until you reach a point where you need to switch in order to progress further, then continue with the other character and so on. The only way it becomes annoying is when you can't prevent the Drop anymore and you find yourself in a boss battle and switch because you'll have to redo that fight.

Is it that the 'Flow Motion' combat mechanics are incredible and that the graphics are pretty? Is that the draw here? Having never played a Kingdom Hearts game I was intrigued after playing the demo, but during that demo I was unable to get a feel for what the game was 'about'. The 'Flow Motion' stuff seemed neat but I never got a sense of it's usefulness.

It becomes very useful when fighting groups of enemies, because you can damage more of them. Also, Flow Motion attacks cannot be disabled (unlike deck commands) or interrupted by enemy attacks.

Thanks, that's reassuring. I haven't made up my mind yet as to whether or not to get this, but the info is appreciated. 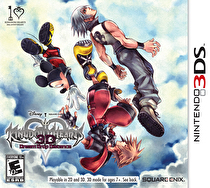