Video games have always been part of the surprise phenomenon that is Dreamworks' Madagascar series since the release of the first movie in 2005, so of course the third installment in the series is receiving an adaptation. Madagascar 3: Europe's Most Wanted for the Wii is a game that does little, wrong or right.

The game follows the basic plot of the film: the four Central Park Zoo animals (Alex the lion, Marty the zebra, Gloria the hippo and Melman the giraffe) are still trying to find their way back home. This time they end up in Europe, where they join a traveling circus in hopes of finally returning to New York. The game follows some of the events of the story well while also adding new ones, which, at most, should please fans of the movie.

Madagascar 3 has gameplay ideas that differ somewhat from what you might think of as the standard game adaptation. The game's story mode has the characters completing missions (which usually involve collecting and fetching), often with the help of another animal friend. The characters each have unique traits that help the other animal overcome an obstacle or reach a specific area successfully—Gloria can swim and dive into water, Alex can do a double jumb, and Melman can destroy some areas with powerful sneezes. Animal control agents are littered throughout the world, and if any of the animals are spotted they must get away, or else the mission restarts. There are also a few mini-games (which make appearances in the main story mode) you can complete with another player.

Madagascar 3 definitely tries to be more creative by implementing the two-player mechanic. The concept works, but doesn't make the game stand out as something worth playing till the end. Some missions are also quite tedious and confusing, often sending the players running around the level, trying to figure out just how to reach a new area.

Madagascar 3 looks decent; the cities the characters visit are large in size, but blurry textures take some of the feeling of grandeur away. The characters resemble their film counterparts well enough, but lack the detail to make them stand out. While we are spared of the infamous Afro Circus jingle from the movie, the music is there to get the job done, meaning it doesn't grate you with its melodies but provides some semblance of ambiance in the game's world. Obviously, the all-star voice cast doesn't reprise their roles in the game, which uses sound-alikes to get the job done. Like everything else in the game, they do a decent job of giving us an alternate interpretation of the Madagascar franchise.

Madagascar 3 is a game best described as at par. The usage of two characters to complete missions is neat, though unfortunately marred by repetitive and confusing missions, while the additional bonus features do elevate the game a bit. You can do much worse than this game, but you can also do much better. 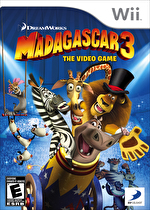