Another summer blockbuster season, another glut of tie-in video games.

It used to be that a video game released alongside a movie was a rushed, inconsistent work with no purpose outside of milking whatever money was left in your wallet after the price of the ticket and a tub of popcorn. But then Spider-Man 2 flipped the script, and suddenly, tie-in games could be not only noteworthy, but fun, too! So while there will always be the Iron Man’s out there, they are now balanced out by thoughtful uses of license, such as Toy Story 3. Likewise, there are those games that refuse binary cataloguing, neither good nor bad, which brings us to Brave.

Brave loosely follows the plot of the feature film, and opens interestingly enough. Merida, the orange-haired teen you most certainly recognize from the advertisements, enters chasing a bear through the woods. This first level combines both tutorial and exposition; the player is introduced to the different mechanics of the game, from platforming to combat, while animated vignettes pop up every few minutes to clue him or her into why Merida is following a giant bear. I was impressed with the streamlined approach here, and imagine kids who don’t want to sit through a five-minute cut scene will have their attention grabbed right from the get-go.

After the tutorial level is over, the player is left at the Ring of Stones, a glorified level select screen. Eight bland, grey portals line the outer rim of the cul de sac-shaped clearing, which teleport Merida to different areas to combat the blight of Mor’du and save her mother from the spell that transformed her into a bear. The different environments in which Merida winds up are varied enough, from volcanoes and frozen landscapes to swamps and castlegrounds. Though reading about the level select might intimate some sort of choice in which level to tackle when, in actuality, they must be played in order from left to right. The player has the option of returning to completed levels at any time, and there are hidden chests they can find in each, but I never once had the desire nor need to revisit a level (the chests aren’t that difficult to find the first time through). 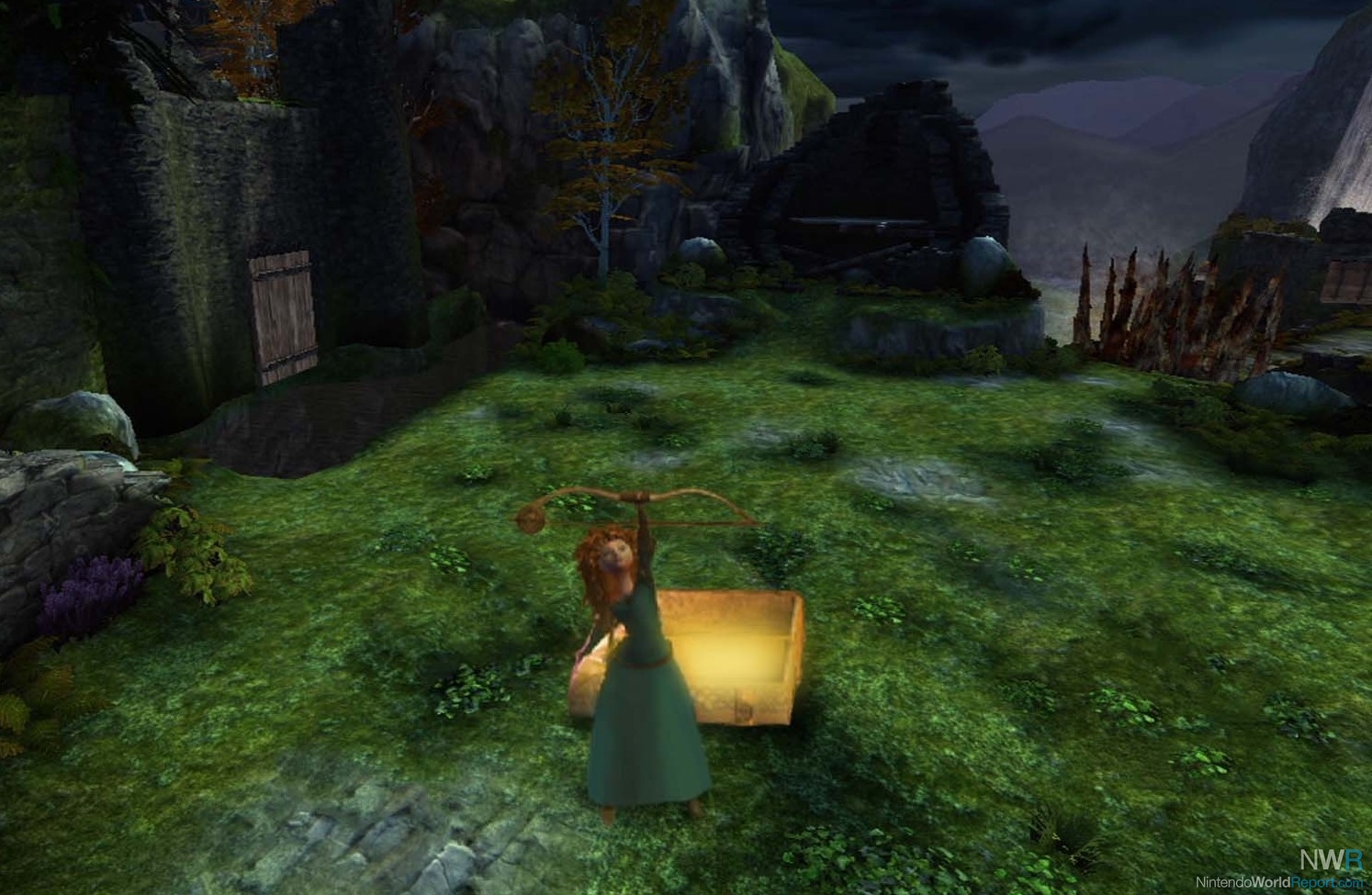 Gameplay is broken up into three different sections. For the most part, the player will be in control of Merida, exploring each level while fighting off the army of Mor’du. Unfortunately, Merida isn’t particularly adept at the exploring part. She controls well enough on solid land, but platforming is, quite literally, a leap of faith. The camera will mostly be zoomed out and angled in a way that makes it difficult to line up successions of jumping from platform to platform. The inexplicable ability to double-jump allows for some correcting of misplaced jumps in midair, but often I found myself leaping and just hoping to see my shadow show up on the platform below me. Missing the platform entirely, which was common, plopped me back to where I was, removing a sizable chunk of my health in the process.

Merida fares better in combat, or at least in half of combat. You can make use of her sword by swinging the Wii remote in any direction. Unfortunately, the motion wouldn’t always register, particularly during more frantic moments of combat where I might be swinging quickly and with less precision. The bow was much more useful, and actually fun to wield. Pressing a direction on the D-pad would cause Merida to shoot an arrow in that direction, helpfully auto targeting enemies in the general vicinity. In later levels, where enemies can surround you, shooting the bow began to remind me of playing Robotron 64—using the nunchuk to move freely while firing arrows in all directions around me. There is also some strategy in combat, as each enemy has an element it is weak against, requiring the player to cycle through his available charms (earth, ice, air, and fire) in order to imbue his attacks with the correct power to easily defeat enemies. Later encounters throw multiple types of enemies at you at once, forcing you to choose which is the bigger threat and should be dealt extra damage.

When not playing as Merida, you play as the suddenly ursine members of her family. Her three little brothers, who have been transformed into bear cubs, pop up from time to time to help open gates or lower bridges via small puzzles. They aren’t too taxing, but I wonder how kids will handle a sudden stop in the action and puzzles that must be completed before pressing forward. Every so often, players will also take control of Merida’s mother in her bear form and be thrust into combat with a large number of enemies. There is no strategy or threat here; mash the A button until everything is dead and move on.

Much like a LEGO game, there are countless destructible items littering the world which gleefully explode into coins upon impact, which the player can spend on new skills for Merida to utilize during combat. Those hidden chests I mentioned earlier also carry either alternate costumes, tapestry pieces that provide boosts to health or damage, or new swords and bows. Again, they aren’t too difficult to find, but they do provide some incentive to explore the nooks and crannies of each level.

A word about the co-op mode: Where a LEGO game will split the screen to allow each player to wander off in any direction, Brave instead keeps the action squarely on the first player. Harkening back to the days of sticking my little brother with playing Tails in Sonic 2, it was all too common for me to start running one way while my girlfriend was exploring another. She would be left completely off-screen and would have to wait to be teleported back to me. I imagine kids, who might not exhibit the patience and understanding to wait and work together, might get frustrated by this.

Brave is an average movie tie-in game, and nothing more. The bow combat is fun, but the platforming and non-Merida moments are an absolute drag. There is some incentive for exploration, but even collecting everything, I was able to finish the game in five or six hours. I would only recommend this for kids absolutely frothing at the mouth for more Brave in their lives. Everyone else? Just go see the movie again.

Thank you for playing and reviewing the game.

This game could have been something great.  After looking at gameplay videos, I was hoping that the game was going to ultimately turn out decently well.  It was the only movie tie-in that I was looking forward to, but man...I should have known better than to think that a movie-licensed game on the Wii would be any good.


At least the game isn't terribly broken and unplayable.

Yeah, it's like I said, it isn't BAD, but it does get sort of bland after a while. If you are in love with the franchise, maybe rent the game for a weekend?

Everyone else? Just go see the movie again.


Was the movie even that good?

Everyone else? Just go see the movie again.


Was the movie even that good?

It was okay, though it lacked the usual excitement that Pixar films are famous for.

The movie just looks terrible from the trailer, I have no interest in paying to watch it.