Renegade Kid drops the bombs with their next eShop game.

With Renegade Kid’s recent retro-flavored resurgence, one aspect of their games seems to trump whatever gameplay lies underneath: the charm. Like their eShop debut Mutant Mudds, the puzzler Bomb Monkey features a glorious harmony of chiptune music, pixelated graphics, and bright colors that makes the experience gel. The gameplay isn’t nearly as robust as their previous effort, but Bomb Monkey excels in its narrowly focused puzzle experience.

The biggest knock against the game is its simple and limited gameplay. The game contains six separate modes, but they are all similar; no one offers more than a few tweaks on the basic mechanic of moving a monkey from left to right on the screen’s top while dropping blocks and bombs to set up combos and clear the ever-scrolling board. However, in Bomb Monkey’s case, the top of the screen is actually the side of the screen, as you control the game with the system held book-style, using the D-pad or touch screen to control the action. The input decision works well, though it’d be nice if menu interaction wasn’t dependent on the touch screen. If you’re looking for a puzzle game comparison, it’s sort of like Wario’s Woods meets Panic Bomber, if that means anything to you (ironically, it means nothing to designer Jools Watsham, who has never played either game). 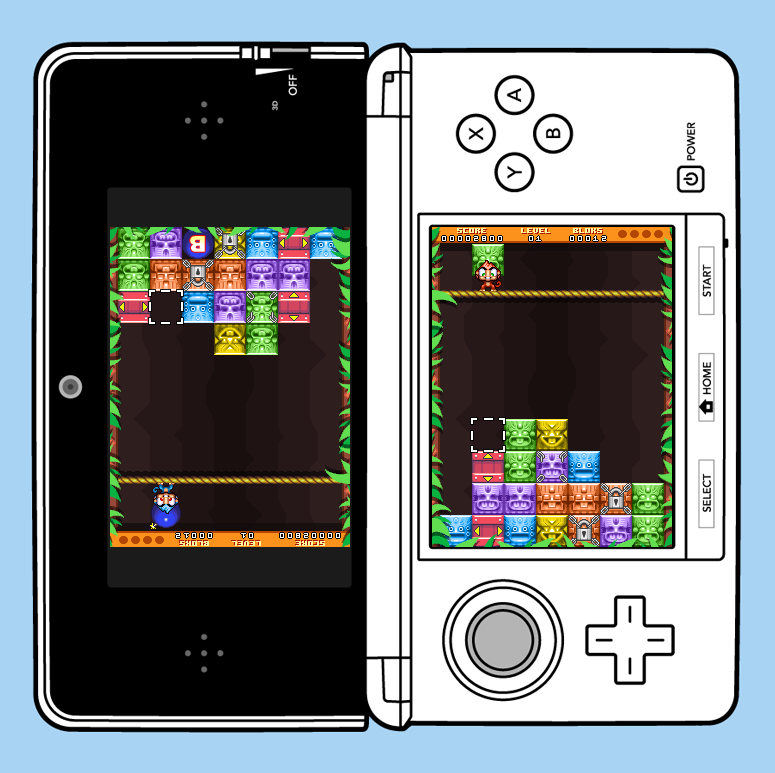 The biggest single-player mode is Endless, which woefully only retains your personal high score. There is no leaderboard, local or online. The other single-player modes (Three Minutes, Rescue, and Numbers) offer some variation, especially in the challenge of blowing up specific blocks in a certain order in Numbers, but they’re focused and limited affairs that serve as only a momentary distraction from Endless mode.

Bomb Monkey’s secret sauce comes in the form of its two-player modes, which have both a competitive and cooperative mode. Two players play on one system, with one using the bottom screen and the D-pad, and the other the top screen and the face buttons. The system gets cramped with two people huddled over it, but the game is addictive, and the best one-system multiplayer game since Photo Dojo.

A no-frills presentation makes Bomb Monkey feel limited, but the puzzle gameplay is sound and the two-player mode is something that could kill friendships. If retro-style puzzle games are your bag, then be sure to get your block-bombing on in Renegade Kid’s latest.

I like Renegade Kid and all, but jesus, the eShop is just overloaded with puzzle games.  I stopped paying attention to any of them months ago.

The lack of leaderboards is sad.

I would love to try out the one-system, two-player mode, to be honest.

One system multiplayer- another reason for the 3DS XL.

How do you not include leaderboards in a game like this in this day and age? That oversight may prevent me from buying the game, which is a shame after how much I loved Mutant Mudds. Maybe if there's a demo it might change my mind.

There won't be a demo.

Did I miss the memo or does Alex Wanschura also do articles for Nintendo World Report?  http://www.renegadekid.com/bombmonkey.htm

He played Bomb Monkey at PAX East and wrote an article for us about it.

I just downloaded the game and it is a lot of fun!  ;D

I've put about an hour and change into the final game and I feel that an 8 is a good fit.  While for a puzzle game, some leaderboard offline or otherwise would have been stupendous, the game is capable of standing on its own merits.  I don't see it outdoing the biggest puzzle games in addiction factor, but the extra modes (especially the 2P ones) keep it interesting when the main game occasionally loses you.

The 2P mode was a big highlight for me at PAX East, and from the little match I had with my brother, it still works well.  Those out getting the XL will benefit greatly with this game!

Going to buy this tonight, forgot to do it last night.

Btw Alex.  Your twin and you are mentioned in the Special Thanks portion of the credits!  Don't you feel super special?

This game is a little weird to me. But I love supporting Renegade Kid. They do excellent work. I'll pick it up in the after I'm done finishing all my games.

I bought it day one after hearing about the single system multiplayer.  Granted it's a drop puzzle game, but it doesn't promise anything more than that.  That's not a bad thing though.  The game truly shines in the 2p modes because of the single system approach.  My girlfriend loves it and I think it's going to be one hell of a drinking game.


Make sure you find a comfy place to play though.  As you get a grip on the mechanics, you'll last longer and will probably be wishing for the warm embrace of KI: Uprising's seemingly less awkward way of holding the system.