Do you have a Circle Pad Pro? Because you're gonna need one.

Right off the bat, I have to confess my love for Metal Gear Solid 3. It is my favorite entry in the series and one of my favorite games of all time. It is insanely replayable, rarely drags, and is surprisingly emotional. I’ve bought the game three separate times—the original release (Snake Eater), the enhanced remake (Subsistence), and the new HD collection. Now I have yet another way to play this epic one-eyed Snake adventure: the 3DS. Now then, given that MGS3 uses every button on the PS2 controller, I was a little wary (as was everyone who played it at E3 2011) of how Snake’s tropical traversal would translate to the 3DS. You need a Circle Pad Pro if you want to play MGS3DS, as the controls without it are reprehensible, but once you have it, the game becomes very playable.

Since MGS3 is, chronologically speaking, the first in the Metal Gear Solid saga, it makes sense that it’s the first  game in the series on 3DS. The short version is that Naked Snake is sent on a sneaking mission to Russia to recover a kidnapped Soviet weapons engineer (who had previously defected to the USA) and, later, take out an American military defector. On the way, you’ll encounter fascinating characters, learn the basis of the entire series storyline, eat lots of unique jungle wildlife, and ogle a bikini-clad blonde spy. There’s also a scene straight out of The Fugitive (“I didn’t kill my wife!”). While fundamentally insane, the storyline is actually the most plausible and grounded of the entire series, which helps the emotional scenes hit home.

This 3DS game is a port of the Subsistence campaign with some nice gameplay tweaks from newer MGS entries, namely the addition of crouched walking and CQC icons. Enemy alert phases don’t last nearly as long anymore, either. Whether the gameplay is switched up any more based on your favorite MGS game (a choice at the beginning of the game), I can’t really tell, and It’s interesting that Portable Ops isn’t one of your choices. Of course, there’s no Metal Gear Online or Snake vs. Monkey this time around, only one of which is somewhat (but not really) disappointing, but the core game is long enough, replayable enough, and features enough unlockable stuff to reward players.

I’m not even going to discuss the default controls because they’re so terrible, so ill-suited to MGS3, that you shouldn’t even play the game if you don’t have a Circle Pad Pro. I don’t know how many of you experimented with Portable Ops or Peace Walker on the PSP; the former was barely playable and the latter was wholly unplayable. MGS games need four shoulder buttons and two sticks—period. With the Circle Pad Pro, MGS3DS is great, though I’m not a big fan of using the touch screen to equip items and weapons, as it seems clunky. You can use the D-pad to open your item and weapon windows, and that’s okay, but it’s still not as smooth as it is in other versions. Still, it’s a minor complaint.

If you’ve played MGS3 before, you should know that the irritating journeys into menus have remained unchanged. You’ll often find yourself digging into your backpack to equip or unequip things,* going into the survival viewer to heal wounds, going into the camouflage menu to change your appearance, going into the food menu to eat something and regain your stamina, and going into the radio menu to call one of your off-site teammates. You’ll spend a big chunk of the game navigating these menus, and it can become tiring. I appreciate the depth of gameplay, but it gets a little ridiculous sometimes.

The game looks good, but it is no better than Subsistence did on PS2—this is most definitely not the HD version. Framerate drops during cut scenes are still present here and textures still look blurry. It’s easy to get turned around in certain jungle areas as well. The 3D effect doesn’t add as much as you’d think because nothing is differentiated like it was in, say, Super Mario 3D Land or Mutant Mudds. This is a consequence of having full camera control in MGS3D, so I just ended up playing with the 3D off most of the time. One 3DS-specific aspect of the game bothered me: walking across wooden suspension bridges requires you to mess with the gyroscope, which is WAY too sensitive. It’s made up for by another 3DS-specific feature: in a nod to Twin Snakes, the Kero Frogs have been replaced by Yoshi dolls.

The game has so many awesome moments it’s difficult to leverage any real complaints against it. My favorite sequences are the game’s HALO-jump introduction, the fight with The End (so many options), and your escape from Groznyj Grad, but the infiltration of the Shagohod hanger and the final Boss fight are also major highlights. Of course, Kojima’s trademark inability to edit his cut scenes to a reasonable length sometimes cuts into the game, specifically the final boss’ lengthy diatribe about everything in the world, which really kills the momentum. Oh, and Ocelot has never been more embarrassing (“Rawr!”). However, unlike the stories of the other games in the series, MGS3 is not backloaded with mythology and is much easier to follow, though series fans will still get the most out of the subtle nods to the story’s future.

For people who’ve never played an MGS game before, MGS3 is going to take some work—it’s an open-ended type of gameplay that’s hard to get used to, but once you become acclimated to how the world works and how many options are at your disposal, it’s incredibly rewarding. You’re definitely being led down a specific path, but the trip is enjoyable and full of choices. This is a great introduction to the series and a great game period. If you have a Circle Pad Pro, I can’t recommend it higher.

*The game doesn’t tell you how to equip new items. I kept finding guns and items and then opening up my backpack and not seeing them. You have to open your backpack, tap an empty slot, and then choose the item you want to put in that slot. It’s tedious, but you should know how to do it.

Hear, hear.  Just in case anyone reading this is some kind of weirdo that hasn't played Snake Eater yet, it's ~maybe~ the best single player game in the last decade.

I expected the 3d to be something like the tekken 3d movie. Underwhelming.

This will prevent me from buying:

"I’m not even going to discuss the default controls because they’re so terrible, so ill-suited to MGS3, that you shouldn’t even play the game if you don’t have a Circle Pad Pro"


I'll reconsider if a Circle Pad Pro is packed in with another game (Monster Hunter?) so that I don't have to pay for one, but MGS just isn't worth a $20 premium to get extra hardware.

If the Circle Pad Pro gets packed in with a game, it'll likely cost more but ultimately, you'd probably pay $10 instead of $20.

I tried the CPP the other day. It's surprisingly comfortable. I'm still not buying one but it exceeded my expectations.

The game is far from unplayable without the CPP, but it would be a benefit to have one. I beat the game the other day, but I will say that two of the boss battles were really hard to control without a CPP.

If these types of games come out for Wii U, Nintendo only die hards like me will be more than willing to pick up a quality game.

8 seems to be the average for the game (Metacritic has it at 81), that is good. I was a little worried after watching GameTrailers' review of it (they gave it a 6.8/10 and said it was the worst version of the game).

I swear I'm the only one who never had any trouble without the CPP. Even the tactical reloading trickery against the last three boss fights was no trouble for me. I must have magic fingers or something.

....except for fighting The Fear. that boss fight was a nightmare and a half using the face buttons to move the camera.

Yeah, the Fear would basically be impossible without the CPP unless you just straight-up poison him and force a stamina kill. Also, if anyone has access to the HD Collection, THAT is the best way to play MGS3. SRSLY.

I disagree with the comments on a CPP being needed to play. In fact, the exclusion of any discussion of the standard set up in this review is annoying (How is it controlled? What makes them so bad? Do you need to tilt the system to move the camera while shouting "move mother fucker!" to control Snake? How?!). If you didn't like them that's perfectly fine, but refusing to discuss them, to talk about why you didn't like them when you're supposed to be exploring the good and bad points of the game....gahh, it's just frustrating to know in depth reviews are becoming increasingly difficult to find...


...anyway. I played it in September and, if you'd have asked me then, I'd have thoroughly agreed that the controls were appalling. But, after giving the demo some time at home in a more comfortable setting and since buying it and putting about 6 hours into it, they're really not awful. I imagine the CPP would make things much better but I'm having no serious issues playing without it. Aiming can be finicky at times when enemies are far away but really that's the extent of my problems with the standard set up.


If anyone reads this and is dissuaded at the thought having to shell out for a CPP just to play this version, give the demo some time for the controls to sink in and you might find it very enjoyable. It's definitely made me a fan of the series and I'll probably pick up the HD collection at some point for the other games I've missed out on.

I bought the game not knowing it supported circle pad pro, and have been playing through it (I just got to The End) without the CPP, and I haven't found any real problems. Perhaps the only time I found myself furiously pining for controls tighter than what could be offered by default, was when I screwed up something awful and tons of enemy soldiers were mobbing me, but that should be a thing you don't want to encounter in the game anyway, so I don't really see the problem.


That being said, based on this review, I think I'll go pick up a CPP.


EDIT: Upon reading thesignpainter's post, I feel he really sums up my feelings everything better than I did 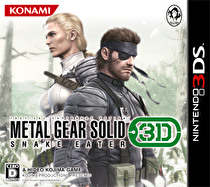