Tales of the Abyss

There's nothing abysmal about this Tale.

Despite the recent influx of great games for the 3DS and the bevy of new titles to come, the handheld is still behind when it comes to its predecessor’s greatest genre: RPGs. Coming at such a time, the 3DS port of the popular PlayStation 2 RPG, Tales of the Abyss, fills the gap nicely. With an average of over 50 hours per playthrough, excluding the game’s numerous extras, Abyss should please even the most enthusiastic players.

In Tales of the Abyss, you play as Luke fon Fabre, the son Duke Fabre of the Kingdom of Kimlasca-Lanvaldear. Seven years prior to the story, a rival country known as Malkuth supposedly kidnapped Luke, causing him to lose all his childhood memories. In light of this incident, his uncle, the King of Kimlasca, placed him under house arrest in his father’s manor.

With the backstory aside, it doesn’t take long for Tales of the Abyss to open up significantly from the confines of the Duke’s manor. Within the first hour, Luke is transported far from the manor to Tataroo Valley, an area within Malkuth territory, after a brief encounter with his master’s would-be assassin, Tear Grants, creates a hyperresonance. Challenged with returning to Kimlasca, Luke and Tear set out on a journey that hurls them into a world of political and religious intrigue. 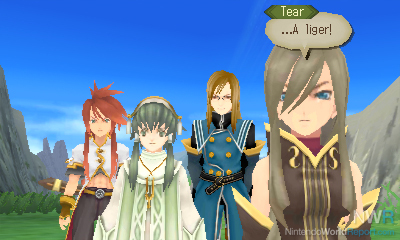 Throughout the journey, they encounter several characters that join them on their quest, including the sadistic Jade Curtis, a colonel in the Malkuth military, and Guy Cecil, Luke’s gynophobic servant. In fact, while the setting itself is interesting, the characters’ relationships and pasts are the true driving forces of the story. This does not end with the allies; even the enemies have interesting pasts that connect them to the events and characters around them. Likewise, most of the story is told in well-written, often humorous fully voiced dialog between the characters. Additionally, 8-4’s localization of the game is superb; each character’s voice and dialog matches them perfectly.

Tales of the Abyss plays similarly to other JRPGs, with a few standout exceptions. Like most other games in the genre, Abyss has a large overworld dotted with several villages, cities, and dungeons. Early on in the game, your only option is to cross the overworld on foot; however, later on a much faster form of travel becomes available. While traveling across the overworld, the frame rate suffers slight drops in forested areas; nevertheless, this is a minor annoyance and does little to distract from the game. The overworld is also home to several enemies; however, unlike many JRPGs, you can actually see them, allowing you the option of avoiding conflict if you please. 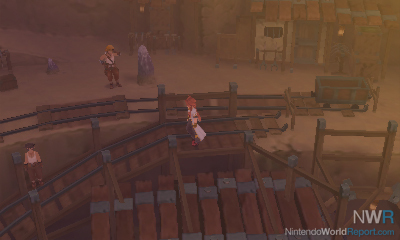 Moreover, the villages and cities in Tales of the Abyss, while small compared to some games, are full of people to talk to and item vendors from which to purchase healing items, food, weapons, armor, and more. Talking to people in towns and cities also triggers many of the game’s side quests. The other areas dotting the map, dungeons, are filled with item chests, monsters, and more. You usually do not visit these areas until the story prompts you to. Once completed, however, most can be revisited. Some even include extra bosses and items. Of course, each dungeon also holds puzzles that must be completed to progress, none of which are overly complicated but still feel well designed and fun. Each dungeon ends with a unique boss that can be a challenge to defeat, but usually doesn’t require grinding.

Speaking of bosses and enemies, perhaps the most distinctive aspect separating the Tales series from other JRPGs is the battle system. Tales of the Abyss uses a variation of the series’ real-time battle system, known as the Flex Range Linear Motion Battle System (FR-LMBS). The FR-LMBS allows you to directly control your character in battle along a linear field, as well as move freely with the addition of a free run skill that you get early on in the game. The battles play out similarly to a fighting game or brawler. Each playable character has his or her own unique skills, or artes, that they can use in battle. Characters that focus on physical attacks, such as Luke and Guy, are able to chain combos using their normal attacks and artes, while other characters are better skilled in long-range attacks, such as magic and archery. While you can directly control one character, the other characters can be directed using the menu, or touch screen. This comes in handy when you want Tear to heal a character, or Jade to unleash a massive fonic arte to devastate an enemy. You can also set a strategy for each character instructing their AI to act in a certain manner. This is unbelievably useful, especially when fighting more difficult bosses. 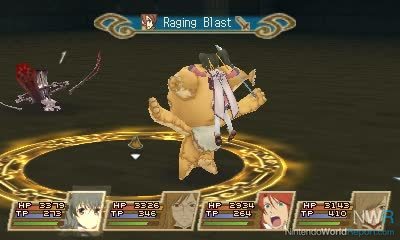 As the game progresses, new features are added to the battle system, the most important of which is the Field of Fonons (FOF). The FOF transforms your artes into more powerful elemental forms. In order to activate the FOF, you must have a character or enemy use an elemental attack of his or her own. This creates a circle that transforms certain artes while standing in it. There are six different elements all together, each of which have the ability to transform artes into more powerful versions. Additionally, each character has special techniques called mystic artes that does massive damage when triggered, as well additional skills that give passive and active bonus to your characters. When used correctly, these additions can make a battle much less difficult, but how you utilize them is up to you.

My only real disappointment with the port is the fact that so little was added from the original PS2 release. Other than the addition of stereoscopic 3D, touch screen artes selection, and shorter loading times, the 3DS port is identical to the original North American release. And while both the touch screen artes selection and the shorter loading times are improvements on the original, the stereoscopic 3D adds nothing to the experience. Often times I even forgot that it was turned on. It’s a pity too, as many other games seem to look smoother when the 3D is turned on, but Tales of the Abyss still has the slightly jagged graphics of the original, even with the slider turned all the way up.

Tales of the Abyss holds up surprisingly well on the 3DS, despite being a relatively conservative port of the original. And with the 3DS’s small selection of RPGs, it’s a must have, and a great entry point in the Tales series.

It should probably be mentioned that the 3DS port does not include multiplayer, unlike the PS2 version.

It should probably be mentioned that the 3DS port does not include multiplayer, unlike the PS2 version.

That's true, but honestly, I never really felt the multiplayer added much to the experience. Seeing as the game's story requires a lot of attention, I'm not sure it lends itself to playing with others as well as less involved games.


Thanks though, I should have mentioned that in the review.

I'm trying very hard not to buy this...

Because it will sit on my shelf for years before I get to play more than five minutes of it.

I'm about 44 hours in, and I feel like Tales of the Abyss should have ended a few hours back.  After the game's second act, there is a very clear moment that feels like the grand finale (you'll know exactly when while playing) but the game just keeps going.  So far the last act feels like the direct-to-DVD sequel.

Having a blast otherwise--I agree that the cast carries Abyss, and some of their dialogue had me literally bursting out laughing.

great review. this is my first time playing thourgh tales of the abyss, and so far is my second favorite "tales of" game. this is my favorite portable rpg so far

im just glad this came to america, a few months after japan and europe, but it did :)

Apparently on clearance sale for $20 at select Target stores now.  If you've been thinking about buying, check your local store now as it's a great price for the game.

Symphonia got me into the series, and Vesperia is my favorite game of all time, and i have to say, i just cant stand this game. The cast consists of mostly boring (Tear) or annoying (Jade, Anise) characters, and the battle system is very awkward, as well as the CCore/FSC systems. I actually found myself not watchining the skits in this game. Sold this game to buy Tales of Graces F. almost 25 hours in after a week and I'm loving it! 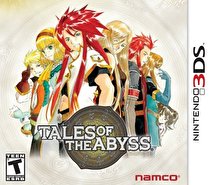