Somebody poisoned the waterhole.

The setup for Dillon’s Rolling Western is novel. Dillon is an armadillo, equipped with some Sonic the Hedgehog-esque spin attacks, who explores wonderful-looking western environments to prepare for an oncoming onslaught of rock monsters in order to protect a village’s supply of pigs. The dialog is pure campy and quirky fun, with interesting looking characters and humorous western accents. The music and sound design is also fun, with some memorable musical bits. Even the touch screen controls, which require you to use your left hand to control the Circle Pad and your right hand to use the stylus (it’s not perfect for lefties, but it doesn’t require precise movement on the touch screen, so it works albeit a bit uncomfortably), are fine, offering a new twist on player controls. 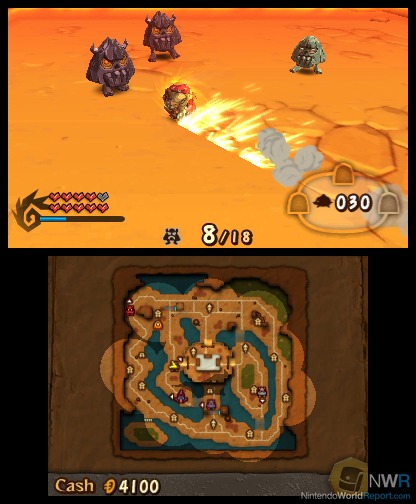 The issue with the tower defense mechanics is that the game’s primary means of progression is just a new map and more (not new) enemies. The maps do get increasingly complex and interesting, but with each area consisting of three 10-15 minute sections, they almost all overstay their welcome. Once you set up your towers, it’s all about routine maintenance, which is done in the preparatory phase of each section. This tower defense trope is especially frustrating on the first play through, because the game limits the amount of money you can bring with you initially. Not only do you have to arduously travel around the map, doing the video game equivalent of chores, you’re extremely limited when you do so.

The enemies, mostly rock monsters that the game refers to as Grocks, furiously come at you when the preparation period is over. The issue with this is that as you progress, the number of enemies reaches ridiculous amounts. The way these segments work is that enemies come out of dens that are marked on the map. To defeat them, you either need to set up a gun tower to shoot them down, or roll into them yourself and enter a small battle arena where you roll to defeat smaller versions of the enemies. The problem is that the other enemies still move while you’re in this arena. It opens up your towers and village to attack from the countless other enemies, especially when these fights involve boss monsters that take a good chunk of time to defeat. It’s frustrating that because of the initial limited funds, you’re basically doomed to encounter heavy losses unless you’re absolutely flawless when you first play through the game.

The game offers a star rating for each stage, which in turn helps you unlock more stages. Unfortunately, outside of improving your star rating and earning more money, there isn’t much of a reason to replay stages. For the sake of this review, I had to force myself to replay earlier stages because I had no will to do so otherwise. It’s just not a rewarding experience, though the game does get easier and less frustrating when you go back to earlier stages because you don't have limited funds. 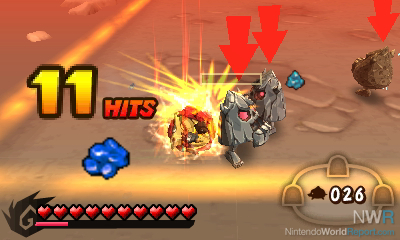 On the off chance you do enjoy the game, there is a lot of it. Even if you don’t replay stages, a straight run-through of the game will take you close to 10 hours. If you try to five-star every stage, you’ll be at it even longer. Each of Dillon’s abilities and weapons are upgradeable, which is a nice RPG-like addition, as his rolling-based attacks receive a significant boost as you progress through the game. It doesn’t salvage the repetition, though.

Dillon’s Rolling Western is an interesting take on the tower defense genre, but it’s just too scattered and plodding to be that entertaining. The look of the world and the characters are charming, but the gameplay is just dreary and repetitive. While the 3DS had an impressive run of great eShop games, it appears that the well has dried up in this desert-ridden title.

No offense guys, but how can you give a review of a game you didn't get your hands on before today?

If you had it before today, ignore me. Though I guess if you weren't having fun after Day 1, there's something to be said for that.

Tower Defense is getting a bit crowded, wasn't planning on picking it up either way.

I do feel the need to clarify this, since I've seen people in other forums knock reviews of this.

We were fortunate to get this game before it came out. So did other sites. That's why you're seeing reviews of this game so soon after it came out.


Also, Ceric: Yes, it is. This game is way better than Monkey Ball 3D.

I have a question though: how much depth does the game have?

Hey Neal, just curious, did you just get this game today like the rest of the world, or did you get an advance review download?
If advance, for how many days did you play? Were they in a row or broken up?

I find this sort of process info interesting.

edit: I see above that you didn't get it today but I still ask the other questions

Hmm, kind of a bummer, I was looking forward to this one.

If you were looking forward to it and are still interested then buy it. A review is just one person's opinion. Some dislike the game while others are really enjoying it. Don't let one review be the deciding factor for you.

If you were looking forward to it and are still interested then buy it. A review is just one person's opinion. Some dislike the game while others are really enjoying it. Don't let one review be the deciding factor for you.

This is good advice, unless you're strapped for cash. I've bought a fair share of games that got mediocre or worse reviews because I was really interested in them, and while I've ended up wasting money on some, others I really enjoyed and wouldn't have had the chance to had I stuck by the reviews. I certainly wouldn't advise ignoring reviews completely, but don't let them have the last word.

Once I heard it was $10 any interest I had in it died. Which was actually none at all.

Hey Neal, just curious, did you just get this game today like the rest of the world, or did you get an advance review download?
If advance, for how many days did you play? Were they in a row or broken up?

I find this sort of process info interesting.

edit: I see above that you didn't get it today but I still ask the other questions

In all honesty, while I played the game more than I cared to to finish the review, I digested it the same way I digest most 3DS/eShop games. That is to the say, it wasn't really broken up, and I went through it. It's just in this game's case, I didn't see many redeeming qualities. Whereas in most of the other eShop games I played, I really dug the experience (for me, even Sakura Samurai seems much better compared to this).

I've seen people say that on repeat playthroughs of levels, it can be empowering (which is true), but its frustrating to me that through your first playthrough of the entire game, it's annoying and stupidly restricted. For those not in the know, the game makes a point of only allotting you a certain small amount of money when you enter a new village, making the gameplay much tougher and frustrating. I don't see the merit in slogging through close to 10 hours of gameplay to open up the fun part, which is just the same shit over again with no monetary restriction. I mean, even RPGs that take a while to develop don't make you replay the first 10 hours with more powers (I think).

On another message board I'm on, people are saying things like:

...I’m glad I saved that spare $10 in my eShop for Dillon’s Rolling Western to come out. Very addictive downloadable game.... Aiming at enemies is a little awkward but still good game so far. A little pricy but I’d give it a shot.

Hey everyone: go buy Dillon’s Rolling Western. It is absolutely fantastic. Everything meshes fantastically together, and it’s made by the same guys behind the Tingle RPGs. Now shut up and give them your money! GO!

Looks like a major case of YMMV with this one.

Who are you calling busted buster?

yea, seems like it is definitely a pretty good game to the writer of this review and the initial commenters ...

to each their own, right? just nice to see it's not a lost cause.  it looks great to me!

It does seem to be a very divisive game. Just judging by the variety of internet opinions, people either love it or hate it. I know I'm not totally alone with disliking it, but I also know that a bunch of people are liking it. That's awesome that people dig it, but I have a responsibility to both myself and the site to relay my honest feelings about the game. If you look above, those are my honest feelings about the game. It didn't offend me personally like it did Alex (I kid. Kind of), but I just thought it was a pretty crappy game.

That being said, if you dig it, don't let my hate get you down. Enjoy the game. Someone needs to make up for my non-enjoyment. :D

For what it's worth, I believe you presented a well-written review, Neal.  Ask me in a month once I've played the game and maybe I'll even share your disappointment!

I mean, one issue your review touches on that might ring true with me is the "bait and switch".  I'm cool with tower defense elements, but I sure am hoping that the action part is the meat of the game... or at least FEELS like it ... know what I mean?  So, we'll see how that shakes out ... that's probably my only real concern so far though.

Also, I think part of me has been STARVING for the days when video game protagonists were mostly fun animals instead of 'roid-raging d-bags.  So, that alone puts the game at a higher baseline for folks like myself.

There's a fire starting in my 3DS,
Reaching a fever pitch it bring me armadillos

WE COULD HAVE HAD IT ALLLLLL
DILLON ROLLING IN THE WESTERRRRRRN

It's tower defense, to me that's a genre practically defined by tedium, repetition and overstaying its welcome but other people absolutely adore that stuff. I'll stay far away, the only tower defense I ever cared about was Plants vs Zombies (well, and Iron Grip Warlords but that's much more FPS than TD). Ninja Town, Lock's Quest, Defense Grid, all these left me bored to tears.

The best tower defense game I ever played is for the DSiware service its called Starship Defense.  I can understand why people hate tower defense games.  I don't think Dillion's Rolling Western is a 5.5 personally but I guess considering the genre unless it reinvents the wheel then 5.5 means its on par/mediocre.

This game just didn't click for me. I strongly disliked it. Still do.

On the other hand, I enjoyed Starship Defense a lot.