This Harry Potter isn't a stud in LEGO Hogwarts.

Though LEGO video games have gained a lot of favour over the past few years, the Harry Potter versions have been up and down. Could this be the game to finally translate these beloved movies to an enjoyable video game? Possibly.

Having never played a LEGO or current-gen Harry Potter game, I was excited to finally experience one of my favorite movie franchises in video game form.

I like the idea of tying several movies altogether into one cohesive, continuous story. The simple, non-voiced cut scenes condense explain (some of) the plot, making it palatable to anyone, regardless of age or language. This is quite a feat, considering how complex the stories become in the final few books. Of course, all the nuance and deep explanation is lost, but that’d be no fun at all.

The presentation and atmosphere are authentically captured, thanks to the great orchestral score taken straight from the movies. All the locations are lovingly crafted and are instantly recognisable, too. The background scenes are rendered in quite a realistic fashion; some are breathtaking and seem to push the Wii hardware, as there are frequent frame rate drops in larger areas. It doesn't ruin the experience at all, but some people may find it distracting.

Populating this semi-realistic world are LEGO objects and characters that can be interacted with; in fact, they are the only things that can be touched, smashed, moved, or picked up at all. Consequently, the game also has a lot of invisible walls. This could well be a part of the LEGO games that people are accustomed too by now, but it was frustrating at times that I couldn’t reach a place in the background that looked interesting. It feels very much like being in a theme park, where the scenery is blocked off with a “do not touch” sign next to it. 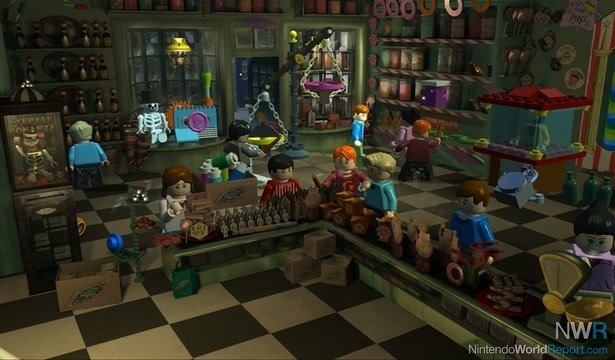 The gameplay is quite simple and basically boils down to doing the same few things over and over: smashing up objects, reassembling objects, moving objects with Wingardium Leviosa, giving an object to someone/thing, and collecting LEGO studs. This sequence of actions repeats again and again, and largely required to pass through to the next room or area. Sometimes the puzzles are fun or interesting; in fact it’s quite ingenious how the same principle can be altered slightly that many times and still remain enjoyable.

This could be due to the fantastic animation found on almost every object. Assemble a movie projector, for example, and it springs to life and starts playing something on the wall. With so many little touches everywhere, it becomes addictive to try and interact with anything you see. It’s not always flawless, though. Sometimes objects get stuck and clip inside other objects, or don’t connect as easily as they should, leading to some frustrating moments where you think you’re doing something wrong, when in fact it’s the game not registering your actions properly.

Drop in/out multiplayer is a nice touch and works perfectly with this kind of game. You’re always in control of three characters, so it makes sense for someone to be able to plug in a Nunchuk and a second Wii Remote and join in at any time. With an extra player, you’ll end up collecting more studs and unlocking things quicker, all the while shooting spells to annoy one another, which is great fun!

There are hundreds of unlocks, mostly extra characters to play as. There are many new ones for this game, including Bellatrix Lestrange and Fenrir Greyback, who has some surprising extra abilities.

There are multiple spells you can use throughout the game, but they are all assigned for one specific purpose, and once you know what does what, it all becomes very methodical. It would have been better if they’d mixed them up a bit once in a while, or encouraged you to use them in new ways through experimentation. It could be due to the fact that only certain parts of the world are interactive, or maybe just because the game is overly easy, but the spells weren’t as fun or flexible as they arguably should be in a game with Harry Potter in the title.

Overall, LEGO Harry Potter is a cute and fun game, but the self-imposed limitations of the block-building franchise take away any sense of freedom or adventure. What’s left is a very simple hack-and-smash puzzle-action game, perfect to play with younger family members, but not one for people looking for an epic, all-out Harry Potter experience. LEGO veterans may see past issues I have with those restrictions, but as a first-timer they definitely stood out to me.

If you’ve never played a LEGO game before and love Harry Potter, this could be worth playing, but for anyone lukewarm on either franchise, you may end up being underwhelmed. 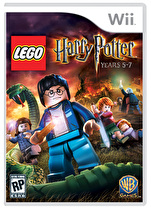