My ultimate ambition...To bring back the dinosaurs!

While the Nintendo DS is all but dead, there are still third party developers out there cranking out new games for the system. Beyblade: Metal Masters, originally released in Japan in the summer of 2010, just took some time before it was translated and released into English-speaking markets. Beyblade is all about over-the-top crazy anime characters, who speak ridiculous dialogue and battle with seemingly simple metal tops.

Visually, Beyblade: Metal Masters uses a mix of two-dimensional sprites and 3D polygonal models. The sprites are used to represent their anime counterparts from the television series, while the polygonal models are used for the Beyblades when you are actually battling. While the 2D sprites and still shots of the characters from the anime are smooth and capture the likenesses of the show very well, the 3D polygonal blades look like something you might have seen in an early PlayStation-era 3D game. It’s functional, but is an odd mix indeed.

Beyblade is an anime and manga series that originated from Japan back in 2000. The anime aired for a few years and was quietly shelved until 2010, when it came back on the scene. Since then, a number of games have appeared on store shelves across the globe on a variety of systems. This latest title is based on the series bearing the same name. Beyblade: Metal Masters has you take control of a Beyblade  (the spinning top) as it is battling in the arena. I suppose if it were real life, Beyblades would all be about statistics, special moves, and luck. The developers, however, give you complete control of the Beyblade, which not only makes it more interesting for the fans, but also makes the game more accessible to people other than the hardcore Beybladers.

The game features several avenues of play, including Arcade, Survival, Multiplayer battle (multi- and single-card), and Mission modes. The Arcade mode is where the meat of the experience is. Although it can be repetitive, players can unlock up to 35 characters by playing through the Arcade mode. They can also go through the 100 levels on Mission mode, which range from things as simple as moving from left to right, to defeating enemies. The multiplayer adds more to the game by allowing players to participate through either single- or multi-card play. Contrary to the cover art, which features the Nintendo Wi-Fi Connect logo, there is no online connectivity to be found in the game whatsoever.

Wielding your Beyblade with complete control in the fighting arena does add some redeeming quality to the gameplay. There are a variety of attacks, dodges, and special moves at your disposal. My favorite nuance in the game is having the ability to completely customize different parts of your blade to maximize performance. The controls in the game are simple. The D-Pad controls the Beyblade, pressing B performs a jump, A attacks, Y blocks, X executes a stronger attack and R does a special attack. While players can just simply go through the game mashing the A button to dispose of enemies, the battle system is complex enough to give players a variety of moves to pull off with directional combinations with the either the A or X button. Before each match, players have to rapidly press the A, X and Y buttons. This determines the speed, power, and timing of your Beyblade in the match and uses the moniker from the series, “Let it rip.” Depending on the outcome, your Beyblade can be rolling across the stage as if it were stuck in peanut butter or be so weak that it will take an eternity to defeat your opponent.

Beyblades: Metal Masters has some great ideas but falls short on many different levels. Having to play through the Arcade mode 30 times to unlock new characters and the “Let it rip” sections before every match are a nuisance. The gameplay is, for the most part solid, but if you are not a fan of the series already, it will be difficult to really enjoy this game. 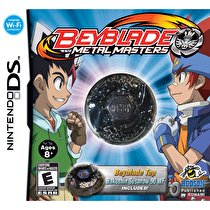