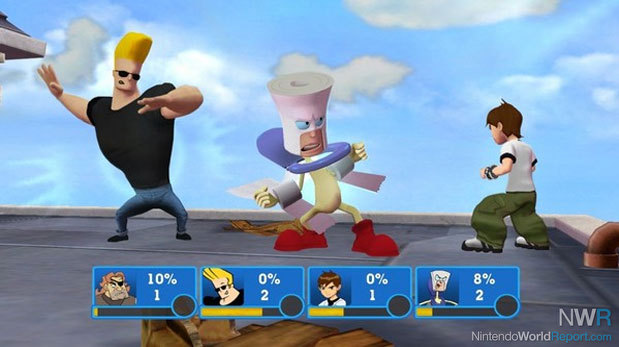 One of the great things added to the game is synergy attacks. There are opportunities during fights for players to summon support characters to lend a hand. For instance, Johnny Bravo and Dracula from The Grim Adventures of Billy and Mandy have a dance party, while Aku will team up with Val Hallen to rock everyone’s world.

There is a huge amount of bonuses in the game as well. It introduces a store where players can spend points obtained after each fight on things like costumes, video clips, stages, and characters. The costumes are usually a completely different set of clothes from what the character usually wears. The clips are famous scenes from each of the shows, and the characters are fan favorites such as The Scotsman and Aku from Samurai Jack and Has Delgado from The Grim Adventures of Billy and Mandy. The amount of unlockables is really astounding, and can keep players coming back for more.

The multiplayer is as awesome as it is confusing. It’s easy to pick up and play. Players can choose their favorite Cartoon Network stars and start playing fairly easily. The only downside is sometimes it’s hard to distinguish characters from each other when they clump up or when the stage is deceivingly small. There is a general sense of chaos, which can be a good thing in a good ol’ fashioned fighting game. Players should just be wary of how large a stage actually is before fighting on them. 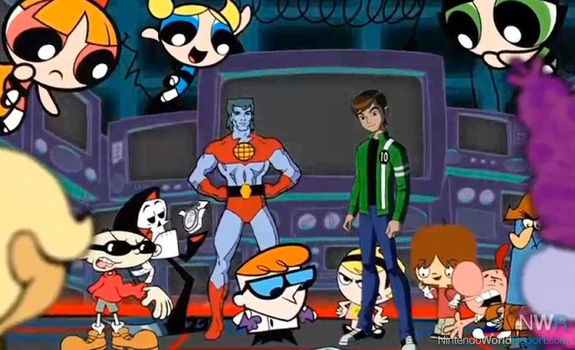 The heroes have arrived and are ready for battle.

One of the only things that could be seen as annoying is the voices. For anyone who grew up with the TV shows represented, some of the original voice actors didn’t reprise their roles and have been replaced by other voice actors, giving the characters an odd sound when they shout out their catchphrases. The controls can also be a little hard to get a hold of without a GameCube controller. Luckily, the game supports the Classic controller as well as the GameCube controller, so players have a choice when it comes to how they want to play.

When a fighting game gives you this many choices and unlockables, it’s hard to turn away. The story may be a little bland, but it’s easy to overlook when you see Dexter kick the snot out of Aku or Vilgax.