It's not a perfect translation to the 3DS, but it's packing a lot of firepower.

I'll be honest, I didn't hold high-hopes for Ace Combat 3D, now renamed Ace Combat: Assault Horizon Legacy. The series, known for blistering speed, luscious visuals, charmingly obtuse storytelling, and fantastically overdone music just didn't seem like it was going to work on a 3DS. Ace Combat, for better or worse, likes to "take it to eleven." While not quite as "extreme" as some of its console brethren, I'm pleased to report that that this is a true Ace Combat experience.

As an Ace Combat game, Legacy puts you in the cockpit of the world’s most advanced aerial combat fighters. Each mission has a series of targets designated for destruction while under enemy fire, and presents unique challenges that guide aircraft selection and armament decisions. Legacy adds the Maneuvers system to the traditional Ace Combat formula. It allows the player to get a position on a hostile aircraft with the press of a button after the Maneuver Gauge is filled via extended dogfighting. It's a nice addition, as getting position without it can slow down the otherwise extremely fast game. 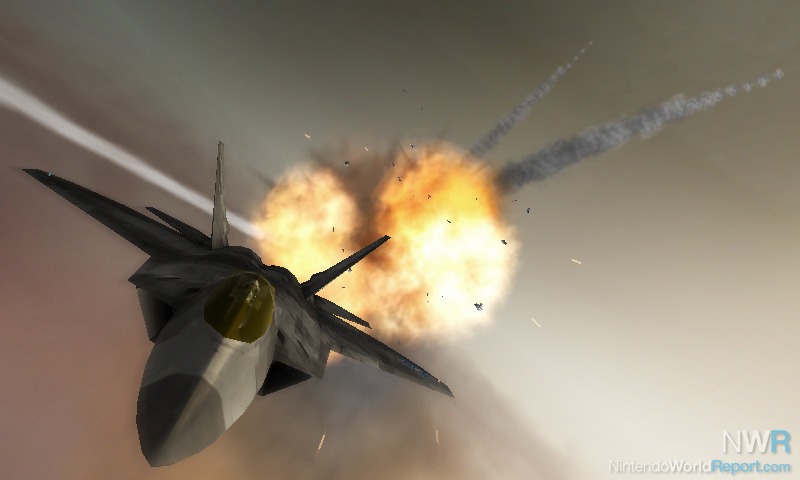 You should probably keep eyes ahead at 1000 MPH

Legacy’s gameplay produces the right amount of tension and elation. While most enemies are nothing more than targets to be swatted from the sky, there are enough opportunities for the high-tension combat that left me gripping the 3DS with such intensity that I may well have turned it into diamonds. Blasting waves of hapless foes made me feel like an omnipotent god, and the kind of fights that are decided with split-second decision making instill a real sense of dread. The emotions can switch from fear to elation and back in a matter of seconds.

The biggest problem with Legacy is that it just isn’t enough of it. Many of the missions are very short, and the core game can be completed in less than five hours. While there is a great deal of content to unlock, including new aircraft and weapons, as well as "challenge" and "special" missions, it is still a very short title. It's a bit disappointing; the action doesn't reach its fullest until late in the game and by that time it's very nearly over. It also does not feature any form of multiplayer gameplay. While the story can be enjoyed multiple times, and in fact the "Ace" difficulty that is unlocked after the first completion of the game is a fantastic step up in difficulty, it still feels like a bit of a light package. 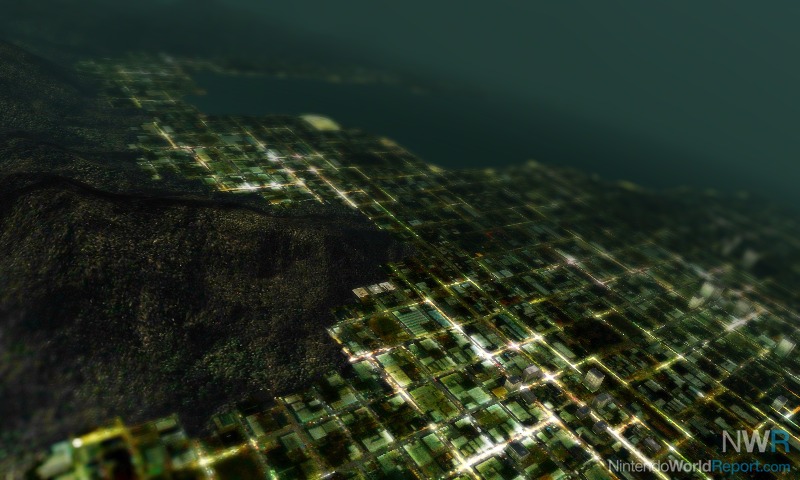 The controls work well on the 3DS. The Circle Pad manages direction, the face buttons and D-Pad manage weapon systems and avionics, and L and R control braking and throttle. The only real problem with the controls is one of the 3DS' own ergonomics. Holding R for extended periods of time is not comfortable. Given that there is rarely any reason to let off the throttle this can become a nuisance after prolonged gameplay.

Visually the game is a stunner. The aircraft models are all detailed, although it’s not always easy to tell at Mach 2. The environments are dutifully rendered using satellite imagery and present diverse geographic locations and climates. The 3D effect isn’t always entirely apparent, as much of the action takes place above the horizon, leaving little to judge depth against. However, when playing from the cockpit point of view, the instrumentation makes very aggressive use of 3D. The few times 3D really impacts the game are when maneuvering in closed spaces, such as ravines, or when an enemy buzzes past the cockpit at close range; both are likely to produce involuntary shudders and a firm grip on the 3DS. 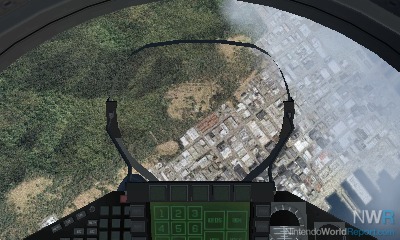 The cockpit view is almost too much

The experience of jet combat is driven home with a mix of sound effects and music that would be regarded as superlative on a console. Missions are filled with the roar of the engines, the sounds of combat, and the radio chatter of combatants striving to get the edge on their foes. Sure, much of the dialog is cheesy, but it’s part of the charm. The huge soundtrack is not only musically diverse and technically proficient, but follows the arcs of the story, reinforcing all the action on screen. Most impressively, there’s no computer-generated music here: everything is a live recording. Tell me another handheld game that has both a choir section and a hip-hop track.

The move to a handheld also seems to have met with some technical limitations. The number of aircraft on screen seems limited to about ten, which does mean there are fewer things shooting. It also suffers some minor slowdown when action gets more intense. The slowdown is infrequent, so it isn't clear if turning off 3D would prevent it, but even if it would, the 3D is worth dealing with it anyway. 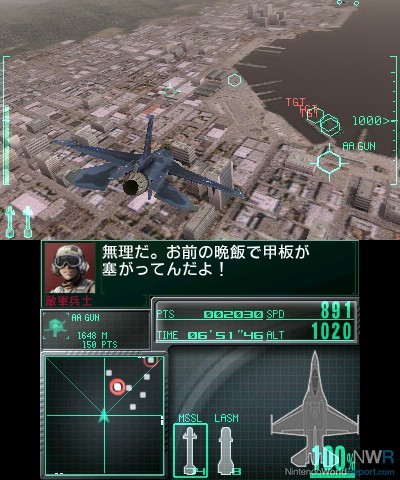 Ace Combat: Assault Horizon Legacy isn't a perfect translation of the Ace Combat series to the 3DS. There are minor technical limitations and a general feeling that the game could have a bit more content. However, Legacy is unquestionably a great Ace Combat title on 3DS. Beyond just the graphical limitations, this is a game that feels as if it could not have existed on the DS in a scaled-down form. The speed, the style, and action are all fantastically engrossing. In terms of sheer thrills it's hard to imagine there's much like it on the 3DS.

I still miss the Japanese title of Ace Combat 3D: Cross Rumble. Oh well. Props to mentioning that the campaign is a remake of Ace Combat 2. It was hinted at lightly in the few trailers for the game.


The short length of the campaign has been a trend in Project Aces games. Of relevance, Ace Combat X: Skies of Deception and Ace Combat (X2): Joint Assault for the Playstation Portable have short 5-6 hour campaigns even accounting for branching paths. Even the home console entries of Ace Combat Zero: The Belkan War (PS2) and Ace Combat 6: Fires of Liberation (X360) have the same short campaign lengths, although that may be because I'm very familiar with how to play the series. I've read that Ace Combat: Assault Horizon also has a short 5 hour campaign.


In the case of Ace Combat X and Joint Assault, they both had multiplayer offerings with Joint Assault supporting online play. It is a real shame that Ace Combat: Assault Horizon Legacy doesn't have similar content. Heck, it would've been nice if Namco Bandai ported over the campaigns of Skies of Deception and Joint Assault to give something more for 3DS owners to play rather than grind the Legacy campaign to unlock all the planes and weapons.

I would have figured if they were going to reduce the plane count on account of the hardware they would turn up the AI's aggressiveness to compensate. The games always felt a little on the easy side. I know it's meant to make you a more badass pilot and stroke your ego, but even in 10 generics Vs 1 on Ace difficulty you never feel threatened. Even the Ace squadrons lack the aggressiveness to make them a threat not to mention whole fleets are taken down like fish in a barrel.

I guess I will put it on a want list. No rush.

Guess I'll have to pick this one up in the bargain bin. It looks pretty cool, but I'm not spending forty bucks for a short game.

The plane tuning is in place. It is monstrously expensive to make a major impact. Heck, after two plays I don't have enough money to unlock a third of the planes, let alone buy kit to upgrade them.

Good to hear that the plane tuning is in. The high prices of the parts must be carry over from Joint Assault. The prices of planes in Joint Assault were much higher then in previous Ace Combat games.

It took the winnings from about 2/3 of a game at Ace difficulty to buy the F22.