Fans of the series will find a lot to like in this 3DS adaptation.

The Sims has always been a series that straddles the line between virtual pet games like Nintendogs and more complex management games like SimCity. When it gives you just enough of a goal to keep you moving forward while remaining largely open-ended, it can be very addictive. The Sims 3 Pets for 3DS does a really good job of translating the experience to Nintendo’s handheld.

To start you off, the game has you create your Sims. I made the maximum of three—two people and a pet dog to go with them. You get the option of various personality traits and lifetime goals, each of which has a bearing on how your character will behave. While my one Sim’s neatness means he’ll keep the house clean more consistently, it also means that messiness, as will often happen with a dog in the mix, will bother him a lot more. Since you’re free to choose any three traits you like, tailoring them to how you’ll play the game is important. 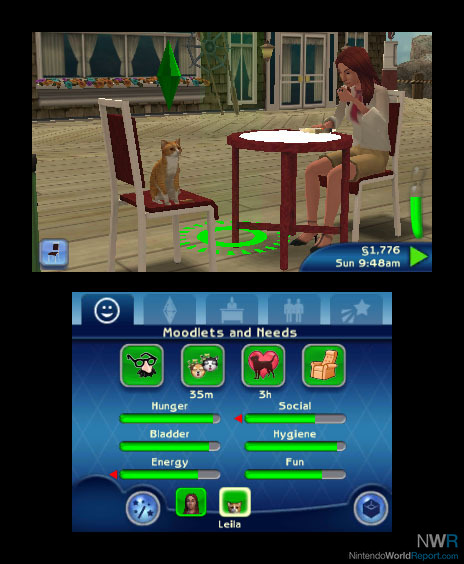 Once you get into the game and buy the only house you can afford at the outset, you’re tasked with managing the lives of the inhabitants. With six main meters measuring everything from how hungry your Sim is to how much fun he’s having, as well as a number of situation-specific boosts and penalties, that’s a lot of work. Telling your virtual people (and animals) when to eat, when to sleep, and when to go to the bathroom may not sound that fun, but like with any management simulation, it can feel really rewarding to have everything working smoothly on a consistent basis.

The main thing that keeps you moving through the game is the system of Wishes. At any point in the game, each of your Sims will have certain things they want to do. Fulfilling these desires, in addition to making the Sim happier, gets you points that can be used toward major rewards, from all-but-eliminating certain basic needs, freeing up time, to doubling the amount of money your Sim takes home each paycheck. This provides just enough of a structure and goals to keep you going, as well as a way to track your overall progress through a very open game.

With the title being The Sims 3: Pets, you know the addition of animals is a big part of the game. Dogs and cats are treated as their own Sims, and can be controlled in a more limited fashion than people. Pets are a bit of a mixed bag. While they can cause trouble, like digging up your yard, they can also be useful, like when that digging produces valuable trinkets that are converted immediately into cash. While they add an interesting dynamic to the game, if I were starting over from scratch I’m not sure I’d make any pets in my group. 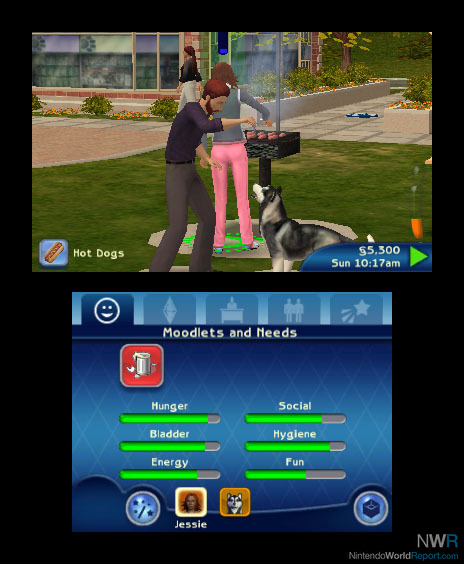 The game’s control scheme really shows that it’s being scaled down from a PC game, as it uses every button on the system as well as extensive use of the touch screen. The touch screen handles various status screens, displaying your Sims’ moods, traits, job performance, and wishes. The Circle Pad, D-Pad and buttons handle your control cursor, as well as task control, camera control and game speed. Switching between stylus and button controls can be uncomfortable, but it’s handled about as well as I’ve seen it handled.

I think the biggest compliment I can give this game is that I have a hard time putting it down. It does a great job of adapting the PC formula to the 3DS hardware, and it’s just as addictive as it ever was. If you’re a fan of the PC game, this is a great way to take it on the go.

How extensive are the asshole physics? It isn't a Sims game until you kill someone with a stove because they are too stupid to runaway and have the partner mourn uncontrollably over the urn while the house is still on fire, killing everyone in the house.

I didn't test that out. I didn't think of it, but even if I had I wouldn't have wanted to lose my guys.