Nintendo’s EAD Tokyo studio, who made Donkey Kong: Jungle Beat and the two Super Mario Galaxy games, never worked on a portable before making Super Mario 3D Land. Fortunately, they have some sort of innate knowledge of how to make a portable video game, as they created a game that doesn't only excel at being a great Mario game, but also at being an amazing portable game.

The levels in Super Mario 3D Land, which are an interesting mix of side-scrolling and 3D exploration, are bite-sized. If you wanted to, you could probably blow through most levels very quickly, especially if you keep the rejuvenated Tanooki power-up. Even if you do take your time to explore and find the delightfully well-hidden star coins, each level is only about five minutes long. It succeeds at being a game that you can quickly play a level or two of when you’ve got some time to kill. 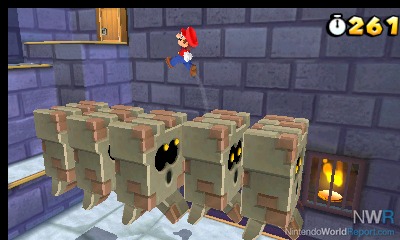 Most of the game’s levels have the same feel as Galaxy, though they’re slightly more down to earth (literally). A lot of the Galaxy tropes show up here, but are melded heavily with traditional Mario roots. For example, there are flagpoles at the end of each level, and small Mario is a thing. While it is intriguing, the experience is quite different in a good way.

What’s kind of weird are the controls. The game sort of controls like a 2D Mario game in 3D space, especially since you hold a button down to run, something you never did in analog control Mario titles. Wall jumps are around, but oddly, backflips can only be pulled off when moving, which makes some of the finer platforming more difficult. Regardless, after you learn the rules, the controls work. Outside of some depth of field issues, the controls never failed me. 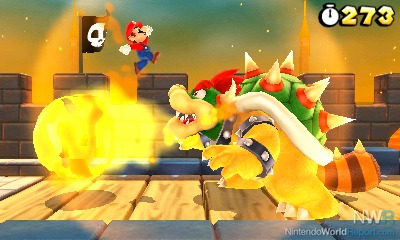 The 3D effects in the game look fantastic, and usually aided me in my quest. However, there were a few times where I felt the 3D effect betrayed me, as I had immense difficulty judging distances. This could be because I wasn’t quite used to the 3D, but since there isn’t another game like this, it might be a common issue for players.

Super Mario 3D Land is packed with content, with eight primary worlds containing five or six levels each (in addition to a healthy amount of bonus levels). The boss battles, featured at the conclusion of each world, vary from fun to repetitive and lame. The best are the Bowser-focused ones that feature platforming instead of direct boss interaction. On the whole, the available power-ups are great and empowering, with the exception of the propeller block, which makes for a cool 3D effect but lackluster gameplay.

EAD Tokyo’s 3DS debut is marvelous, and filled with almost endless creativity. The control and graphical quirks are a little off-putting, but more because we’re so accustomed to 3D and side-scrolling Mario being separate things. Super Mario 3D Land combines the two, and it works well. If you own a 3DS, you should likely get this game. It’ll last you a long time, and it’s a great new Mario game.

I'm actually a little surprised to see you doing this review with Skyward Sword on your plate as well.

So, given only $40, should i get this game or should I wait for Mario Kart 7?

I hate to harp (not really) but a "backflip while moving" is actually a "U-Turn Jump". GET IT RIGHT, RONAGHAN.

No, it's not. It's called a Side Somersault. There's also a Crouch Jump a la SMB2.

Should I note it pained me to call the Racoon tail the "Tanooki suit." You don't turn into stone with that power-up!

Nice review though I would have bought this game even if it somehow insulted my mother to her face. I'm glad that that there are a good amount of levels. That was the one thing I was somewhat worried about.

I assume they went with a full suit for the leaf power to be cute. The devs may not have seen the disconnect that we do since the "raccoon" tail is just a tanuki tail in Japan. The leaf is associated with the tanuki in Japanese mythology -- you can also see the leaf logo associated with Tom Nook in Animal Crossing.

I guess I'm still confused on what makes it "packed with content" and worth the $40 price (I'm poor right now!).


You mention even collecting the stars you can finish each level in 5 minutes or so, and there are 8 worlds with 5-6 levels a piece. So at 6 levels, 8 worlds, 5 minutes you're talking about 4 hours to finish the game.


Is the extra content the bonus levels? How much overall do you feel that adds to the time it takes to completely finish the game to make it packed with content?

However, read our other coverage of the game, and maybe the latest Iwata Asks. There is an entire extra 8 worlds that are hard as hell and awesome

That would do it, I'm sold. Thanks!


Now if only more people had 3DS systems so Gamestop had a reason to sell this at midnight D:

That would do it, I'm sold. Thanks!


Now if only more people had 3DS systems so Gamestop had a reason to sell this at midnight D:

Should I note it pained me to call the Racoon tail the "Tanooki suit." You don't turn into stone with that power-up!

So there's a separate power-up that lets you turn to stone?  I saw a video recently that shows that it is possible to turn to stone somehow.

About how long did it take you to complete the 8 worlds? I am extremely excited for this game but am concerned about the standard length minus the bonus stuff.

Good, good. It's funny to think how worried some people were about this game... what nervous Neds!

About how long did it take you to complete the 8 worlds? I am extremely excited for this game but am concerned about the standard length minus the bonus stuff.

4-5 hours or so. I collected all except two Star Coins initially (involved replaying some levels).

How many warp zones did you come across?

Hmmm, a 3D Mario game where the levels are as quick as Super Mario bros Wii, but plentiful as any other Mario game!! Ingenious!!!

You had to do that with the digital controls.

I'm sure I'm in the minority, but I prefer having to hold down the run button. It feels like I have more control that way.

I'm sure I'm in the minority, but I prefer having to hold down the run button. It feels like I have more control that way.

I had no issue with it in this game. It just feels like side-scrolling Mario games.

My copy will arrive from Amazon on Tuesday, the same day as my last final. I cannot wait.

Does anyone know if this game has more then 1 save file?

Hasn't every Mario game with a save feature had multiple save files?

Hasn't every Mario game with a save feature had multiple save files?

Yes. Going all the way back to Super Mario World, there's always been at least 3 save files. 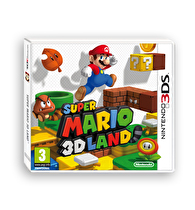