Nintendo’s got the Tetris license back. Remember that awesome Tetris DS game? It was on store shelves for like three months, but Nintendo lost the license and was unable to print more copies. Tetris’ big return to Nintendo systems was with Hudson’s Tetris Party games for WiiWare, DSiWare, Wii, and DS. The Tetris Party games had multiple modes and encouraged multiple players. Tetris: Axis, the newest Tetris game for 3DS, does as well, and should probably be called Tetris Party 3D given its content. While Nintendo's picked up publishing rights in North America, development remained in Hudson's hands.

Of course, there are a wealth of “new” modes. One such mode, Jigsaw, has you rotate puzzle pieces and stack them up to match the image on the bottom screen. Stage Racer Plus has you maneuvering a Tetrimino through a  vertically-oriented maze at an increasing speed, rotating the block or using the “jump” mechanic to squirm through. The best new mode—Fit—is an interesting puzzle-based game in which you’re given a flat square of tiles with several blank spaces. You must use the Tetriminos you’re given to fill in the holes. Sometimes it’s pretty obvious where certain blocks go, but at other times it’s quite difficult. This mode also makes the best use of the system’s stereoscopic 3D, as you’re looking down at the tiles and dropping blocks into the blank spaces. Tetris: Axis even tosses in two AR modes that use the item block AR card included with the system. Neither one is particularly riveting, especially since there are non-AR versions of those games that don’t make you get up off the couch (one of them has you rotating around the AR card—no thanks!).

Almost none of the alternate modes are worth writing home about, unfortunately. You’ll spend the majority of your time playing classic Marathon (Endless) mode and the new, faster-paced Fever mode, in which you work to get a majority of points in the span of a minute, with a catch: the game field is narrower than usual, and power-ups come into play. You can rack up some pretty sick combos, and I found Fever mode to be pretty addictive. Another addictive mode is Bombliss Plus, which involves bomb blocks and combos. But again, nothing tops Marathon.

Multiplayer was a wash. My 3DS wouldn’t connect to people on my Friends List who also had the game (we could see each other in the lobby, but couldn’t connect), and when I went into a World Lobby, I was the only person present…every time. If I had a friend with a 3DS, we could do download play. If you’re starved for human opponents, Tetris: Axis does give you a nice Versus mode in which your opponents are Bomberman characters. You clear some lines, they get more blocks on their screen. There are also power-ups, not all of which are helpful, and almost all of which take you out of the game (tap the touch screen! Blow into the mic!).

So despite the presence of three or four interesting modes, I can't heartily recommend Tetris: Axis to any but the most rabid fans of Tetris. It's just one of those games that really is best played in its original, simple Marathon mode. I mean, think back: when you played Tetris on the Game Boy or NES, did you touch Mode B (where blocks appeared at the bottom of the screen at start) nearly as much as Marathon mode? Of course not—that's the mode that everybody loves. So when you give me jigsaw puzzles and ask me to rotate them around to match a picture on the bottom screen, it's just not going to be fulfilling. Overall, that's how Tetris: Axis feels: it's just too much crap piled on top of a few genuinely interesting modes to be worth your money.

Actually I loved Game B in the original Tetris for Gameboy.  Blocks didn't appear at the bottom.  You had to clear a certain number of lines and depending on what difficultly level you chose there would be garbage stacked to a certain height.  It was kinda like coming in and fixing someone else's worst game of Tetris ever.  It was great because it made you think quick.

I would say I don't remember a better "Game B" or other mode in a Tetris game until Push Mode in Tetris DS.  Survival is pretty cool in Axis too.

Good god I love this game. 6.5 is way too harsh. All the modes they have in the game are a nice change of pace. I do agree with the 3D not doing much, but as a whole this is a fun experience. Just because it lacks Nintendo games playing on the top screen doesn't make it a bad game.

Sucks that you weren't able to connect to any opponents in the online game.  I had a blast when I played against opponents in the World Lobby.  The only issue I had with it was the cheapness of the screen-swap item - stack your screen to the top with garbage and trigger the screen swap to pretty much insta-bone your opponent.

Tetris Axis needed the extra modes to justify the price. Since everyone with a 3DS system also has the option to just buy Tetris Party Live for $5 from the Nintendo Shop, the retail version needed to add extra value somehow.

I liked Game B, you jerk.  I won't be buying this, though.  I'll hold out for Tetris on the Game Boy Virtual Console.

I actually had a whole paragraph about how everyone should just buy the DSiWare version of Tetris Party (or the $10 one on WiiWare) but it's against review policy to talk about pricing.

My favorite version of Tetris was the NES one, with the really bright bubble blocks. HEAR MY PLEA, NINTENDO!

I got this over Tetris DS for all its different modes and glad I did. I have had problems connecting online to play a non-item game but would rather play single player anyways. I do like comparing my score to others on the leader board though.

I'll admit, I got this game mostly for "Bombliss Plus." I haven't tried all of the modes yet, but honestly, it just isn't worth $40. I don't like most AR stuff because the 3DS cameras are so shitty, and the 3D as mentioned is weak at best. It doesn't feel like a 3DS game should. I love Tetris, but this is definitely overpriced.

I was tempted by this game until I found out that it has many of the same modes as Tetris Party, which doesn't have very many interesting takes on the game. However, I don't think it's that regular Tetris is the best, it's that most of the modes games like this come up with aren't very well thought out. Some of the modes, like the co-op mode, aren't taken far enough, and others don't really add anything. Tetris DS had some good spins, but that's about it.

What I really want is a 3DS-specific download version of Tetris, with the Marathon and one or two other modes and online play/leaderboards that I don't have to clean the fridge for like I have to with the DSiWare version. Or better yet, Tetris DX for Game Boy Color on the Virtual Console.

I don't think Tetris will ever come to the 3DS eShop because Nintendo won't pay to use the licence again.

I'll admit, I got this game mostly for "Bombliss Plus." I haven't tried all of the modes yet, but honestly, it just isn't worth $40.

Yeah, I'm not expecting it, but I can dream.

I'll admit, I got this game mostly for "Bombliss Plus." I haven't tried all of the modes yet, but honestly, it just isn't worth $40.

*checks amazon receipt* Huh, well it's alright then at $30. Must've been thinking about Bit.Trip. 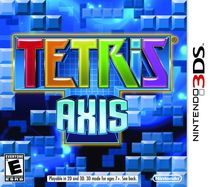