It's a heady blend of trance and eyestrain.

Between 2009 and 2011, Gaijin Games released six riffs on classic games to the WiiWare service. Collectively, the Bit.Trip series won praise for its psychedelic take on simple gameplay and the rhythm genre as a whole. Bit.Trip Saga is one of two retail compilations released – this one is for 3DS – of all the Bit.Trip titles. Some melted eyes aside, there is a lot of addictive gameplay in this cart.

For the sake of brevity I’m going to list each of the included games with a link to our initial review of the WiiWare version, with notes on the 3DS experience. Besides control adaptations and 3D graphics, the games are unaltered. 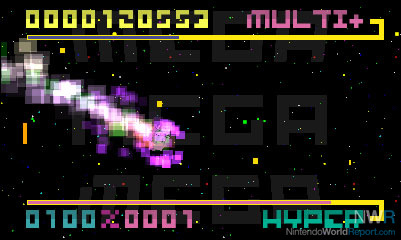 In 3D, no one can hear your eyes scream

Bit.Trip Beat: The later release of Bit.Trip Flux, which is really just a more developed version of Beat, relegated this title a bit obsolete. The 3DS version features two control schemes: stylus and Slide Pad. Stylus controls map where you’re touching to the location of the paddle on-screen. Slide Pad controls move the paddle up and down. I found the Slide Pad to be too sensitive, often sending the paddle rocketing to the top or plummeting to the bottom with even the slightest touch.

Bit.Trip Core: The controls of Core remain unaltered from its WiiWare predecessor, having simply mapped them to the D-Pad and face buttons. There is a lot of rolling the thumb around the D-Pad in the game, and on the 3DS that can be uncomfortable. The 3D effect lets the game’s action appear above the future city background and below the score and other HUD information.

Bit.Trip Void: The Slide Pad stands in just fine for the control stick here, making the issues with it in Beat all the more puzzling. This game probably makes the best use of the 3D effect. The void looks more rounded, despite being nothing more than a series of pixels, and seems as if it is stuck to the top of the screen and protruding downwards into the gamespace. The game itself is one of the most simple, and one of the most addictive.

Bit.Trip Runner: This fun rhythm platformer plays pretty much exactly as its WiiWare counterpart. The 3DS version adds a very subtle 3D effect to give the stages depth, though the game sprites are still mostly flat. It is worth noting that the 3D effect seems to cause notable slowdown in Runner, and turning it off makes the game run much more smoothly. 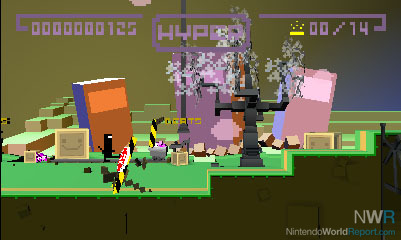 Runner is a hypnotic experience

Bit.Trip Fate: On WiiWare, Fate used the IR Pointer of the Wii Remote to aim. In place of that, this version uses the stylus. It works well, but it does mean you have to hold the 3DS with one hand, and it can become uncomfortable during the game’s rather long stages. The 3D effect is rather simple, placing the action in the back, with score and effects overlaid above it.

Bit.Trip Flux: Flux plays identically to Beat, but it is just a better game. The Slide Pad is still a bit too sensitive, but with checkpoints and more gameplay elements, it can be hypnotic.

Some of the games are better than others. For me, Flux and Runner are sublime experiences and Void is a fun distraction.

All the games retain the retro-charm of their individually released predecessors. The visuals are nostalgically cool. The sound effects are simple, but effective, and the music ranges from good to sublime. At its best, Bit.Trip Saga’s games blend visuals, sound, and gameplay in such a way that they are all a singular experience. 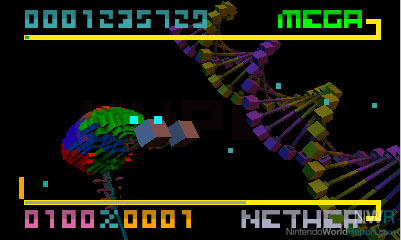 The 3D effect is the biggest improvement in the titles that comprise Saga, and it does add to a game that oozes retro charm. It really can make the rhythmic pulses of the sound and light more immersive. However, most of the games don’t make extensive use of 3D, and playing without isn’t a great loss. In some cases, especially in the visually busy Bit.Trip Runner, the 3D can have an adverse effect on the framerate.

While these games are mostly the same as their WiiWare predecessors, this 3DS release does bring them to a portable platform. I personally feel like this is the biggest advantage Saga has over the WiiWare titles or the Wii compilation. Some people might prefer to play these games on a large screen, but I find these simple but involving experiences perfectly suited to travel gameplay. Bit.Trip Saga is now a permanent resident of my 3DS travel kit.

So is Bit.Trip Saga worth picking up? If you already own the WiiWare titles the answer is probably no. The 3D effect does add to the game, but not so much that most people will feel like rebuying them. However, it does make a solid travel title for the 3DS. If you don’t own these games, as I didn’t prior to now, then yes. Each of the six titles is a charming experience, and while some are better than others the entire suite of games is worth experiencing.

Just got this on Amazon for $16. Never played the WiiWare versions. Looking forward to it.

I know that a couple of the games have framerate issues, but $5 for the full game is fantastic value.  I paid $10 and it felt like a steal... Bit.Trip Saga is easy to recommend when the cost of entry is this low. 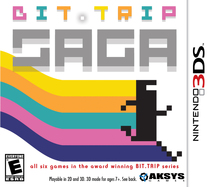