One Kirby is fun, but 10 of him are amazing.

Kirby Mass Attack is a peculiar DS game, but also one that is exemplary of the system's strengths and weaknesses. On one hand, it has a very interesting concept, amounting to some sort of side-scrolling Kirby-infused RTS with a load of content. On the other, it has some occasionally irritating touch screen controls that will make you want to snap your system in half. The key is that you never actually break your system in half, and you eventually fight through and forget those sour notes to get the pure unadulterated joy that is Kirby's DS swan song.

At first glance, it just looks a new Kirby side-scroller, but the gameplay is based entirely around using the touch screen to manipulate a group of up to 10 Kirbys through stages filled with obstacles and puzzles. For the most part, the controls work wonderfully, but there is a certain lack of precision with the stylus controls that is extremely frustrating, especially as you progress to the more challenging stages. You might have to guide the characters through a thin area, with any error leading to mass Kirby death. Moments like those become more of an exercise in futility than a challenge.

Fortunately, there are many more moments that are the polar opposite of that. The five worlds are varied, with different methods of play, a variety of different locales, and extraordinarily clever challenges. Most levels play out like typical linear side-scroller, but the game regularly throws optional paths and different goals to keep you on your toes. One level has you protecting baby birds so you can get them to their mom. Another has you controlling a mass of Kirbys riding a star like a surfboard. The basic gameplay is solid, and these changes of pace are just as good.

Outside of the main game, which can take a good deal of time by itself, there are also several mini-games that can be unlocked by collecting medals in each stage, which are sort of like the medals in New Super Mario Bros. These medals are generally not too hard to gather and the rewards are wonderful. There's a pinball game, a vertical shoot-'em-up, a cameo-filled rhythm-based RPG, and more. While some of the rewards devolve into typical gaming tropes (boss rush, sound test), the earlier ones are kind of surprising and shockingly good fun, almost like the mini-games in Super Mario 64 DS but more fully developed.

While I have my issues with the controls, Kirby Mass Attack is still a joy from start to finish. It might be frustrating, but it's worth the minor control annoyances to work through one of the last great games on the DS. If you loved Canvas Curse, you should get this game right now. It might not have the same mechanics as the early DS hit, but it has the same spirit.

I disliked Canvas Curse and I'm loving this one.  I do agree with the control issues though.  They're not major, but it's really, really annoying to be trying for a gold star on a level, just to have a mini-Kirby get crushed because he seemed to be in his own little world, away from the rest of the group...

I'm loving this game.  For me, the controls aren't a problem.  I think it's okay that I don't have perfect control over all the kirbies.


Like with the pikmin games, there's a special little art to coaxing that last guy into a spot where he doesn't get killed.  And with pikmin also, it's super easy to make a small mistake and have most of my guys die, but I just restart the level and try to not do that next time.


For me, if a game is a completely new experience both in gameplay and controls.  And if it's fun on top of that, the game has to be a 9.  Everyone wants nintendo games to control differently.  But I think to truely enjoy these games, it's best to give in.

With a little bit of tweaking to fit its micro-managing system, I can see this might have worked as a Pikmin game, what with the group dynamics, the enemies that your gang will swarm over and the areas where large-scale death is a serious possibility. I guess this makes the mystery of how Pikmin 3 on Wii U will play and control even more intriguing. 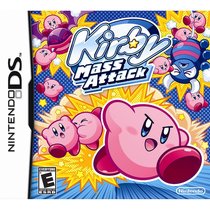