Does Tiger Woods plus The Masters equal win and awesome on the Wii?

Electronic Arts has found great success with the Tiger Woods franchise on the Wii. With the Wii version of the game providing some of the best golf experiences on the market, this success is well deserved. Although last year's version of Tiger Woods featured the Ryder Cup, this year EA went all out and for the first time in franchise history has included one of the most iconic tournaments in the golfing world, The Masters.

The presentation in Tiger Woods PGA Tour 12 is amazing. The inclusion of broadcasting icon Jim Nantz really brings a level of realism to the game, as Nantz is the prominent voice for various PGA tours and The Masters event itself. EA has also added some new gameplay modes with a focus on The Masters. The mode with the most depth is “Road to the Masters,” which is essentially a career mode. Starting out at the very bottom of the rankings, you work your way up from local charity events, to PGA Tours, and eventually make your way to the prestigious Masters tournament. In addition, in Road to the Masters, EA has added a mode called Masters Moments, which puts the player through nine classic moments in Masters history. After clearing each moment, players unlock sections of a gallery that give a behind the scenes look at the classic course at Augusta National and the Masters Tournament. It is very impressive and full of interesting information. EA has also included a mode called Tiger at the Masters, where the player tries to guide Tiger Woods to each of his four green jacket victories.

While the addition of The Masters was huge, EA still included several other new features in Tiger 12. The inclusion of the Caddie is perhaps one of the most welcome to the series. The caddie suggests shots and gives you general advice when playing a course. Long time players of the series might not need to use him very often, but players who are not familiar with golf or the game will find the caddie extremely useful. EA has also added a new Tee Placement option, which allows players to adjust the ball left or right within the boundaries of the tee marker. A new Practice Range also gives you the option to earn experience for your created golfer or to simply practice with any of the golfers in the game. The Practice Range includes a driving range, chipping green and putting green. Online play also makes a return this year giving players the option of competing in head to head play in traditional or disc golf, participate in live daily and weekly tournaments, and instant challenges where players receive challenges from other gamers while playing any of the offline game modes.

Visually, Tiger 12 is uneven. Most of the courses and locations are very nicely done, with lush grass and foliage. When you first start golfing on a course, the camera does a dramatic sweep in and really shows off just how good the locations appear on the Wii. During this theatrical sweep, there is the occasional stutter with the frame rate, however these are few and far between. The character models are a little bit underwhelming and have a last-generation feel to them. Overall, though, Tiger 12 is a decent looking Wii game.

Controls in this year's offering are solid. EA again gives gamers the option to use Wii Motion Plus to make Tiger 12 one of the most realistic golfing experiences on the market. The Wii Balance Board is also supported in this version as well, adding to the level of realism. On the Arcade difficulty level, gamers will earn points toward a power shot by keeping their balance steady. Using the Pro level, players will have to maintain balance in order to attain one hundred percent power with their swing. It is a great inclusion in the game and continues to show how EA is committed to making a great golfing experience on the Wii.

For gamers out there who are not so serious about golf, Tiger Woods 12 offers a plethora of party games. Most of the party games made appearances in previous Tiger games on the Wii, but that does not detract from how much fun they can be. Perhaps one of the most solid of these is Disc Golf. Originally introduced in Tiger Woods 10, Disc Golf is still one of the most fun parts of the game. The Disc Golf and other party games could almost be a separate game by themselves.

Tiger Woods PGA Tour 12 is a fantastic golf offering. The implementation of The Masters into the game is flawless and brings more realism to the overall package. While the visuals are not some of the best that you will find on the Wii, the game more than makes up for it in other areas. Other features, such as the new Tee Placement, Practice Range, online play, and a very helpful caddie you can call upon at will make this year's iteration a good choice for die hard golf fans or those that have skipped out on EA's golf outings for the past few years.

I likely will skip this year's game, as I'm content with TW 11. However, the Masters inclusion made my brother run out and buy it, despite having an untouched copy of TW 11. I know he's digging it a lot, especially with the nifty Chicken Stick accessory that is a regular golf club cut in half with a place to put the Wii Remote w/ MotionPlus on the bottom of the club. That accessory is boss as hell.

I have Tiger Woods 10, but skipped last year's version, so this sounds like a pretty big step up for me. I'm still recovering from a broken ankle, though, so standing up isn't the most comfortable thing for me to do right now. I'll probably pick this up in a few months.

Did a quick search for the Chicken Stick and it looks really nice. However, it costs $40, and that's a lot for an Wii remote accessory. 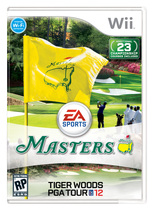