Samurai Warriors debuts on 3DS with additions and limitations.

While making the transition from the consoles to the 3DS has made Samurai Warriors: Chronicles a little bit lighter than its counterparts, the core gameplay and features that make it appealing in the first place are all still here. If you've never played a Samurai Warriors or Dynasty Warriors game, this one does a fairly good job of explaining all of the different aspects in the first mission. Essentially a hack-and-slash, Samurai Warriors has some strategy components, including the ability to switch to different heroes on the map, choosing routes for computer-controlled characters, and a morale system that dictates how enemies react once an objective is completed or failed.

That said, this is still a game that is very much about button mashing and comboing stuff together to get the maximum amount of damage output possible. This turns off a lot of people from the Warriors games due to the repetition, but there is something satisfying about how simple it plays. On the battlefield, you move one of the characters under you control around the map clearing out enemies, fighting bosses, and opening new paths for other characters to get around. Each hero unit plays a bit different, but you're executing the same basic attacks with minor differences. What really sets them apart are the Musou attacks, super moves that use up a meter built up from fighting or charging it up manually.

Despite having the warring states period as a backdrop, the story of Samurai Warriors: Chronicles isn't exactly historically accurate, with most of what's going on being based around your created character and the choices you make throughout the game. There's a fair amount of dialogue options that will affect how the story progresses, but ultimately, I've never been very interested in the Warriors games on that level and generally skip most of it. It's strange that the developers don't really try to be more silly and over-the-top in the character interactions, and the overall seriousness of the writing conflicts with the fundamental ideas of the series.

In terms of utilizing the 3D of the Nintendo 3DS hardware, Samurai Warriors does a pretty good job of giving the battlefield depth and making the characters and HUD stand out. In fact, it's probably one of the better uses of 3D I've seen in the launch titles, and while the overall game isn't exactly a looker, it manages to look clean and run fairly smooth. The hero units are much more detailed than the infantry, which is to be expected, but there is quite a large discrepancy between the two in quality. With less horsepower, there aren't nearly as many enemies too, meaning that it loses some of that epic feeling the Warriors games usually have.

One of the best things about the move to the 3DS is the touch screen. Not only is your map on the bottom screen, giving you access to everything that's going on with a quick glance, but you can also change characters just by tapping on their icons, making it a whole lot easier to micro-manage your battles. The Circle Pad is an excellent upgrade to the D-pad, as the latter functions as the ability to use items. Other 3DS-only features include SpotPass, which allows you access to new side-story maps, and StreetPass, which lets you set up an army of characters you get through the campaign and have encounters with other 3DS gamers, as well as the ability to trade and receive gear for your characters.

Samurai Warriors: Chronicles does not bring a lot of big changes to the core gameplay, but the extra features and tweaks make it a worthwhile purchase for fans of the series, as well as someone who has never even played a Warriors game before. As a launch title it certainly is one of the more appealing games, especially since it's really the only action game out of the bunch. Even with the smaller scale battles, Chronicles still manages to offer a nice taste of the hack-and-slash gameplay on the go, and it utilizes the hardware well enough to recommend as a solid 3DS game.

This sounds interesting, and seems like the kind of game where if I wait 6 months I'll be able to get it for under $10.

I think it avoids a lot of the repetition that I felt with DW games like DW Gundam by not forcing you to kill regular grunts to reach the officers and guards, they're always on the battlefield and you just have to get to them (which can be very dangerous if they're deep in an enemy morale zone). Also the four characters you control let you jump to the interesting places on the battlefield without much running and prevent the escort mission problem of losing the game if an uncontrollable AI character dies, the guys you have to protect are controllable (there are some optional side missions with uncontrollable escorts but they don't make you lose the game).

Nintendo’s web site says that Samurai Warriors Chronicles allows for 2 players online. "The game will also feature online co-op, so friends can pair up and take on enemy forces together. Co-op battles will offer higher degrees of challenge, but will also yield bigger spoils from victory.” The reason that I am buying this game is because it has online co-op. However, everywhere else that I check, calling Nintendo, looking at previews and reviews of the game, never mentions a multiplayer mode. Does Samurai Warriors Chronicles have Online and/or Local co-op? Thank you.

No. The most it has is street pass duels which are similar to the SFIV figure battles, i.e. no real multiplayer gameplay. I have no idea what made Nintendo think that. Nothing on the box claims that there's online MP.

There are people that think it was meant to be included at launch but wasn't, and in my review copy sheet it only mentions StreetPass. It's probably just some bad info that wasn't under control.

Yeah, I guess axing it to get the game out for launch is a plausible explanation. It still feels very polished for a launch game and knowing Koei there will be more Musou games for the system later on, most likely we'll see online in those.

I definitely love it. It has a lot of levels and game play, (which games today don’t seem to have any more). (Since this is my first Samurai Warriors game), it's also great I can name and change my character's appearance, (not a lot but I still can). The controls are a little repetitive, but that doesn't bother me, (gives me a chance to feel like I'm watching and controlling a small movie instead of playing a game). Overall it is a great game and I'm very happy I got it. 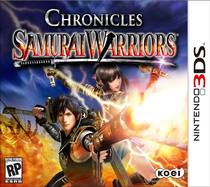