Bust-A-Move is fun and all, but something about this retail release screams "highway robbery."

Bust-A-Move, also known as Puzzle Bobble, is a puzzle game where you have to shoot different colored bubbles from the bottom of the screen to match three bubbles of the same color, which then removes the bubbles from the board. The game has always been fun. There's a good deal of strategy involved as you can bounce the bubbles off of the walls, and you slowly earn special shots that give you the ability to blow up bubbles or change their colors.

It's entertaining, but as a retail release, it feels very lacking. It has a feature set on par with DSiWare versions of games such as Dr. Mario and Puzzle League, and the added 3D seems pointless. Aside from that, it doesn't make use of any other new aspect of the 3DS. Also, the interface is clunky, and at times, the controls feel sluggish. There are no touch controls.

Bust-A-Move Universe is a great puzzle game, but unless you're a big fan of the series or a die-hard puzzle fanatic, this is a senseless purchase. You can find similar games online for free or, inevitably, for much cheaper on the 3DS download platforms (when they launch). Still, you can't deny the fact that Bust-A-Move is fun. I just wish that this didn't feel like such a cheap cash-in.

I actually like this so far. I haven't played BaM in a while (since N64), so it's fresher to me.

It would be better to get Space Bust-A-Move it's $10 or more dollars less, has local and online multiplayer and works on the 3DS!

I actually bought this.  It was only $30 as to 40 and a puzzle game is always needed on a enw handheld.  I agree with your criticism but I think you were a little to harsh.  My main criticism would be its lack of multiplayer.  I actually find its 3D the least abrasive of all the games I got. 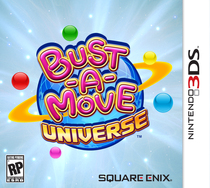