These LEGOs have depth, man.

LEGO Star Wars III, based off of the CG-animated Clone Wars show currently running on Cartoon Network, is clearly the Nintendo DS version ported over to 3DS with 3D effects and a StreetPass option. That's not a bad thing, as the basic game is good in the same way all the LEGO games have merit. It's a fun beat-'em-up with some puzzles, lots of unlocks, and a good sense of humor.

The story won't make too much sense if you don't watch the TV show, but basically all you need to know is that there is a war going on, and you have to solve puzzles and beat up villains to win it. It's lacking a crucial part of what makes the other LEGO Star Wars games work so well: nostalgia and familiarity with the plot. So while it might be funny to see a droid fall over, when the story doesn't resonate with you, you lose a good deal of the LEGO charm.

You go through various levels switching through an assortment of characters ranging from Anakin and Obi-Wan to Clone Troopers and Droids. Each character type has a special ability. Jedi can use the Force, Clone Troopers can grapple and/or use explosives, and Droids can hover and hack computers. The puzzles aren't that tricky, but each level makes good use of all the characters in your party.

The levels are extremely long, sometimes lasting around 30 minutes. There is, sadly, no way to save in the middle of a level, which makes this portable game not that portable. The levels are even broken up into acts, splitting each level into an ideal save spot, but alas, you can't save.

Occasionally, you'll find yourself in a space combat level. The segments are usually short and simple, kind of like a Rogue Squadron lite, but it's a nice diversion from the usual gameplay.

In addition to the Story aspect of each level, you can play them all in Free Play once you beat them once. This is required if you want to collect everything, as sometimes you need to go in with a different character to collect something in the level. There are oodles of unlockables in the game, including numerous characters and a variety of mini-games, such as Droid Volleyball and Snowball Fight.

Aside from the Circle Pad, which makes player control smooth, the 3DS-exclusive aspects of the game don't add much of anything. Sure, the 3D effect is cool, but outside of the cut scenes, which look awesome in 3D, the regular gameplay doesn't benefit much from it. I didn't get any added sense of depth, and most of the time I just turned it off. The StreetPass feature just lets you collect more studs, and you can use Play Coins to unlock things, all of which you can unlock without them.

LEGO Star Wars III is a quality title that doesn't gain much from being on the 3DS. Still, it is a good game packed with content. If you're a fan of LEGO games and/or Star Wars, this game is most definitely worth your time and money.

Wii. Or better, even.

It's based off of the DS version, and it runs smoothly. Is it spectacular? No, but it gets the job done. That's why it wasn't brought up in the review.

So if I walk a lot, I can unlock things I'm not a good enough player to unlock in the game? Nintendo may be on to something here...

Anyone know how the 3DS version compares to the console (actually, PS3) version in terms of content? Does the portable have the same number of levels or only a subset? 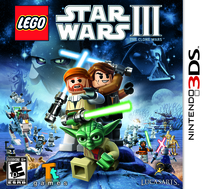