The PopCap legend finally spreads its roots over to DS, but is the grass any greener?

Plants vs. Zombies has been available on numerous platforms for almost two years now. The game, from PopCap, offers a twist on the popular tower defense genre by providing five static rows representing a backyard. As zombies traverse these rows, you place various plants into the ground to attack the zombies and stop them in their tracks so that they don't cross all the way across your lawn and eat your brains. 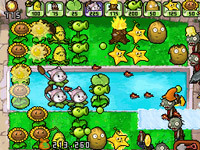 On the DS, the game plays exactly the same as it has on any other platform. Better, in fact, than on the PC and Mac due to the stylus-based touch interface. Truly, this is a game that is suited to touch controls better than most. Using the stylus to collect sunlight, which act as resources needed to plant the plants, and drag-and-drop plants into the ground works like a dream, and allows for quick reflexes to save the day. Given how many things are happening on the screen at any given time, this is an impressive feat.

Unfortunately, the graphics don't fare as well in the transition to Nintendo's handheld. On all of the other platforms, the game is known for a colorful and smooth animated style in which the plants dance back and forth with glee, and the zombies lumber across the play field gracefully. With reduced processing power, the Nintendo DS reduces these animations to a handful of frames each, making the graphics feel stilted if you are familiar and used to the other versions of the game.  Luckily, the visual changes are consistent across the entire game, meaning that it doesn't take too long to adjust to the lower framerate. After a few stages, I was more or less accustomed to the change in visual fidelity and it became a non-issue for the rest of my time with the game. 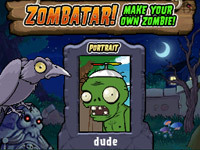 The audio presentation is identical to its brethren, and that's a good thing. The songs in the game are catchy and upbeat, and vary from stage to stage. The "BRAINS!" sound effect that comes from the Zombies as they tread across your lawn is clear (and hilarious) and helps you buy into the overall package of charm that the game brings. Also included in the game is the end credits music video, a nice bonus feature that ties the whole package together. The video is fairly heavily compressed, but it still sounds great on the DS speaker.

The main campaign features 50 stages, each of which gets slightly more complicated as you are presented with more and more weaponry to fend off more and more different types of zombies. Most stages offer a reward of a new type of plant you can use in future stages, and after you accumulate more than a certain number of plants, you are forced to make difficult choices as to which plants you bring into battle. This bit of strategy becomes crucial once you start coming across zombies that can bypass most of your traditional defense.  On your first playthrough, the levels can be quite difficult. Subsequent playthroughs (this was my third) will reveal specific strategies that seem to work in almost any scenario, but that doesn't really make the game less fun. 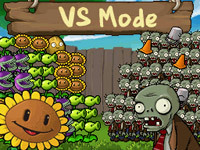 As you play through the campaign, you will unlock plenty of bonus features, including two different puzzle modes, and almost two dozen mini-games. You continue to earn money in these modes that can be used to unlock additional items and benefits such as additional inventory slots. One of the more interesting unlockable features is the Zen Garden, a personal playground where you can raise new plants and earn money by taking care of them. It's an interesting mode, completely different from anything else in the game.

Also included are 11 different variants on Survival mode, which lets you play as long as you can withstand the zombie hoard.  There is no online interaction to speak of, so you won't be competing against any of your friends directly, unfortunately. 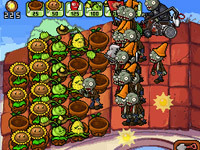 There is both single and multi-card multiplayer, with slightly different features amongst them. I was unable to try out the multi-card multiplayer, but the single-card multiplayer worked great, allowing both of us to play a variety of matches.  Custom mode allows each player (no more than two) to pick up to five plants or zombies, and then play against each other. Random mode makes the plants/zombies selection automatically, and quick play sets each player with a pre-selected arsenal. The single-card multiplayer was somewhat laggy, but after a few minutes, the game began and ran great. Having so many options without needing two copies of the game is a real bonus.

In all, Plants vs. Zombies is a fantastic handheld game, and well suited to the Nintendo DS. Unfortunately, superior versions of the game are available for much cheaper on almost every other platform, making the DS version a hard sell. That doesn't affect the product itself, however, which is a great package. There's a reason this game has been released on every platform: it's a great game and would be at home in any DS owner's library.