Tron Evolution, developed by n-Space, is the DS entry of the movie-based Tron games that came out alongside Tron Legacy late last year. It's an entertaining game, with simple, fun gameplay involving both the stylus and buttons at the same time, and a good amount of multiplayer modes. The question is whether or not this game ascends past the usual licensed game tropes. In some respects, it does, and in others, it doesn't.

All of the Tron Evolution games have stories that add to mythos of Tron, specifically focusing on what happened in between the original film and Legacy. The DS version, unfortunately, is rather hard to follow, making it unclear exactly when it takes place. The story is told very poorly. While I recognized the familiar characters such as Tron and Quorra, the plot made little sense to me, and I am actually interested in the story of the Tron universe.

The basic gameplay involves you, playing as a System Monitor trying to fix problems in the Grid, traversing around environments fighting enemies and solving puzzles. The controls use the touch screen and buttons in tandem; the character is controlled by the D-pad (or face buttons if you're a lefty), and you interact with the environment and combat foes using the touch screen. It's reminiscent of the typical first-person shooter controls for DS, but because the action in this game is slower, it doesn't cramp your hand as much.

Combat is simple, involving a variety of taps and swipes on the touch screen to use the Identity Disc (a Tron staple) to defeat enemies. Sadly, it always boils down to madly swiping the touch screen to defeat the foes around you. You can also use special abilities that are activated by holding the L or R button and then drawing a line or tapping on the touch screen. These can be used in combat, as well as in puzzle solving, and they range from a guided disc that works similarly to Link's boomerang in the two DS Zelda games to a bomb disc that can be used to blow up doors or hit multiple enemies at once.

The puzzle solving is straightforward, but it never really elevates to anything more than timed execution of simple tasks. The puzzles involve tasks such as "find a way to change your character's color to purple so he can use his disc to hit the purple switch." It's not bad per say, but it gets boring before long. It also doesn't help that the game spells out every task you have to perform.

Where the main game succeeds is when it brings the Grid Games into play. Occasionally, you'll participate in one of three modes. There's the lightcycle one where you have to try to get your opponents to crash into the stream of light behind you. The tank mode is reminiscent of the Tanks mode in Wii Play, and has several power-ups in it that make it more interesting as you try to defeat the other tanks on the map. The Recognizer racing mode puts you in a first-person perspective as you try to navigate a corridor while collecting points and changing the environment by tapping icons on the touch screen.

Those three modes, and an additional one that use the main game's control in arena combat, are all playable in multi-card multiplayer. They aren't playable online or through any kind of single-card manner, meaning, the chances of you ever playing those in multiplayer are slim to none. You can, however, play against bots which is a small consolation.

Tron Evolution is a serviceable licensed game that doesn't do anything bad, but it also doesn't do anything great. The short adventure will likely entertain fans of the franchise, but outside of that, it's not worth playing. The only thing giving it any longevity or reason for non-Tron fans to play the game is its multiplayer, which unfortunately lacks single-card and online play.

The lightcycles, with classic control options enabled, was about the only thing fun about the game. Even then, it was probably one of the worst lightcycle games I've ever played. It didn't feel right at all. I'd much rather have a nice port of GL-Tron or ArmageTron... even the lightcycles from Tron 2.0 felt better. 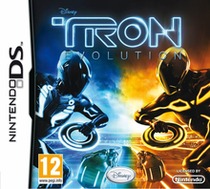