The WiiWare service has certainly seen more than its fair share of puzzle games, and while it may be easy to dismiss Legendo’s Ghost Mania as just another bland puzzle game, many could be surprised to hear that this spooky falling block game is one of the best of its genre on the WiiWare service.

Ghost Mania tells the tale of Becky and Tim, a pair of ghost guardians who have become unemployed due to letting all of the ghosts out of the Spirit World by accident. As a result, Becky and Tim have been banished until the ghosts have been recaptured.

Ghost Mania is a falling block puzzle game in which players must rack up points by eliminating blocks from the playing field. Each match begins with a handful of blocks present on the bottom of the screen, and as time passes, more will rise upwards from the bottom. Blocks fall from the top of the screen to be matched up with the appropriate colors on the bottom. 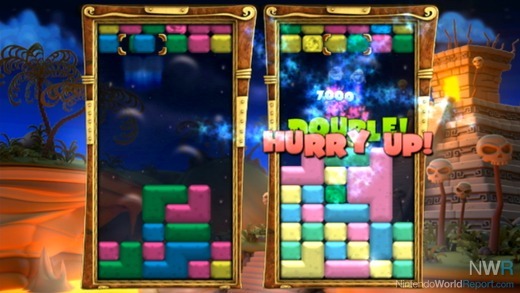 The core concept is deceptively simple. The goal of the game is to eliminate glowing ‘ghost blocks’ from the playing screen. The ghost blocks remove other ones from play. So, in other words, in order to remove blocks, you must connect at least two of the same color, with one of them being a flashing 'ghost block.' The more blocks you line up, the larger the amount of points you will receive.

There are four different modes of play in Ghost Mania: Arcade, Puzzle, Endless, and Party. The Arcade mode is by far the most fast-paced of the bunch, as players must continue clearing ghosts until the ghost tank on the right of the screen is full. The target score constantly increases as players progress through the various stages present in this mode, creating a steady difficulty curve.

The Puzzle mode plays quite differently from the Arcade mode as players are required to think carefully through each level. The game presents players with a limited number of turns in order to clear all of the colored blocks from the playing field. Though this mode may not be for everyone, as it proves to be quite more challenging than the game’s other modes, it does, however, provide a break from the rapid gameplay of the Arcade mode. 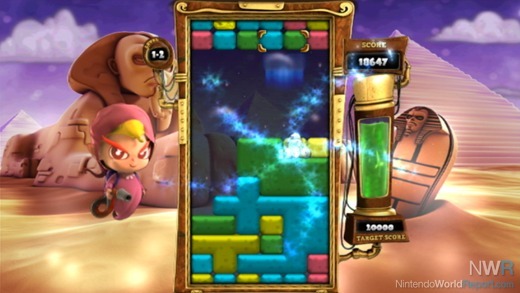 Endless Mode and Party Mode are pretty self-explanatory. The former throws gamers into an endless match where the goal is to rack up the highest score possible. The speed of the blocks will eventually rise, making things tougher and tougher as time progresses. Party Mode offers three different modes of play to compete against a friend in, including Battle Mode (clear blocks to fill up the opponent area), Enduro Mode (stay in the game longer than your opponent), and Ghost Mode (remove all of the blocks and ghosts from the playing field faster than your opponent).

Ghost Mania offers gamers a fair amount of content on WiiWare. Although it would have been nice to have seen some online implementation, whether it be leaderboards or multiplayer, Still, for the price at which the game is being sold for, Ghost Mania offers enough content to offset its shortcomings. 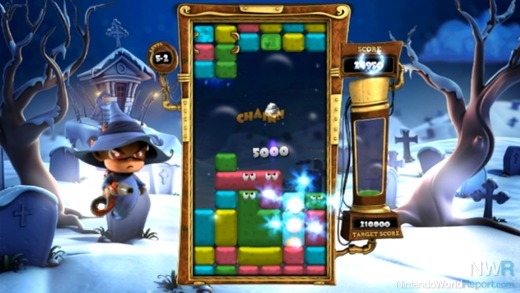 From a visual perspective, Ghost Mania has a very polished look to it. The graphics have a very refined look to them, and it tries to keep its environments varied by taking players to different locales, such as the arctic and deserts. The menus are very easy to navigate and the background music fits the game very well. In short, Ghost Mania impresses in many different departments.

Ghost Mania is a fun, challenging, and well-developed puzzle game. For 500 Wii Points, gamers get one of the best falling block games on the WiiWare service. It may not be the most original, as it borrows heavily from the Tetris formula, but it sure is a whole lot of fun.