Pick up your stylus and let your imagination take control.

Art Academy was first released on DSiWare last year when two versions of the game were released at a premium 800 DSi Point ($8) price tag. While the debut game in the series was met with positive reception, the sophomore release was met with some criticism for being too similar to its predecessor. Art Academy's retail outing may fall in that same boat as well, but due to the larger number of lessons and activities, it makes the retail release seem like a better value than its digital counterparts.

First and foremost, Art Academy is not your traditional video game. In fact, the best way to describe it is as the art edition of Brain Age. There are no goals or levels to beat - instead it is just you and your tools making use of opportunity to express yourself in whatever way you feel fit.

Chances are that if you have played the DSiWare versions of Art Academy that you have a good idea of what the series has to offer. In short, the game teaches you how to become an artist through lessons and mini-lessons. These lessons touch upon different tools and techniques, as well as provide expert advice in order to maximize the quality of your creations. The retail release features ten main lessons, the same amount as both of the DSiWare versions combined.

The lessons are step-by-step guides that teach you how to draw and paint, helping develop skills by practicing them in different scenarios. One of the lessons will have you drawing an apple, while another will have you creating different shades of blue to color in waves. The mini-lessons take the concepts the player learned in the main lessons and take them a step further by presenting players with challenges that will test them on different skills.

The lessons are not mandatory to complete. In fact, the game encourages players to jump into the free paint mode right from the start. As the title of the mode suggests, players can do whatever their heart desires here. The only limit to their creations is their imagination.

Art Academy is a great place for people to start if they have always wanted to learn how to draw.  The game features a wide array of pencils and brushes that help make creating art simple, as well as a palette that allows players to create any color imaginable. The game is not meant to replace the traditional means of art, but rather to provide newcomers with a basis to become interested in art.

Art Academy can be played on any model of the Nintendo DS system, unlike the first and second semesters, which were only available via download on DSiWare. The retail version has special features that take advantage of the DSi's capabilities, though they don’t add much. The most notable of the features is the ability to snap a photo of something and display it on the upper screen as a guide.

Art Academy's soundtrack is best described as elevator music. Most of the tracks are serene pieces designed to create a relaxing feel. It works for the most part, though more dynamic people will likely want to turn the volume off and listen to their own music.

Art Academy is great piece of software that is well worth your time and money, provided you don’t have access to cheaper and basically identical DSiWare apps.. My only gripe about the game is that you cannot export your photos, which may be enough to turn some people off from enrolling. Still, at a budget price, Art Academy is a delightful title for the artistically inclined.

Does this game qualify for club nintendo registration? This game seems like a fun relaxing thing to just draw with and have fun without much purpose of 'winning' which is cool because I do enjoy to draw. I think getting coins will be something that draws me into buying especially for a cheap price

It's a first party game, so I assume it qualifies. 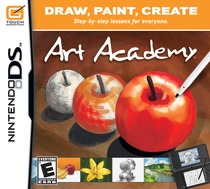