It's the wonderful world of Sonic Colors!

2010 has been a good year for Sega's blue hedgehog. Despite the flawed performance of Sonic Free Riders on the Kinect, this year's crop of Sonic titles have been very good, especially when compared to previous outings. Sonic and Sega All-Stars Racing was an enjoyable kart-racing game, and Sonic the Hedgehog 4: Episode 1 was a promising beginning for a new kind of classic Sonic gameplay. Now we have Sonic Colors for the Wii, which is the latest game 3D Sonic game. It takes everything that was fun from previous titles and multiplies them, creating one really enjoyable experience with very few bumps on the road.

The story behind Sonic Colors is that Dr. Eggman has built an outer space theme park with seemingly innocent intentions. When Sonic and Tails infiltrate the facilities, they learn that, in actuality, Eggman has captured an alien race called the Wisps and is harvesting their powers to create a ray gun that will control the galaxy. The stories in Sonic games have never been strong, and Sonic Colors is no exception. Regardless, it's a fun one to see for the sole reason that it's very wacky and doesn't take itself seriously. There are plenty of puns, smack talk, and silly situations in a story that is very similar to the classic Sonic cartoons. Your mileage may vary, though, but after all the melodrama of previous Sonic titles, it is good to see Sega lighten up a little.

Sonic Colors consists of just Sonic platforming stages, and they are sweet to see. They play very similarly to the daytime stages in Sonic Unleashed, which were the highlight of that game. The camera switches between 2D and 3D planes, combining classic and modern Sonic gameplay in a mashup that truly is the best of two worlds.

My favorite part of the whole experience is easily the stages themselves. These are some of the most creative and colorful stages ever presented in a 3D Sonic title. The variety is amazing, featuring everything from low gravity roller coasters in outer space to lush forests fused with Eggman's expanding machine empire. Even when some of these stages get difficult, you will be amazed at how ingenious some of them can be.

One important element introduced in Sonic Colors is the Wisps, who are the aliens Sonic must save from Eggman's wrath. Each color alien gives Sonic a different power, such as floating abilities, super speed, the ability to turn blue coins into blocks and more. I admit that I was worried that the Wisps would get in the way of Sonic's speedy gameplay, much like the Werehog did in Unleashed and the sword in Sonic and the Black Knight, but they are very well implemented into the gameplay without overstaying their welcome and obstructing gameplay. You are even given the option to play levels using different Wisps to find alternate paths, or complete the level without even using them if you wish.

Sonic Colors has a lot of replay value. Each world has more than six stages and a boss battle at the end. As you liberate new Wisps, you can use their abilities to unlock new paths and bonus content, adding more to the game. The stages are also home to red coins, which are basically Sonic's answer to Mario's red coin challenge in New Super Mario Bros. When you collect these coins you unlock new content, such as new levels in Sonic Sim, an arcade game mode where you play as a robotic Sonic. A second player can join in and take control of a red Robot Sonic, opening up the levels to cooperation or competition. You can unlock new stages as well as playable characters, such as the Mii costume. This is easier said than done, though, as the coins are cleverly hidden, and you must use the Wisps to uncover them.

There are very few negative points to mention about Sonic Colors, but there are a few nonetheless. As is common in most Sonic games, Sonic Colors features many moments of trial and error where you will fall to your death because you didn't see a platform or an enemy to bounce off of. But the gameplay isn't as frustrating as enemies are easier to spot and the game will even alert you to upcoming danger. Sonic is also a bit hard to control during the 3D portions of the stages, at times missing a jump even when you pressed the A button. Finally, some Wisp powers are also pretty superfluous and barely get any use in the game.

When it comes to graphical design, Sonic Colors certainly lives up to its name. As previously stated, the levels are gorgeous in their design. Frame rate barely drops, even when Sonic is running at full speed and there are a lot of enemies on-screen. The cut scenes are beautifully rendered as well, featuring great character animation and direction, even if the story is silly.

Both Sonic and Tails have received new voices and they are quite good. Sonic's voice sounds much lower while Tails manages to sound young without being grating. The music is classic modern Sonic, but it also features the orchestral sounds seen in Sonic Unleashed. The stage themes are varied and feature the classic Sonic sounds we have grown accustomed to. The opening theme song, "Reach for the Stars" by Cash Cash, is memorable in that pop-rock manner that has distinguished the Sonic franchise for a while now. However, if you weren't a fan of these songs before Sonic Colors, "Reach for the Stars" will do very little to convince you otherwise.

Sonic Colors is one of the best Sonic 3D titles since he made the leap to 3D in Sonic Adventure in 1999. It does away with additional playable characters and gimmicks, instead focusing on refining the classic Sonic gameplay while adding a few twists of its own. Issues aside, Sonic Colors is a triumph and worth checking out. 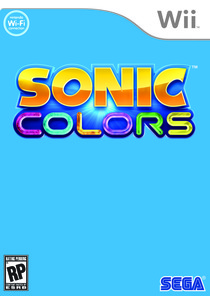