This time, the prank's on you.

A bucket of water poised menacingly above the door, once triggered, will fall and bathe its target in an icy, unexpected wash of embarrassment. This prank and most others involve elements of surprise and shame. Players who purchase Oops! Prank Party are in for quite the prank, but as you may have guessed, not in the way the developers may have intended.

What Prank Party thinks is a grin, is actually an uncomfortable grimace. The game revolves around a collection of mini-games, with players facing off against one another in an effort to out-prank their competitors. Now, what the game considers a prank is that the in-game avatar of the loser will possibly have to wear a silly costume. That is it, the core concept of Oops! Prank Party is that your character may have to wear a kimono, or a chicken suit. As one can imagine, this is a poor motivator to act as the game's driving force.

Oops! Prank Party offers up several modes in which to play its 100 mini-games. Players can face off in a series of games against an AI 'game master', or play with up to three friends in the free mode and the board mode. None of these modes feel very robust, with the free mode and game master challenges just being slightly different ways to get to the same games. Board game mode comes the closest to feeling like an enjoyable party game experience, but the boards are so bland, and so much is left up to chance that it is easy to lose interest. Imagine the look on a friend's face then, as they attempt to enjoy a game of Oops! Prank Party with you. You have just finished a series of minigames, the first one involving shaking the Wii Remote violently to eat corn rapidly, but they unfairly lost because their motions weren't detected properly, and the second involving picking a chair at random, with the winner being the person who chose the "correct" chair. Unsurprisingly, your guest is not amused when their character is then forced to wear a purple leotard. Not only have they been punished for the game's bad motion detection or elementary-school level of game design, they now have to suffer the tedium of having the game laugh at the "prank" happening on screen.

Indeed, Oops! Prank Party feels as if it were manufactured to convince the player that what he or she is experiencing is fun. Mind you, many games go about this simply by actually being an enjoyable experience. Instead, Prank Party feels like a bad sitcom, using cheesy music and a seemingly unending laugh track to constantly reinforce the idea that there's no way someone could play this game without grinning from ear to ear.

"One more game," I said, "I have to review this, you know." The third game in the series revolved around picking a diving board, with the winner being the person who chose the "correct" diving board. Sound familiar? In fact, most mini-games are replicated multiple times within Prank Party, one particular game type recurs no less than six times, and they're often something you wouldn't want to experience again in the first place. This is partially due to the flawed controls.

In games that require the player to perform a repetitive motion rapidly, there is often difficulty detecting the player's movements. Some games are centered around timing, but don't have a consistent feel for when or what motion it takes to perform the necessary action, and do not let the player practice before a mini-game that hinges on the perfectly timed use of said action. One game feels as if there is no connection between the player's input and what happens on screen, and oddly enough the game's description reads, "The controls are a little tricky, but give it your best!" The repetition across game types only serves to highlight the recurring flaws with each of the mini-games.

To use another analogy, playing Prank Party with multiple players is akin to listening to a family member at the Thanksgiving table tell a horrible story that only they find hilarious, while everyone else in the room cringes as they detail the mishaps of their most recent colonoscopy.

There is no meta game surrounding Prank Party's minigames, there are no real goals to work towards, and by and large the games are either broken, boring, or both. The game itself seems like more of a prank, or just a severe miscalculation of what the gaming populace would actually enjoy. Oops!

I've only played the demo of this and it was awful. Boring as all hell. Seriously, whoever thought that a party game should take place in a white studio should be shot. And the prank thing? RIDICULOUS. I mean, I would personally love to put on those silly outfits! Worse is that Hudson designed these new Miis because Nintendo wouldn't allow their Miis to take that kind of punishment.

i loved reading that review.  thanks, nathan!

So this is what Hudson has to show after nearly 4 years without a new Mario Party?

So this is what Hudson has to show after nearly 4 years without a new Mario Party?

Remember, the Mario Party team moved away from Hudson and went on to create Wii Party. This was likely done by the Z team or something like that.

Is that true? Hudson no longer has the people who made Mario Party games? If so, that would explain a lot. It's a shame to see the company go from basically creating a whole genre to now releasing the worst games in it (which is really saying something).

It's a shame to see the company go from basically creating a whole genre to now releasing the worst games in it (which is really saying something).

As someone that loves board games, it also makes me sad to see this genre go down the tubes. I love that video board games afford you the opportunity to have elaborate setups without any physical hassle, and also allow for mini games to be inserted within the larger board game. Of course with Oops! Prank Party, the mini games are the center of attention.

Having the mini games brought to the forefront, and downplaying the board game element is the exact opposite direction developers should be going in.

Considering how many families own DSes for their children, and a Wii for home, I would love to have a board game that uses the DS to allow you to play games that require secrecy (Catan, Clue, etc.) This happened almost instantaneously on the iPad with Scrabble and the iPhone/iPod Touch connectivity, why can't Nintendo follow suit?

I also like board game video games. I know some people complain about how slow they are and how much luck is involved, but, well, it's a mopping board game! Who told you it was anything else? It's like these people never played Monopoly, which is a lot of luck of the dice roll, and takes so long to finish a game that I've never played one to the end. I shamelessly own all eight Mario Party games and even more shamelessly enjoyed each one, I still haven't played a better board/minigame collection and I'm sad that we may not see a Mario Party 9. If they based it on the Motion Plus, there are a lot of inventive minigames yet to be created. But sadly, the genre has become the cash-in genre due to the whole "casual/non-game" craze, so I have my doubts it will ever return to its former glory.

Have either of you tried Dokapon Kingdom?


It isn't a minigame compilation, and is very different from something like Mario Party where mini-games dominate the experience.  So comparisons to Oops! or Mario Party or other games that rely mini-games to provide enjoyment and interaction aren't really accurate.


Instead, Dokapon Kingdom focuses on mixing roll-and-move board game trappings with light RPG elements.  The video game reminds me vaguely of Talisman if that means anything... although there are enough differences that some people will disagree.  Roll, move your character along one of several paths, then take an action on the space where you land.  Build up your character (changing between several classes along the way), take control of and develop towns on the board, run errands for the king to earn large rewards, and take part in battles that use a rock-paper-scissor decision process.  Most importantly, you are given plenty of opportunities to grief the other players along the way.  Beat them in battle and you can steal gold or items, take the deed for one of their towns, or even change their name and haircut.


Dokapon Kingdom is not a game for everyone, but anyone who enjoys board games should give it a shot.  The randomness may seem painful early on... but you are given enough choices that things usually work out for the best players over time.  (Note that it's a very long game.  Don't panic or get upset if you are losing badly early on, because things can and will change if you are making good decisions.)

Have either of you tried Dokapon Kingdom?

I have, and I avoided the game because I knew that thematically it wouldn't appeal to my friends or family, believe it or not some people are disinterested by the traditional Atlus art style.

Is that true? Hudson no longer has the people who made Mario Party games? If so, that would explain a lot. It's a shame to see the company go from basically creating a whole genre to now releasing the worst games in it (which is really saying something).

I thought that was pretty common knowledge by now. But yeah, in an Iwata Asks interview about Wii Party, they said that Nintendo absorbed a great deal of the team which went on to create Wii Party. If you play the game you will see the similarities between it and Mario Party.

Common knowledge among whom? I don't really follow the business side of things, and I don't recall hearing anyone mention it in passing.

I've heard of Dokapon Kingdom and it looks interesting, but it doesn't seem like the kind of game that anyone I know could get into. I might still try it out someday, though.

I've heard of Dokapon Kingdom and it looks interesting, but it doesn't seem like the kind of game that anyone I know could get into. I might still try it out someday, though.

I said as much in my comment, but you also mentioning it makes me realize it is the kind of game I could probably try out at an E3 or PAX like event. 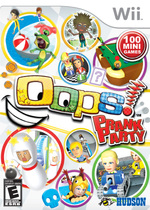