Maybe Sonic is too fast for his own good.

Sonic Colors for DS is basically the latest entry in the Sonic Rush franchise, meaning it's a straight-up 2D Sonic platformer. This iteration adds a Super Mario Galaxy-esque vibe and cool new power-ups, but it still has the same conflicting gameplay that litters the franchise.

Naturally, I'm referring to the prevailing issue that Sonic is all about speed, but the levels are designed with so many pitfalls where you either literally fall into a pit or run into an enemy who seems to appear out of thin air. In the earlier levels, this issue doesn't show up, but the lackluster design seems to be how the game measures difficulty. So you have two options: run fast and risk a trial-and-error death, or take your time and make the game boring and slow-paced.

Sonic Colors does add some cool new power-ups in the forms of Wisps, though. These alien life forms grant you different abilities, such as rocketing straight up and floating down, or turning into a fireball and bouncing in the air. They're sadly limited to certain sections of levels, but they're also some of the best parts of the game. However, it's puzzling because a basic run-through of the game requires almost no use of the Wisp powers aside from a boost power you permanently have. Instead, the power-ups are only need to get the medals hidden in each stage.

There are also missions that charge you with different timed tasks involving Sonic's stupid friends. They're ok, but suffer from the same problems as the rest of the game. The special stages, which help you acquire the Chaos Emeralds, use the stylus. They're a bit easy, but very fun. Lastly, the bosses are generally good and entertaining to fight.

The soundtrack features a mix of the usual Sonic music and a few orchestral pieces that are reminiscent of Super Mario Galaxy. The space theme perpetuates the minor Galaxy comparison even further.

Despite the good presentation and fun aspects of the game, the underlying poor design dirties up the game. You can work around it, but it's a chore to do so. For Sonic fans, Sonic Colors stands tall next to the Sonic Rush games, but for people who have long been critical of the series' design, this entry will not change your mind.

While I personally don't like posting impressions before my review, I'll make an exception for Sonic Colors Wii.  I am really enjoying this title, more than I expected even. Despite hearing the good impressions and reviews, I was very cautious as I am with Sonic games. Right out of the gate, Sonic Colors impressed me. Not only is the stage design breathtakingly beautiful, the gameplay is very fun. It's basically all of the day time stages in Unleashed all rolled into one.

Regarding the problem with running and dying, I've haven't had this problem with the Wii version. What happens is that the minute you are close to an enemy the target automatically locks on, so you just jump and hit the enemy, preventing a death. Sure at times it happens but from my experience, it was mainly because I wasn't careful or was too distracted. There's also the Wisps that attack many enemies at once, and there is nothing more satisfying than running very fast through a horde of enemies and killing them all in one swift move.

Yea, I wish I played the Wii version instead. I didn't enjoy this game.

Yea, I wish I played the Wii version instead. I didn't enjoy this game.

While I can't guarantee that you will enjoy it, Sonic Colors must be checked out at least once. The level design is far more interesting than in Unleashed and Sonic 4, the sense of speed is great and the Wisps add a lot to the game without being a complete nuisance like the sword in Black Knight and the Werehog in Unleashed. In fact save for some stages you can avoid using them, which GameTrailers complained about, but I think its good. I mean, Sega has been having issues implementing gimmicks into the Sonic formula, so for once I'm glad that they decided to experiment while not shoving it down our throats.

But I've said enough, I'll leave it for the review. 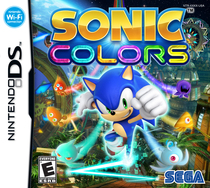