Last Window: The Secret of Cape West is the sequel to Hotel Dusk: Room 215 from 2007. The first game focused on the life of a former member of the New York Police Department who was on the move trying to find out details about his old partner. Now one year later, Kyle Hyde finds himself inside the Cape West apartment building. Soon after exploring it, he finds that it may have a connection to his father's death, and decides to explore the building's mysteries before it is demolished.

Last Window throws players into a brand new experience but makes oblique references to the past game, through items found in the apartment complex and characters that occasionally appear. Those who finished Hotel Dusk will obviously understand their purpose, though for newcomers it is not mandatory to understand their background to complete the story.

The game is controlled by turning the Nintendo DS on its side like a book and using either the touch screen or the D-Pad for Kyle's movement. An overview perspective of the room you are in can be found on the right screen, while a 3D look can be seen on the opposite screen. While the conversation scenes contain fluid animations from the characters, the 3D perspectives of the various rooms are rather muggy and lack clarity. In general these perspectives work well, though it cannot help but be noted that the character models, which are in 2D, look awkward in three-dimensional areas. It’s not a huge gripe, but considering the fuzzy backgrounds, the exploration part of the game comes off as a little disappointing in the visual area.

Most of your time is spent engaging in conversations to learn information about the apartment building complex or wandering around the hotel, searching for clues and investigating items. Occasionally, a puzzle might come along that you may need to solve, but for the most part, you’ll be interviewing people and trying to dig deeper into their past. Sometimes you'll stumble upon an object that seems a little out of place. By tapping it, Kyle Hyde can focus on that object and examine it. You may find something behind it by turning it or by shifting the angle that Kyle looks at it.

As just mentioned, Kyle Hyde spends a large chunk of his time talking to the tenants who are in the Cape West building. By listening to what people have to say, players can pick on small details and then question the individuals about it to find out even more information. You have to be careful of how much you ask though, because if you get the character upset, it will result in a game over screen.

One aspect of Hotel Dusk that garnered complaints was the massive amount of text that was bestowed upon players. That text is still present in Last Window, but an option to skip the text is included. However, taking advantage of this feature will mean that you miss out on important information, and considering that the game quizzes you at the end of each chapter, it might be worthwhile to read the text and enjoy the game for what it is.

Last Window is a fairly lengthy game. The game is composed of ten chapters, each of which can have anywhere from one to three hours of gameplay. The chapter system makes it easier to jump into the game when you start playing again, much like how it makes reading a novel easy to do.

Last Window: The Secret of Cape West is a fitting send-off for Cing, the developers, who were forced to file for bankruptcy in March. Their last game is one of their best games, and also one of the best for the Nintendo DS platform. The game never has a dull moment as once you have one mystery solved, another comes along to pique your interest. The game is not on the short side either, as the main quest can take over 10 hours to complete. For those looking for something to sink their teeth into as the days become shorter, Last Window is the game for you.

Damn you, NoA... announce a US release already!

At least importing this won't mean hacking my DS...

Purchasing Hotel Dusk for $4.50 in new condition at an FYE was one of the best purchases I made this year. Now, I just want to pay full price to play the sequel. It was such an involving experience; I wouldn't mind playing a crime "novel" with really perceptive dialogue once again.

Hotel Dusk was an awesome game, I really want to play this. I could be mistaken, but wasn't this not coming to America? Tell me I'm mistaken.

It's not been announced for the US.  The second game in the Trace Memory/Another Code series hasn't been released in the US either.  Also, Cing has filed bankruptcy.  All this combined leads to the thought that it won't be released in the US.  Oh, and Nintendo hates me.

Thankfully, with a UK release, since it's region free DS, I'll be able to import it with little problem and mostly in English, as long as I don't mind all of those misspellings like "favourite" and "colour".  Damn UKers, why can't you speak English?

Thankfully, with a UK release, since it's region free DS, I'll be able to import it with little problem and mostly in English, as long as I don't mind all of those misspellings like "favourite" and "colour".  Damn UKers, why can't you speak English?

Well, I guess I'll import it as well. They do speak English, it's just... old :P 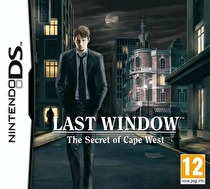