A journey further down the Madden Wii rabbit hole reveals some successes, and some failures.

That doesn't mean EA Tiburon's second go-around with Madden on Wii is bad. The solid groundwork from last year's game is still present, and playing football with Wii controls is still a fun, albeit very arcade-y, experience. There are numerous embellishments on last year's gameplay, specifically prettier graphical effects and GameFlow, a new play call style that more or less removes play calling. However, GameFlow is also one of the game's biggest failures.

The idea behind it is that it will pick a smart play for every situation, but in my experience it seems to function as nothing more than the series' staple "Ask Madden" play call selection functionality. But with GameFlow, unlike Ask Madden, you can't easily change the play due to confusing pre-play control and a terrible audible system that occasionally bugs out and only lets you select HB Dive or Slot Cross. Furthermore, if you override GameFlow and go to the conventional play call screen, you're only given roughly 16 of the game's 300 plays to choose from. Luckily, the regular play call mode is still there, and has been improved by allowing four plays to be viewable on the screen at once.

The new and improved Franchise mode is the game's biggest addition, and it provides a very video game-like Wii slant to the classic mode. The interactive virtual campus that changes as you succeed or fail is aesthetically pleasing and easy to maneuver within. The idea of making your team the best ever gives you an ultimate goal, even if you're romping through the league.

On the whole, the new Franchise mode is great outside of one huge problem: using the pointer for certain tasks - namely scrolling through free agents or your roster - is majorly convoluted. Instead of simply pressing a button to move between positions, you have to point at the screen, press a button, switch to defense or special teams if needed, and then finally select your position from a visually-pleasing-but-functionally-poor select screen showing the offense or defense in a general in-game formation. The pointer works well for almost every other part of the game, but in the in-depth Franchise mode it doesn't work as well for everything.

Madden Showdown and Road to the Super Bowl (modes from last year), are still awesome multiplayer experiences and they received little to no changes in this new version.

Graphically, the game is fantastic. The uniform and unique art style features many graphical embellishments from last year's game, including cool rain and snow effects and all sorts of uniform and field degradation. A neat layered interface has been added for when you make game-changing or game-ending plays where the celebrations will be more bombastic. It makes it even more rewarding when you score the winning touchdown in the final seconds and you see your team's logo prevalent all over the screen.

The play-by-play, which features Gus Johnson alongside Cris Collinsworth instead of the robotic guy they had before, is improved. But like pretty much every other Madden game, the lines repeat often. The music selection features a good amount of classic stadium songs, which is a nice change from the seemingly random smattering of songs in recent installments.

Despite its issues, Madden NFL 11 is still a good football game, especially if you're into arcade sports games. If you're into the nuance, realism, or the sim-heavy elements of Madden, you're better off picking it up on another system. If you're ok with having a little light-hearted fun, perhaps with a group of three friends in the comfort of your own home, then Madden NFL 11 is the right fit for you.

you said arcadey. are the slider options plentiful this year to swerve the action towards a sim style of play?

I'm with Tommy. Are there ways to make it sim like? As I posted in the last article about this, who is the franchise mode as the years go by?

I can live with gameflow not working and the pointer controls, but no talk about online play and I could use a bit more on franchise.

Not sure how I feel about this right now.

I couldn't tell any ridiculous outliers in franchise mode, and the online mode is largely forgettable as it is the typical single-play exhibition stuff that's been in the game for a few years.


It's tough to make it more sim-like when the experience is so arcadey. I tinkered with the time and sliders, and I couldn't make it as simmy as the HD versions that I've played recently.

question about this game - this is the first madden game i've purchased in a long time.  i bought madden 11 because i figured it would have all of the features i wanted.  the feature i was most looking forward to was unlocking old teams (like the 1991 buffalo bills).  is that not part of madden 11 on wii?  thanks!

There's some legal issues with the use of retired players, so there haven't been classic teams in any Madden game for the last few years.

I think they still do it though, don't they just use the numbers instead of names? I know the retired players have a current lawsuit against EA despite that though. Of coarse, when the Xbox 360 launched EA Sports decided to be dicks and start charging for stuff like classic teams and stadiums despite those things being in previous games.

thanks for the responses.  this news does make the replay value go way down for me.


and if anyone else has played this game, do you know how to keep your players between seasons?  i went through the off-season and somehow lost all of my players! 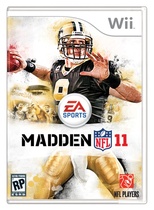