Why can't it transform into something worthwhile?

Let's be clear up front: this is not a Wii port of the well-received War for Cybertron, which is available for PlayStation 3 and Xbox 360. It might follow the general story and aesthetic of that title, but it's actually an on-rails shooter. Of course, the rail shooter stigma wouldn't matter much if the game turned out to be excellent, like last year's Dead Space: Extraction or House of the Dead: Overkill, but it’s not. Cybertron Adventures is a terrible game fraught with low production values, a criminally brief lifespan, and glitches.

Cyberton Adventures (and War for Cybertron) is a prequel to the original TV show that most of us grew up loving. It concerns the civil war between the Decepticons and the Autobots, and the ensuing destruction of their home planet of Cybertron. To be fair, that's pretty cool, and the mere fact that you're playing a game based on that continuity adds some flavor to the proceeding that are otherwise completely forgettable. Running around as Bumblebee through a Decepticon stronghold is cool, but, unfortunately, the gameplay doesn't hold up. This is largely because Cybertron Adventures plays itself, and only asks you to shoot things and drive a lot. Shooting segments attempt to mix things up by offering cover (hold A) and four different weapons. The weapons are all useful in certain situations, and the developers did a decent job of arranging enemies so that you'd want to use each one.

However, even that amount of depth can't hide the fact that the shooting segments boil down to pop out from cover, take a few pot shots, then go back to cover, repeat endlessly. Because you're not in control of your character's actual movement, the whole process gets boring pretty quickly. Co-op, which adds a second gun to the screen, makes stages go by quicker, but there's just not a lot to do here. The vehicle segments see your Transformer transform and zoom down an often narrow road, shooting obstacles and firing missiles at overhead enemies. Since you can steer during these sections, you'll find it easy to fall off the road or fly off a ramp at a bad angle and end up clipping the edge of the road at the other side and dying. Flying missions offer a little more stability, but there's an awful lot of debris to avoid or comically run into.

The Transformers themselves look alright, but not awesome. Those things you think are lighting effects are just painted-on textures. There is a dearth of enemy types, and the environments are actually difficult to appreciate because they're really just collections of geometry without real textures. When the Transformers do transform, it ends up looking a little awkward, and not well thought-out. The voice work runs the gamut from okay to awful. Soundwave is unintelligible, but at least Peter Cullen is still voicing Optimus Prime.

Beating a stage unlocks that same stage in Challenge mode, where you are asked to perform certain tasks during that stage. You're really just playing that same stage over again. What's even worse is that the entire game—that means both the Autobot and Decepticon campaigns—takes about three hours to complete. It's even quicker with a second player suffering alongside you.

The game also has many glitches. There will be times between firefights when your character is moving around and he'll stop to look at something. The camera will zoom in, and then stay there. Forever. Nothing else will happen, and you can't just restart at the last checkpoint. You have to quit out to the main menu, and restart the mission. During Co-op mode, there will be times where the second player's gun just doesn't fire.

Cybertron Adventures has way too many problems to be worth your time. The lackluster and unstable gameplay make the whole experience unfufilling. If you're really desparate for a Transformers game, track down a copy of War for Cybertron if you have the means; it is supposed to be awesome.

It's a crime and a shame. Can't believe they had the gall to pull something like this after the sales disasters like Extraction. You'd think that would have been a strong hint to NOT make this a rail-shooter.

Does anybody really believe the stereotypes third parties have about Wii gamers are grounded in reality, especially sales numbers?

Had family visit last night, including a young cousin that is a huge Transformers fan.  He excitedly brought out Cybertron Adventures in hopes that (a) I owned a Wii and (b) I would be interested in playing.  Guessing 1 out of 2 isn't bad, so we spent a little bit of quality time playing.

He enjoyed the game and thought there was some cool looking stuff that could happen.  It was a bit confusing how such an "awesome"game controlled so poorly though, and after about 20 minutes he seemed to be getting bored with the game.
I was totally surprised by the game.  Sure the reviews are out there... but none managed to really impress on me how bad this game really is.  Controls are awkward and not very responsive, graphics are terrible, gameplay is repetitive and boring.  Calling this a cheap cash-in would be giving the game too much credit.
The good news: My cousin spent under $10 to get the game used.
The bad news: That $10 would've been better spent on almost anything else.


To anyone else who is mildly curious about the game: please save your time and money.  I don't know if fault lies with Activision or the development studio, but Cybertron Adventures is a blatant example of using a license to sell a subpar product.


(Sadly, the game will probably sell enough to justify this "profit over quality" approach to software development.  Despite being much worse than Dead Space: Extraction, the Transformers license alone will probably allow this game to move units.)

I was incorrect on Newscast when I said that this pile has the same box art as War for Cybertron. In fact, it's a different picture of Optimus.

I'm saving up credit at Play 'n' Trade, but three games are competing for my attention: War for Cybertron (PS3), Peace Walker, and Dragon Quest IX. It's quite a pickle.

It's not surprising to see a bad movie-tie-in-game but was kinda surprised to see how bad the game was coming from Next Level Games which was coming off a highnote with PunchOut.

Yeah, it's sad that Dead Space didn't sell worth a Sh!t but this POS will no doubt sell just for being a Transformer game. 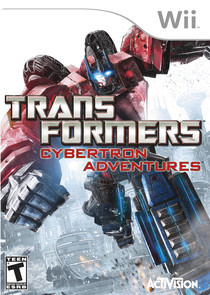