Come with me and we'll kill this Cruelcumber together.

Dragon Quest has always been a high-quality series, even though its core gameplay has remained relatively intact much over its eight installments. Dragon Quest IX, the first original mainline entry on a handheld, doesn't quite change everything, but it mixes it up enough to be a fresh and awesome old-school RPG. The addition of an interesting multiplayer component makes it even better.

Aside from the multiplayer, which we'll get to later, there are a number of key differences in the game that are marked improvements. First, there are no more random battles; instead, enemies populate the overworld and dungeons, and you have to make contact with them to start up the series' trademark turn-based battles. While the turn-based battle mechanics haven't changed much, the presentation has. It's a lot more cinematic this time around, as characters move across the screen and attack enemies once you dial in their commands.

In Dragon Quest VIII, weapons were individually styled and shown on your characters. This time around, every piece of both of weapons and armor have their own models, and each one is accurately displayed on your in-game character. While it might not make battle sense to equip your female warrior with a red skirt, it might go well with her red top.

If the fact that there is a decently strong piece of armor called 'red skirt' doesn't make you laugh, then maybe other parts of the comical translation will. You'll be fighting against Meowgicians and Teeny Sanguinis in Brigadoom, and then watch as the once kind Jack of Alltrades transforms into the evil Master of Nu'Un. It's kind of hokey, but it works very well in a world where metal slimes dole out oodles of experience.

Making room for the multiplayer, there are several story conceits along the way. You begin the game as a newly crowned town guardian from a heavenly race of angels called Celestrians. You create your character's look from a limited but healthy amount of options. After a cataclysmic event happens, you lose your powers and fall down to earth, where you must figure out what happened. As you help people along the way you eventually gain access to Quester's Rest, which is the central hub for the game.

At Quester's Rest you can assemble a team of random or created characters, or you can team up with a player from another game as long as you're locally connected. You can only have four people on your team at one time, so you can participate in local multiplayer with three other friends. Each game card is treated as an alternate universe, so you're treated as a guest in your friend's worlds. You can't go on story quests, collect certain treasure, or gain dropped items from enemies, but aside from that, you can traipse around these other worlds to your heart's content by yourself, though you can be called to a battle if your friend needs help. The local multiplayer component is spectacular if you have the opportunity to do it. Sadly, since it isn't online, this mode may not be used too much by many players.

As good as the multiplayer is, the single-player game is still as engrossing as every other entry in the series, if not moreso. The 40-hour main quest is addictive, fun, and even longer if you count the loads of side quests, weekly downloadable quests, and treasure maps. The only downside is that the treasure maps have to be received in tag mode; this means you have to have your system on in tag mode and pass by another person with the game in tag mode. If you're in a city, this could be awesome. If you're in the country, you should make it your business to go to an event like PAX at some point to load up on treasure maps with fellow gamers.

Dragon Quest IX is a fantastic game, and it is easily the best new traditional RPG to grace the DS. The multiplayer offering is cool in concept, but the fact that it isn't online will likely limit its effectiveness. Regardless, the single-player mode is long, rife with depth, and truly excellent. If you have even the slightest interest in RPGs, this game is a must purchase.

Thanks for this excellent review, Neal.  I already had the game pre-ordered, but you have increased my hype meter tenfold.  Can't wait for it to come in the mail today!

Also really glad to hear that every piece of armor and weapon graphically looks unique on the characters.  I love that about RPGs when they choose to do it.

Neal, excellent review. I agree that the single player is simply fantastic.

While the game just came out, the multiplayer scene in Los Angeles is looking pretty grim. I have never once seen anyone play a DS on the train/bus, and once I get in to Los Angeles proper people are more worried about escaping the homeless people than leaving their DS on tag mode. Perhaps this will work out better on my college campus?

Glad to see DQ IX getting the respect it deserves, not getting crapped on like Dementium II.
I have and am enjoying this game. Im not an RPG player, apart from Fire Emblem i dont play
RPG's much.  This is making me wanna go back when im finished and get IV V and VI if its released.

Did anyone else immediately think, "Unobtanium" when they saw "Benevolessence?"

Considering that the average person going to PAX is usually pretty geeky, I think there is a good chance you will be able to find at least a few dozen people with the game (not saying that only geeky people like this game, just that they especially like RPGs).

If I play this game and really like it, I'll definitely tell everyone it was because of Neal. Likewise if I can't stand it.  ;) 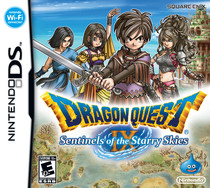