Spend your days working as the sole animal supplier and caregiver in a town where no one has owned a pet before.

My Pet Shop is surprisingly well-polished for a game aimed at a younger, casual audience. The graphical style is bright and cheerful, with characters reminiscent of those from the Cooking Mama series, and detailed pets.

The game starts off with you and your mother moving to a new town from the city.None of the people have pets in this town, so it is up to your pet shop to provide the citizens with cats, dogs, rabbits, and even penguins and tigers. The main aspects of the game are collecting these animals, caring for them, and staging animal contests.

Each day, you are limited to a certain number of tasks, so after the maximum has been reached you must rest and your allowance and customer bonuses are paid. You're free to end the day whenever you wish.

Money can be used to buy animal clothing, food, and lure items. The fastest way to make money is by completing tasks set to you by the townspeople. At first these tasks consist of going out and catching animals from locations outside of town. Animals are randomly encountered by shaking bushes, trees, rocks, and similar. Then the catching process begins, with options to step forwards, back, or stand still, and to use food or lure items or your animal pet to help.

When you have provided the right animal to each person, they return constantly to ask for you help in taking care of the animal. The care activities, such as washing, brushing, training, and walking, are basic stylus-controlled actions, simpler than those from the Nintendogs series. They will also ask you for help in the animal contests, which have similar touch screen actions.

The gameplay is well thought out, with everything from the number of tasks you can accomplish per day to the locations you can search gradually expanded as the game goes on. If you cannot figure out how to move the story forward, there is an advice mode that gives you a suggestion of the activity that needs to be done. There is a lot of variety as more locations are unlocked each with different animal species, along with new items, and there is quite a lot of detail in the tasks and the town interactions.

Unfortunately, one of the main aspects of the game quickly becomes tiresome. The animal fetching is actually quite difficult, especially for rare species that can take over thirty minutes of gameplay to show up once, depending on your luck. As you have no experience with new species, it requires trial and error to find out what food and tools can lure them. Rare animals are also harder to catch in the first place, as they are usually scared and run off. It's not uncommon for it to take over two hours to catch certain species.

My Pet Shop is a very well-presented game that should appeal to all new gamers, not just the younger ones. People that are used to a more complex game are likely to find it repetitive and not very engaging. The difficulty of catching rarer species, some of which are integral to advancing the storyline, is a real dampener on a game that would otherwise be highly recommended to the Cooking Mama crowd.

The pet models in the care mode are detailed, and the cartoons of the characters and buildings give the game a bright and cheerful style.

There's nothing noteworthy, but there are some nice sound effects for each of the animals. This helps in animal catching as each animal and breed of animal has a different call.

Everything is controlled on the touch screen with the stylus. This control scheme is very responsive and easy to understand.

The tasks in themselves are a little repetitive, but there is a decent amount of variation in the activities included. If only it wasn't for the very difficult pet catching mode.

Seeing that it takes hours or even days to catch some of the animals, it will be a while before everything is completed by the average player. The gradual unlocking of components and the progression of the story line also extend the game.

My Pet Shop DS will provide some enjoyment for those that can cope with a few hours spent here and there on wild goose chases. It compares favourably to DS games of a similar style. 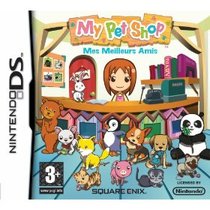