D.I.Y. is easily the most complex WarioWare title yet.

Ever since the series made its debut on the Game Boy Advance in 2003, WarioWare has been about one thing: providing the player with wacky fun while presenting Nintendo's technology in an appealing manner. WarioWare: Twisted introduced tilting controls on the handheld. WarioWare: Touched utilized the intriguing DS touch screen and WarioWare: Smooth Moves cemented the Wii as the best console for family entertainment. Now, the fifth game in the series, WarioWare: D.I.Y. returns to the DS, and this time its mission is far more serious and complex than ever before: letting players create their own games.

Right from the start you are not placed into the series staple of high frenzy microgames with as little explanation as possible. D.I.Y. instead introduces the player to the concept of microgame creation. You will be able to create everything from the characters and objects to the music and even the AI (Action Instruction, or what the games do during gameplay). Due to this complexity, the first few hours of gameplay will be spent teaching you how to create games as good as Wario's own.

While the avalanche of information can be hard to digest, and at times it can get very boring, it is important that the player understands this concept since the game revolves solely around it. Like I explained earlier, you will be able to create the characters, the background, the music, and the action. In objects, players can design what they see on the screen, whether it's a character or an object. Everything from the color to the animation can be created and altered in nearly every manner. You can slightly alter the frames to create more vivid animation, and even change the speed in order for the animation to be more convincing.

Once you have all the objects you must then create a backdrop, which is a very simple task. If the players desires, they can also create the music that will be heard in the microgame. There are a lot of options to choose from when creating a song. But if you aren't the musical type you have the option of letting a maestro "compose" the song for you. You can even choose the type of mood the song expresses.

Finally there's the hardest and deepest element of game creation: the gameplay. This is where you design how the game plays and interacts with the player and where the Action Instruction comes in. Every element of the game must have a command to follow. This can be programmed by tapping on the object and programming its actions, whether it's a simple animation loop or a complex command issued forth by the player. D.I.Y. spares no expense in bringing every option possible to this element of game creation. Even the winning conditions must be set here; otherwise you will have a useless and unplayable game.

The amount of options can be very overwhelming, and it's the area that requires the most practice before you can create a great microgame. But the more time you spend on this, the more likely you are to create a memorable microgame, especially since D.I.Y. brings you the tools needed to create anything you can come up with. For example, to compensate for the challenge of making your own game, you can borrow elements from the pre-made games, including their AI, and use them on your own games in the event that you lack the advanced skills for more in-depth endeavors.

Microgames are not the only things you can create in D.I.Y. Players can also create four-panel comics using the same tools offered in the microgame creation modes. Finally, musical tracks can also be created independently from the music creation software in the microgame modes.

One important element of the WarioWare franchise is that it encourages social interaction between players, whether they are in the same room or across the globe. D.I.Y. keeps this tradition alive and well despite its game creation moniker. Players who spend countless hours creating games and wish to show them off can upload them to Nintendo Wi-Fi Connection and have their friends download them. They too can download other titles available on the service, including Big Name Games, which are created by some of the most famous names in the industry. Some of these include Masahiro Sakurai (creator of Kirby and the Super Smash Bros. Series) and Yoshio Sakamoto (the man behind the Metroid series). Future updates will bring even more game creations from the likes of Team Meat (Super Meat Boy) and Gaijin Games (BIT.TRIP series). Finally, Nintendo will also offer special competitions with different themes. The best game that represents the theme will be featured and available for download.

There's no denying that Wario Ware: D.I.Y. is the most robust game in the series. The development team didn't skim on any features and options just to make sure any idea, no matter how basic or surreal can be brought to life. The additional downloading and sharing options are quite brilliant and encourages players to do their best so that their work can be featured and appreciated by other players.

But if there is one thing that D.I.Y. fails at is instant accessibility. The WarioWare games were always about offering gameplay that is very easy to comprehend, making the gaming session one that anyone can get into in a matter of minutes. With the focus being on user-generated content, the iconic ease of use has now taken a back seat, likely to alienate long-time fans and casual DS gamers.

The other problem lies in the microgames themselves. While in the past the games boasted over 200 microgames to discover, D.I.Y. only features 90, and they are unlocked once per day. This effectively forces the player to spend his or her time on the game creation aspect, leaving the actual gameplay at a distant second. There's no denying that the tools being offered are some of the deepest Nintendo has ever released, but it's disappointing that the game is limited when it comes to actual gameplay.

Regardless of this, though, it would be foolish to ignore what Nintendo has accomplished here. Everything you could ever need to create the best microgame on the planet is in Wario Ware D.I.Y. Even if the learning curve is steep, you will be amazed at how much freedom the game offers when it comes to creativity. The additional comic and music modes, as well as the online modes, sweeten the deal even further. As long as you realize that this experience will be radically different from the rest of the series, WarioWare D.I.Y. should delight players.

The trademark wacky presentation makes a welcomed return in D.I.Y. The menus in the game creation tools are very clean, accessible, and easy to read, making the already daunting task of game creation easier and more fun to enjoy.

The WarioWare franchise is known for its creative and addictive music, and sadly D.I.Y. is the weakest of the bunch. On the upside, the music creation tools are quite good, and the fact that you can create your own music makes up for the so-so soundtrack.

The game is controlled solely through the touch screen, and it works perfectly. Drawing on the touch screen takes a steady hand, but rarely will you experience a game-breaking problem, and in a game as gamer-focused as D.I.Y, this is important.

The game creation tools offered are some of the best Nintendo has ever offered in a game like this. The ability to download and share microgames, as well as create comics and songs, complement the game very well. But the actual gameplay the series is known for takes a back seat, which might not appeal to long-time fans.

Once you comprehend all of the features the game offers, you can spend a lot of time creating and tinkering with your own microgames. Being able to download new games, including those made by renowned developers, extends the gameplay significantly and should inspire gamers to show off their skills.

Nintendo took a risk with Wario Ware: D.I.Y., and for the most part, the gamble paid off. As a creativity tool, D.I.Y. shines magnificently, offering all the tools necessary to create a micro-game presented in a nostalgic Mario Paint manner. As an actual game, though, it makes a lot of sacrifices in order to present its ambitious ideas. However, the overall game is definitely one of the most polished entries in the series yet.

There have been four Big Name Game releases so far, I make sure to mention them in my new VC/WW/DSW thread. Here are the ones released so far:

The game sounds pretty fun, I will pick it up eventually.

Might have to get this someday. Great review, Pedro.

I think it would have been worth mentioning that you are only allowed to create "tapping" microgames, and if you want to scratch, swipe, or wiggle you're out of luck.  That's a huge turn off for me.

I think it would have been worth mentioning that you are only allowed to create "tapping" microgames, and if you want to scratch, swipe, or wiggle you're out of luck.  That's a huge turn off for me.

Actually I can see why they omitted the more complex mini-game options.


Allowing the players to do other actions besides tapping would have meant more development time and an even more complex set of tools. The already existing tools are hard to understand as is, so adding these options would have been overkill. Not to mention that in order for the games to interact on the WiiWare version they needed to be tapping games so it could work with the Wii Remote pointed. 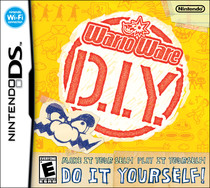