Who knew that dinosaurs would survive and burst bubbles in space?

Bust-A-Move is a long lasting series that is also known as Puzzle Bobble. The latest entry takes Bub and Bob on a journey in space. Even though the setting is different, the classic "match three" gameplay and addictive nature of the series are retained alongside a lot of great modes and online play.

Like every other game in the Bust-A-Move series, you try to match at least three bubbles of the same color in order to eliminate them. The other way to eliminate bubbles is making them drop by eliminating all other attached bubbles. Over time, the bubbles that you have to destroy will get lower, and if they reach the bottom of the level, you will lose the game. In addition to standard bubbles, there is an assortment of bubbles with special properties, such as a bubble that eliminates a horizontal line or a bubble that explodes on impact.

There are three ways to control the game. The D-pad and button controls are like every other Bust-A-Move game. The D-pad allows you to move the launcher arrow and the A button fires your bubble; depending on your settings, you can also use the L and R buttons to make slight adjustments that might be hard to perform with the D-Pad alone. The touch screen controls are worse than the previous Bust-A-Move title on the DS. In the previous title, you essentially controlled a virtual slingshot to launch your bubble, but in this game you touch virtual arrows to move your launcher arrow. If you hold down the virtual arrow, you can move the launcher at a slightly faster pace, and to launch the bubble, you have to touch the bubble in the launcher. If you want, you can use stylus and traditional controls simultaneously; however, I recommend the traditional controls since they are great, while the touch screen controls feels a little sluggish. One nice surprise is that the North American version also supports the Taito Paddle controller (which plugs into the GBA port of a DS or DS Lite), and when using this peripheral, the launcher arrow moves as fast as you turn the knob on the peripheral. [Ed. – The Paddle controller is only sold in Japan but is fully compatible with non-Japanese systems.]

In story mode, you travel to different planets in order to collect Cosmos bubbles. There are three levels in each planet, and each stage is made up of a gauntlet of five puzzles. There will be a Cosmos bubble in one of those five puzzles, and the only way to successfully obtain it is to make it drop. If you match it with the same color, then the Cosmos bubble will simply shatter, and you will be forced to restart the whole level from the beginning. Collecting all of the Cosmos bubbles also lets you unlock a special item in the shop.

Once you clear the three levels in each world, you will be able to fight the boss. The boss battles are very satisfying, as the boss takes up most of the top screen and fires obstacles to the bottom screen. In order to defeat the boss, you have to eliminate all the bubbles attached to its body. The early boss battles are fairly simple and straightforward, but as you progress, the bosses become slightly more complex and difficult.

Besides story mode, there are five other single-player modes. Three of them must be purchased through the shop by coins, which are earned after playing any mode. The extra single-player modes consist of an endless mode and four different modes that focus on specific types of puzzles.

The multiplayer consists of local download play, where only one game card is needed to play against three other people. Online play is available for up to four players total. Both multiplayer modes consist of versus matches, where the goal is to make other players lose by filling up their fields with bubbles. The online multiplayer has no lag, although there is a weird delay between firing a bubble and waiting for the next one to appear on the launcher arrow. The delay seems to be some kind of balancing mechanism, but at the end of the day, this feature feels odd.

Space Bust-A-Move is a great sequel, as it is filled with addicting gameplay that the series is known for, and on top of that, there is a lot content to come back to. The only disappointing thing is to see that touch screen controls have been downgraded; however the inclusion of online multiplayer and Taito Paddle controller support greatly makes up for it. The game is highly recommended for people who are fans of puzzle games or the Bust-A-Move/Puzzle Bobble series.

While the game is very colorful and appealing, the graphics aren't anything special.

The soundtrack consists of songs that are upbeat and catchy.

This game retains the simple, fun, and, addictive gameplay that the series is known for. While there are some new gameplay ideas, they never deviate from the core gameplay formula.

There are a lot of different single player modes available in the beginning and a lot of extra content to unlock, such as more modes and a lot of customizable bubbles and launcher arrows. The game also features single-card and online multiplayer.

Space Bust-A-Move is a great entry in the series. This iteration retains the great addictive gameplay the series is known for, alongside numerous great modes that will keep you busy. 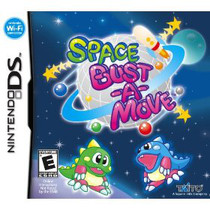