This solid puzzler with a charming look is marred by repetition and too many gameplay elements to keep track of.

Southpeak Interactive’s Roogoo franchise began its life on Xbox Live Arcade and the PC. Its colorful characters and inviting gameplay soon made their way onto the Wii and DS. On the outside, it looks like an extremely adorable puzzler akin to Nintendo’s Puzzle League, but once players dive into Roogoo’s world, they will discover that there’s a lot to learn and experience. They might also be intimidated by it all.

In Roogoo, players rotate a series of circular platforms with cut-outs for different shapes. A set of colorful triangles, squares, and other blocks descend from the sky, and the goal is to rotate the platforms so that the blocks fall through all of them and reach the bottom. If the correctly-shaped hole is not placed properly, the block will bounce away and be lost; lose enough of them and it is game over. Yet Roogoo goes beyond these basic concepts and implements even more ideas that make the game both exciting and extremely confusing.

Players can use an on-screen net to catch butterflies and bats to add to the score. In some stages, the holes are blocked, but a flick of the Wii Remote causes the dropping blocks to forcibly spin into the obstruction, allowing the blocks to pass through. Enemies can also appear and block the holes, forcing players to use the blocks falling at high speeds to knock them out. Finally, there are boss battles that combine every gameplay element into a single fast-paced stage.

There are mini-games, such as butterfly catching, block catching, and even a flying activity in which you control Roogoo, the title's adorable and adventurous protagonist, as he flies through enemies and collects blocks for the highest score possible.

The single-player mode features over 90 levels scattered across nine worlds, each with its own theme (forest, ice world, caves etc.). There are three levels of difficulty: Casual, Normal and Roogoo Guru. The speed of the blocks changes in each mode. There are also two multiplayer modes. In Split-Screen Race, two players compete to see who can complete the tower first. It's a solid mode, though it doesn't do much to keep players at it for hours. Party Mode allows up to 4 players to compete in mini-games. As an added bonus, players can connect the DS version of Roogoo to unlock extra stages.

Roogoo is a very robust package, which is both great and problematic. A variety of different gameplay elements make each stage unique and keep things interesting and fresh, especially during the later levels. However, the additional gameplay elements, such as bat catching and enemy destruction, in addition to a camera that makes it hard to follow the action, make the game a very confusing one to follow. Unfortunately, the confusion doesn’t actually makes the game more challenging; it just makes the game annoying. There are too many concepts in play, harming what is an otherwise solid experience. It doesn’t help that the game can get repetitive during long gameplay sessions. Roogoo is a title best enjoyed in small doses, and players may also find it a little too easy.

Roogoo, however, impresses with its style. It takes place in a magical world filled with wonderful looking creatures brimming with personality and charm. The game doesn’t push the Wii hardware, but it does feature beautiful 2D character artwork, and the levels themselves shine thanks to simplistic yet colorful details.

Roogoo Twisted Towers is a solid puzzler that might garner some fans thanks to its compelling gameplay concepts and interesting character designs. Unfortunately, its sometimes overcomplicated gameplay causes it to fall short of greatness.

It is not a graphical marvel, but Roogoo is very colorful and pleasing to the eye. The 2D artwork is the best element of the visual presentation.

While not as engaging as the graphics, the music and sound effects in Roogoo’s world manage to be soothing without being too intrusive

There is nothing bad to report here. Each button press does its job well. The minimal motion control used to activate the block's drill also works fine.

Roogoo is very easy to learn. The basic "falling puzzle piece" gameplay is solid, but the decision to include as many concepts as possible does more harm than good. Repetition and lack of challenge also damage the overall gameplay.

If you dedicate yourself to Roogoo, the title will be in your Wii for a long time. With over ninety levels to conquer and additional game modes, there’s a lot to discover in Roogoo’s colorful world.

Roogoo Twisted Towers is a Wii title worth trying at least once. The additional game modes and expansive levels will appeal to many a gamer. It’s too bad, however, that the attempt to make the game more complex just makes it confusing at times. Sometimes less is truly more. 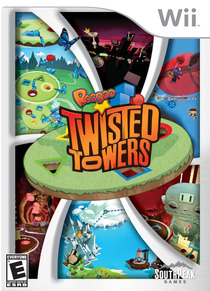