Does Unit 77 come through on the DS?

Every once in a while gamers come across a game that they never heard of during its development, only to discover them and be surprised at how solid it is, leading the title to become a beloved sleeper hit. Elite Forces Unit 77 by Gammick Entertainment at first appears to be one of these games, but certain design choices keep it from being truly memorable.

The game tells the story of an elite force called Unit 77 that is sent by the United States government to investigate the disappearance of some of the world’s most famous and influential people. Their mission is to destroy the terrorist organization behind these kidnappings and bring the victims back home, safe and sound.

Elite Forces: Unit 77 is a mission-based action game with a strong focus on controlling four different characters. Each member of Unit 77 has his or her own set of skills that will help them accomplish their mission. For example, Dag Hammer can destroy enemy vehicles with his bazooka, Bill Matic can throw grenades and de-activate fences and security systems, and Kendra Chase is the sniper of the group. Some missions have you controlling two characters, while in others you control all four.

The missions have goals such as defeating enemy bases, reuniting with the other members of the group, and discovering clues as to the whereabouts of the kidnapped people. The missions are filled with terrorists, deadly mine fields, and snipers that prevent you from completing your objective.

The entire game controls using the touch screen. Switching between the four characters is as simple as touching them on the screen, making multi-tasking a breeze. You guide your characters with the stylus. Tapping an enemy will make your character shoot at them, while the same action allows the character to disarm a mine field, open locked doors and gates, and even drive vehicles. For the most part the game impresses with its controls.

But what keeps it from being truly great are some annoying tendencies that riddle the game. One of the biggest flaws is that even when in some missions you have four characters to control, if one of them dies the game is over. No matter where you are in the mission, if the character is killed in battle the mission ends. While I understand that this provides a sense of realism, it would have been nice if the developers provided methods for rescuing or reviving the characters so that even if the actions gets a little rough you could still save your team mates. The game has save spots and checkpoints during the missions, but it is still very frustrating having to replay part or all of a mission because of one mistake.

There’s no multiplayer mode in the game, whether via local play or through Nintendo Wi-Fi Connection, which limits any potential replay value. The only other modes available are Quick Match, which allows you to play one of the missions, and Gallery, where you can see some of the artwork you have earned through the game. Elite Forces: Unit 77 is very light when it comes to content.

In terms of presentation, Unit 77 tries hard to insert some artwork that mimics the likes of Contra and even movies like Rambo. But while the artwork itself is pretty good, the in-game graphics are rather bland, lacking the detail and variety needed to make the exotic locales you visit exciting to explore.

Finally, the game just isn’t that exciting or fun to play. The missions tend to feel the same, and the game’s laudable presentation isn’t enough to keep the player interested. It’s unfortunate that the level design and mission variety is lacking, because the game's engine is really solid.

Overall, Elite Forces: Unit 77 is a game that had potential thanks to its great touch screen controls. But decisions like forcing the player to start all over again when one character dies, the lack of additional game modes, and bland missions make this title a modest, slightly rushed effort that could have been something special.

Elite Forces: Unit 77 would have been a very nice looking cell phone game. But on the DS it’s pretty drab. The character designs lack appeal and the soldiers are extremely generic. The stages fail to captive the danger one expects in action games like the one Unit 77 tries to be but fails to accomplish. It is one dull looking game.

Like the graphics, the music and sound effects are of the generic kind. Soldiers scream and grunt, the weapons sound deadly, and the music tries hard to capture the thrills of an action film score, but is really a very laughable attempt.

Credit must be given to the controls. Everything is controlled through the touch screen. Moving your character, shooting at enemies, disarming mines, and even driving vehicles feel natural and intuitive. The only blemish is that sometimes you have to be precise with where you touch on the screen, or else you might miss your target.

At its core Elite Forces: Unit 77 has a simple and good concept. The four character-based gameplay would have been splendid on a more fleshed out and presented title. But what truly ruins the experience is an unforgiving set of rules which ends your game the minute one of your team members dies. There are no extra lives or continues, and if you failed to reach a checkpoint you start the mission all over again. It doesn’t help that there is very little variety in the missions themselves.

There’s nothing else to do besides the main game, and you are bold if you decide to fully finish it. Despite touting four-character gameplay, there’s no multiplayer mode. You can collect pieces of artwork and play through one of the missions. That’s pretty much it.

The intentions behind the creation of the game were good. But the boring and generic presentation, lack of any meaty modes, boring missions and annoying penalty for death make this a title that’s best to avoid, despite how enticing it looks. 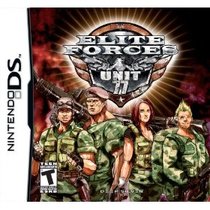