With a new viewpoint, touch screen usage, and a slew of improvements to the series, Chinatown Wars makes a grand entrance on the DS.

The arrival of the modern Grand Theft Auto series on a Nintendo console has been long overdue. Thankfully, the wait is over. While Grand Theft Auto: Chinatown Wars is not a substitute for a full-blown Wii game in the series’ standard over-the-shoulder third-person view, it is an excellent blend of both old and new-style Grand Theft Auto.

Chinatown Wars stars Huang Lee, who is returning to his Liberty City home to deliver his recently slain father's sword (the “Yu Jian”) to his uncle, Wu "Kenny" Lee. Upon his arrival he is jumped by assassins, and the honorable sword (won by his father in a card game) is stolen with Huang left for dead. As the game progresses, Huang seeks to avenge his father's death and retrieve the Yu Jian by performing odd jobs for various members of the Triad gang (to which both his father and uncle belonged).

Players familiar with any Grand Theft Auto games from III onwards will be thoroughly familiar with Chinatown Wars. Button-lock weapon aiming is still used, and driving feels mostly the same (though steering your car feels less floaty than in the console versions). The most recognizable difference is the altered point-of-view. Rather than the third-person view employed by its brethren, Chinatown Wars is a top-down, slightly isometric affair, giving players a bird's-eye view of the action. The side-effects of this change are ultimately for the worse. While this view change is likely what allows the game to run so smoothly on the DS, it also makes it hard to distinguish exactly what everything is, especially when blasting by in a car.

Aside from the complications arising from this perspective change, Chinatown Wars is a gorgeous game. Rockstar has managed to recreate Grand Theft Auto IV's Liberty City (minus Alderney) in beautiful cel-shaded graphics. The slightly isometric perspective of the top-down view allows players to appreciate the excruciating attention to detail that was taken when modeling the city. The game stays at a firm framerate and continues to look fantastic even while moving quickly in a car.

Aside from the viewpoint and graphical alterations, Chinatown Wars features a number of other changes. Players will first notice that the touchscreen is used heavily. It represents Huang's PDA and is used to receive emails from in-game characters, plot paths on its GPS, and provide Huang with other useful information. Later the touchscreen is also used to hotwire stolen cars, throw Molotov Cocktails and grenades, trade drugs with dealers, and complete a variety of other small tasks. The DS touchscreen usage is well-integrated, fun, and a welcome addition to the series. It streamlines many of the mundane menu tasks done via the cellphone in Grand Theft Auto IV.

Drug dealing is another key new addition. Similar to games like Drugwars, players can buy and sell drugs around the city in order to build up their cash reserve. Players will receive random emails on their PDAs either announcing a limited-time sale or request for drugs, and they will find themselves trekking back-and-forth across Liberty City just to do their drug dealing. While there are massive benefits to playing along with this mini-game, at times it can feel tedious given the large distances required to travel just to make a few bucks.

The final major change is to the police evasion system. You now must disable police cars (or get to a safe house or a Paint 'n' Spray) in order to avoid being arrested. Each Wanted Star represents a police car players must either smash into and disable, or outmaneuver and cause to disable itself. For instance, if a player has three stars, they must disable three vehicles to move down to two stars, another two vehicles to move down to one, and one final car to completely clear their wanted level. This change makes the game far more enjoyable, nearly turning police pursuit into a game (like Need for Speed) within a game. Unfortunately, because the top-down view makes itso easy for players to accidentally run into cops while driving, they will be forced into this mini-game quite often. Whether you’re trafficking drugs or performing one of the series' staple missions, hitting a cop car or running over an officer is inevitable.

Though much of the game's trimmings are new, the in-game mission structure introduced by III is still intact in Chinatown Wars. As in IV, players can also take on single missions doled out by random pedestrians that are complete with dialog (though no cutscenes). Vehicle missions such as taking fares in a cab are also retained. Interestingly enough, Rockstar has even managed to retain multiple radio stations in cars while driving, though none of them are my personal Talk Radio favorites from past entries. Players will be treated to the protagonist's (Huang) unbelievably sarcastic and funny dialog in the cutscenes preceding missions, and the series’ overall tongue-in-cheek humor remains intact

Chinatown Wars offers a nice variety of multiplayer modes for local battling. Players can choose from six modes including Race, Stash Dash, and Defend the Base. These modes help enhance the experience, but the inability to enjoy them with remote friends limits their appeal. There is an online component, but it only allows players to instant message each other, trade information and items, and send and receive map waypoints. The ability to earn money via online flash games for use in the DS game is also planned. The local multiplayer is definitely a positive, but it’s more of a bonus than anything else.

Grand Theft Auto: Chinatown Wars makes for an excellent addition to the series and the DS library as a whole. Though the top-down view creates some problems, the game is quite enjoyable overall. DS Players looking for a modern GTA experience needn't look further than Chinatown Wars.

While the game's sound effects will be familiar to anyone who has played a Grand Theft Auto game, the signature radio stations are absent, as well as the excellent voice-acting featured since III. The new radio stations are just a few looping generic-sounding music tracks.

Touch screen control is an asset to the game, allowing players to manage game flow, chart routes on the map, hotwire cars, throw explosives, as well as a variety of other things. The four button layout and triggers of the DS perfectly mimic the PlayStation and Xbox controllers, making for a similar control style otherwise.

Players are treated to the standard post-III Grand Theft Auto gameplay that the series has become famous for. In addition, a Drugwars-like minigame has been included (with varying success), as well as a new police evasion system which is a nice new addition.

Liberty City is massive, as is the mission list. While not quite the epic length of its console brothers, Chinatown Wars packs quite a large amount of gameplay.

Grand Theft Auto: Chinatown Wars is the Grand Theft Auto game Nintendo fans have been holding out for since 2002. With its excellent controls, gorgeous city, and consistently fun gameplay, DS owners of the proper age would do well to pick this up.

I really hope the police evasion is integrated in future GTA games. It is probably the best one I've seen in the series.

Ditto on the police evasion -- I love it.

Honestly, I'd be playing this game more if it hadn't crashed on me multiple times.  The whole game will just freeze in the middle of a mission, and I have to reset the system.

Yahtzee's review sounded like the cop cars are still as intelligent as in earlier GTAs (i.e. try to cut you off, miss and hit the wall) and thereby disable themselves if you just keep driving... Sounds like this time destroying a car will lower your wanted level instead of raise it?

I normally just park in the gray area after loosing the cop offscreen, put my ds down and pickit back up 30secs later with no stars. 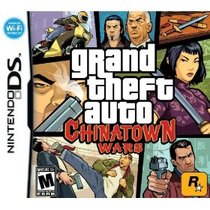