Dragon Quest V: The Hand of the Heavenly Bride

Dragon Quest V: The Hand of the Heavenly Bride harkens back to a different era of role-playing games with its borderline archaic gameplay mechanics. The original incarnation came out for the Super Famicom in 1992 and was remade by ArtePiazza for the PlayStation 2 in 2004. Dragon Quest V for the DS, also remade by ArtePiazza, brings the game stateside for the very first time. The first 16-bit Dragon Quest game is a classic; this wonderful DS remake accentuates that fact.

Part of what makes DQV so impressive is its story, which is structured differently from most RPGs. It begins with the hero's birth and subsequent death of his mother, and then goes on with the hero as a rascally kid, continuing with his life as a young adult, a husband, and a father. While it retains the ridiculous accents that have plagued previous Dragon Quest localizations, it is a pretty compelling tale throughout the game's 20+ hours of playtime.

Although the story might be unique, the basic gameplay isn't anything special. From a first-person perspective, you attack enemies using weapons and magic, and subsequently gain experience and levels. In the original, up to three characters in your party could fight at a time; this is upped to four in the remake. There are many weapons that can be bought or found, including swords, axes, and boomerangs, and almost every playable character learns magic spells as they level up. There is nothing wrong with this archetypal RPG gameplay besides the sense of déjà-vu you get when grinding through random battles. The gameplay is still very fun and gripping; it's just that DQV doesn't bring many new ideas to the table.

One of the few new features introduced in DQV (and found in subsequent entries) is monster collecting, which provides more variety to the set of playable characters. Early in the game you obtain the wagon, which is used to carry excess party members. After that, certain enemies might join you once defeated (according to a probability unique to each enemy). The best thing about the recruitable monsters is that they function as a regular member of your party. The number of enemies that can be recruited total to around 70, and they can learn magic, wield weapons, and wear armor. Including the main protagonists, you can only have a total of eight playable characters in your wagon at one time; excess monsters are watched over by a character in one of the towns. Although the collecting side-quest doesn't quite have the depth of a Pokémon game, it complements the main quest perfectly.

Another high point of the game is its revamped graphics, which gracefully walk the thin line between being faithful to the original and being pleasing to the eye. Specifically, the characters are detailed and colorful, and having the maps spread across the two screens really benefits the game's scope. You can rotate the camera using the L and R buttons to better appreciate the characters and environments. However, this is disorienting because the camera obscures other areas when rotated. Luckily, it can be reset easily by pressing the L and R buttons at the same time.

Besides the updated graphics, the DS remake also adds some touch screen mini-games, such as whack-a-mole. They've been done before, but their organic placements in the game make them a nice distraction from the main quest. The re-mastered musical compositions faithfully update the original's, but, while good, they aren't overly different from the rest of the series' music.

Dragon Quest V is a fantastic RPG. While this conservative update is still mired by old-fashioned game mechanics, the fifth entry in the fabled series is carried by its unique story structure and the once-innovative and still engaging monster collection. It is highly recommended to all RPG fans, but newcomers to the genre should cut their teeth elsewhere.

The remade graphics do a great job of keeping the original's style while updating it for a 3D presentation. The 2D character art, done by series veteran Akira Toriyama, is fantastic as well.

The music is agreeable and varied, but aside from the battle theme, none of the songs are too memorable.

Only using the touch screen for mini-games, the traditional controls are simple to grasp. The camera's positioning is sometimes disorienting but can be remedied quite easily.

Although the basic gameplay is pretty archaic, it is still easy and fun to get into. The monster collecting is interesting and makes the level grinding bearable.

DQV offers somewhere between 20 and 30 fulfilling hours of gameplay. There are a few choices that alter the story, but the changes are minor, and only hardcore fans would labor through a second or third playthrough just to see them.

Dragon Quest V is a classic that is brand new in western markets; if you have any interest in RPGs or the Dragon Quest series, it is a must-play. Its traditional gameplay shows its age, but the monster collecting mechanic and interesting story are still great.

As much as I love Dragon Quest, I have barely touched this game since getting it a few days ago.  Galactrix has dominated my DS, as they arrived together.  But I think it's also because I kept playing DQ4 on and off until just a few weeks ago, and DQ5 is so similar that I don't feel an urgent need to jump into it.  Still, when I finally get around to playing the game seriously, I'm sure it will be awesome.

The game is really great so far, not as good as FFIV DS but still a high quality game. Since I haven't played ANY DQ game before this was a pleasant surprise.

I think the only two Dragon Quest games I played before this were the original on NES and Dragon Warrior Monsters for Game Boy Color (I think).

I was really tempted by DQIV last year, but I'm really glad I held out for DQV because the monster collecting is awesome. Archaic battle system or not, I'm going to be playing this game for a long time.

It is a little weird because no console RPGs really interest me, I'd rather buy the portable remakes and ports of Dragon Quest, Final Fantasy, and other Square Enix games.

I know how you feel, Neal.  Most console RPGs get a big shrug of the shoulders from me.  I just really liked this era of RPGs; I feel most RPGs are too overblown nowadays.

Agreed.
Every now and then I try one of the console RPGs (Eternal Sonata, Lost Odyssey) but they never hook me. Then I pick up DQV, FFIV, or Chrono Trigger DS and I'm hooked.

I think the problem with modern RPGs is that they tend to over complicate things and it doesn't really hook on to people. I do like console RPGs and strategy RPGs but I definitely prefer the older stuff or turn based battles (the sole exception is tales of series and maybe arc rise fantasia).

I never got into real-time. I like ATB, but my RPG affection will always be towards the SNES and other RPGs in that style.

I played a lot more RPGs when I was younger and the games I played were stuff like the Final Fantasy series, Chrono Trigger, SMRPG, Paper Mario, Earthbound...

I famously hate Secret of Mana, although RetroActive might get me to try it again.

Didn't kn ow KDR was into PC games. I have DOW2 but haven't had much chance to play it, and I doubt I'll get much time in the near future because of Empire: Total War but it is a pretty good game.

Anyone know why monsters have stopped asking to join my party?  I just rejoined with Bianca, and it's been hours since any monsters approached me after battle.  I have three or four in the wagon, but it's not full as far as I can tell.

AFAIK, they should still join you, but it'll ask you who should go to Monty's place. That's what happened to me.

Now that this game is brought up again, I find myself going back to it every now and then. It's a lot of fun. 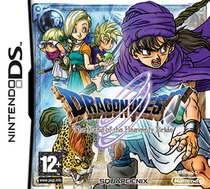